Dems Put Divides Aside, Rally Behind Biden at Convention 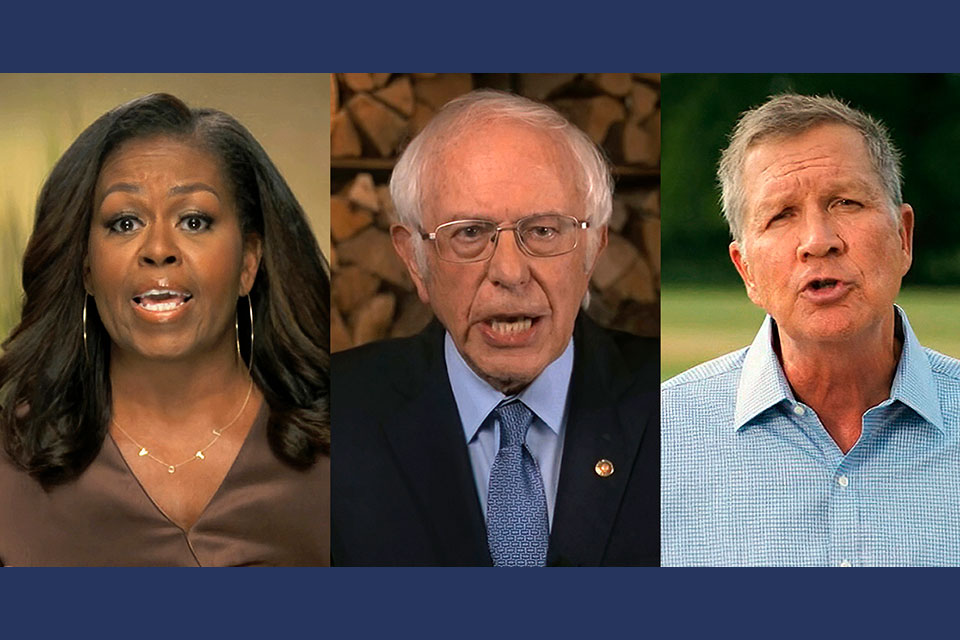 NEW YORK (AP) — Michelle Obama delivered a passionate condemnation of President Donald Trump during the opening night of the Democratic National Convention, declaring him “in over his head” and warning that the nation's mounting crises would only get worse if he's reelected over Joe Biden.

“Donald Trump is the wrong president for our country,” she said.

“He cannot meet this moment. He simply cannot be who we need him to be for us.”

The former first lady was the headliner at the first presidential nominating convention of the coronavirus era. There was no central meeting place or cheering throng during the all-virtual affair Monday night. But it was an opportunity for Democrats — and some Republicans — to rally behind Biden, the party's presidential nominee.

Bernie Sanders, the progressive Vermont senator who was Biden's last standing rival during the primary, encouraged his loyal supporters to vote for the former vice president in November, arguing the nation can't survive another four years of Trump. He notably backed Biden’s plan for tackling health care, one of their most substantive differences in the past. Sanders backs a Medicare for All plan while Biden has called for expanding the current “Obamacare” law.

But it was Michelle Obama, making her fourth convention appearance, who once again delivered an electrifying moment. Wearing a necklace that said “vote,” she tapped into her enduring popularity among Black voters and college-educated suburban women — voters Biden will need to show up in force.

She issued a stark warning to a country already navigating health and economic crises along with a reckoning on racism.

“If you think things possibly can’t get worse, trust me, they can and they will if we don’t make a change in this election,” she said as she issued a call to action for the coalition of young and diverse voters who twice sent her family to the White House. 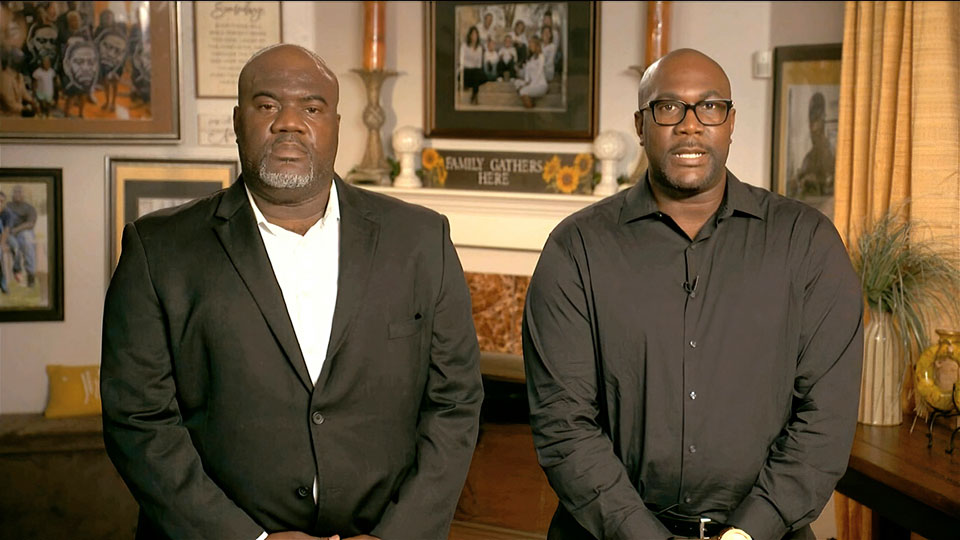 Trump responded to Obama Tuesday, tweeting that he wouldn't be in the “beautiful White House” today if it “weren't for the job done by her husband,” former President Barack Obama. He ended with a sarcastic thanks to Michelle Obama for her “very kind words.”

The president sought to steal focus from the convention on Monday by hosting a political rally in Wisconsin, where Biden’s party had originally planned this week’s convention. He will be on the road again Tuesday, traveling to the southern border in Arizona and reviewing recent storm damage in Iowa. 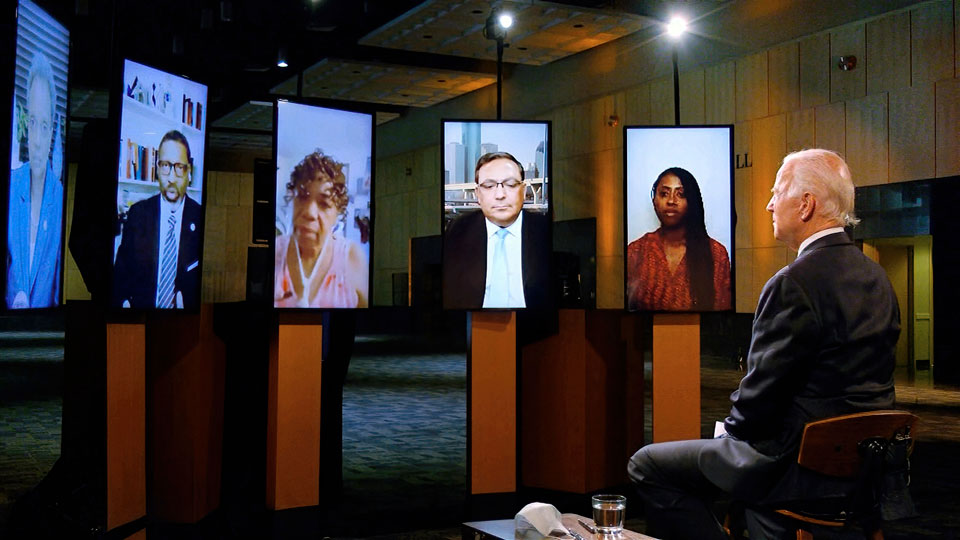 In this image from video, Democratic presidential candidate former Vice President Joe Biden leads a conversation on racial justice with Art Acevedo, Jamira Burley, Gwen Carr, Derrick Johnson and Lori Lightfoot during the first night of the Democratic National Convention on Monday, Aug. 17, 2020. (Democratic National Convention via AP)Biden's wife, Jill, will get top billing at the Democratic convention on Tuesday. A longtime teacher, she'll speak from her former classroom at Brandywine High School near the family home in Wilmington, Delaware.

The convention will culminate with Biden formally accepting the nomination on Thursday.

As the week unfolds, Biden faces questions about whether the convention will energize the disparate factions he hopes to thread into a coalition. He used the opening night to demonstrate the broad ideological range of his supporters.

Monday's speeches were framed by emotional appearances from average Americans touched by the crises that have exploded on Trump’s watch.

Philonise and Rodney Floyd led a moment of silence in honor of their brother, George Floyd, the Minnesota man whose death while in police custody sparked a national moment of awakening on racial injustice.

Also speaking was Kristin Urquiza, an Arizona woman who lost her father to COVID-19, which has killed more than 170,000 people in the United States.

“His only preexisting condition was trusting Donald Trump, and for that, he paid with his life.”

And Rick Telesz, a Pennsylvania farmer, warned that Trump’s trade war has had a “truly a devastating effect” on his farm before the coronavirus brought another blow with what he called “misinformation” coming from the country’s leadership.

“My biggest concern is that if these trends continue with this type of leadership, I will be the last generation farming this farm,” he said.

Democrats abandoned their plans for an in-person gathering in Milwaukee because of the pandemic. The unprecedented gathering is not only testing the bonds of the diverse coalition Biden is building with his running mate, California Sen. Kamala Harris — it's also an experiment in how to run a presidential campaign in the midst of a pandemic.

At this moment, Biden sits in a stronger political position than Trump, who has struggled to expand his political coalition under the weight of his turbulent leadership and prolonged health and economic crises. But 77 days before votes are counted, history is not on the Democratic challenger's side. Just one incumbent president has been defeated in the last four decades.

Polls also suggest that Biden, a 77-year-old lifelong politician, is on the wrong end of an enthusiasm gap. His supporters consistently say they're motivated more by opposition to Trump, who is 74, than excitement about Biden. Democrats hope to shift that dynamic beginning with the convention.

Mrs. Obama, whom Gallup determined was the nation’s most admired woman last year, wowed Democrats at the 2016 presidential convention by coining the phrase: “When they go low, we go high.” She insisted on Monday she was not abandoning that tack, explaining that taking the high road doesn’t mean staying silent. 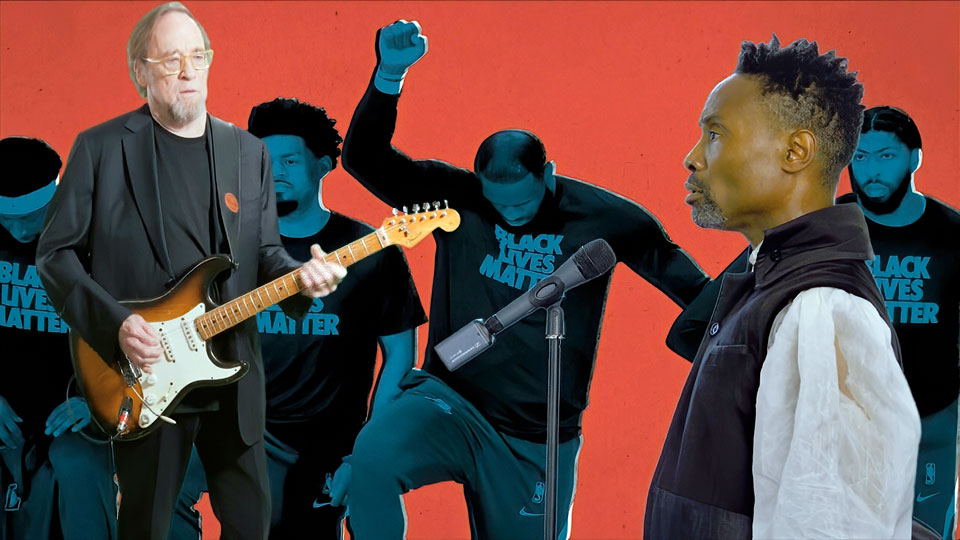 With no live audience for any of the speakers, convention organizers were forced to get creative in their high-stakes quest to generate enthusiasm. There were live appearances from speakers in Texas, South Carolina, Wisconsin and Michigan, but many of the speeches that aired Monday night were prerecorded.

Seeking to inject some family fun into an otherwise serious two-hour video montage, the campaign hosted drive-in viewing stations in six states, much like drive-in movies, where viewers could watch on a big screen from the safety of their vehicles. There were also many online watch parties featuring celebrities and elected officials to make the experience more interactive.

It was unclear how many people attended the parties. In most, only the speakers were visible on screen. In one watch party, Washington Rep. Pramila Jayapal and Massachusetts Sen. Elizabeth Warren rallied progressives, many of whom had preferred Sanders over Biden.

“We must do everything we can to energize and excite our base about the choice before us,” Jayapal said

It was impossible to fully gauge America's interest in the all-virtual format on the first night. Broadcast TV networks are showing the final hour each night live, cable news is showing both hours and many viewers plan to stream from the rivals' websites or on social media.