Radical or Moderate? Trump Paints Democratic Ticket as Both 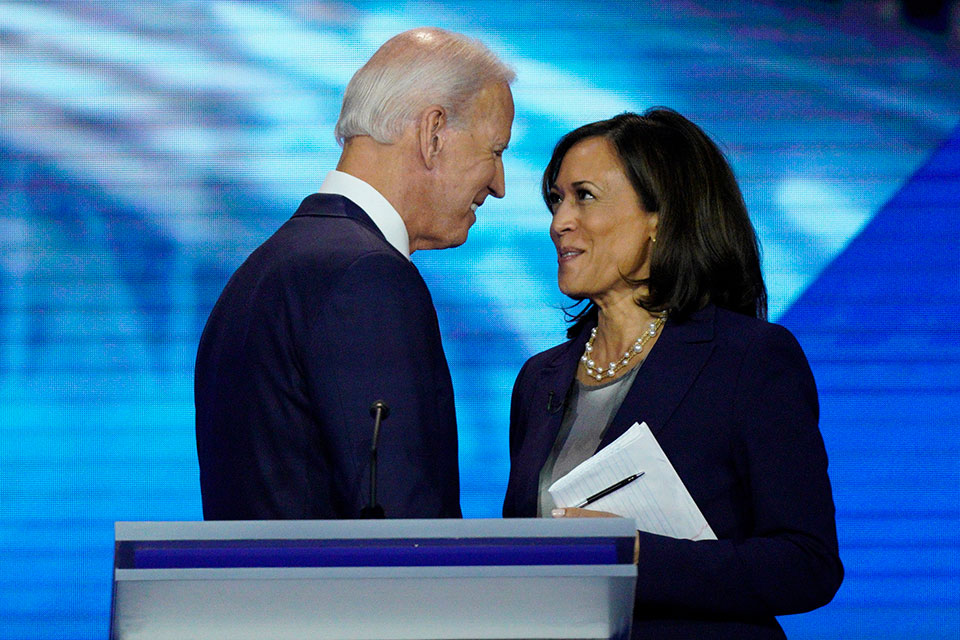 WASHINGTON (AP) — An overzealous prosecutor trying to hide her crime-fighting past — who is also weak on crime. The most radical pick for vice president ever — but too moderate to energize the progressive Democratic base. 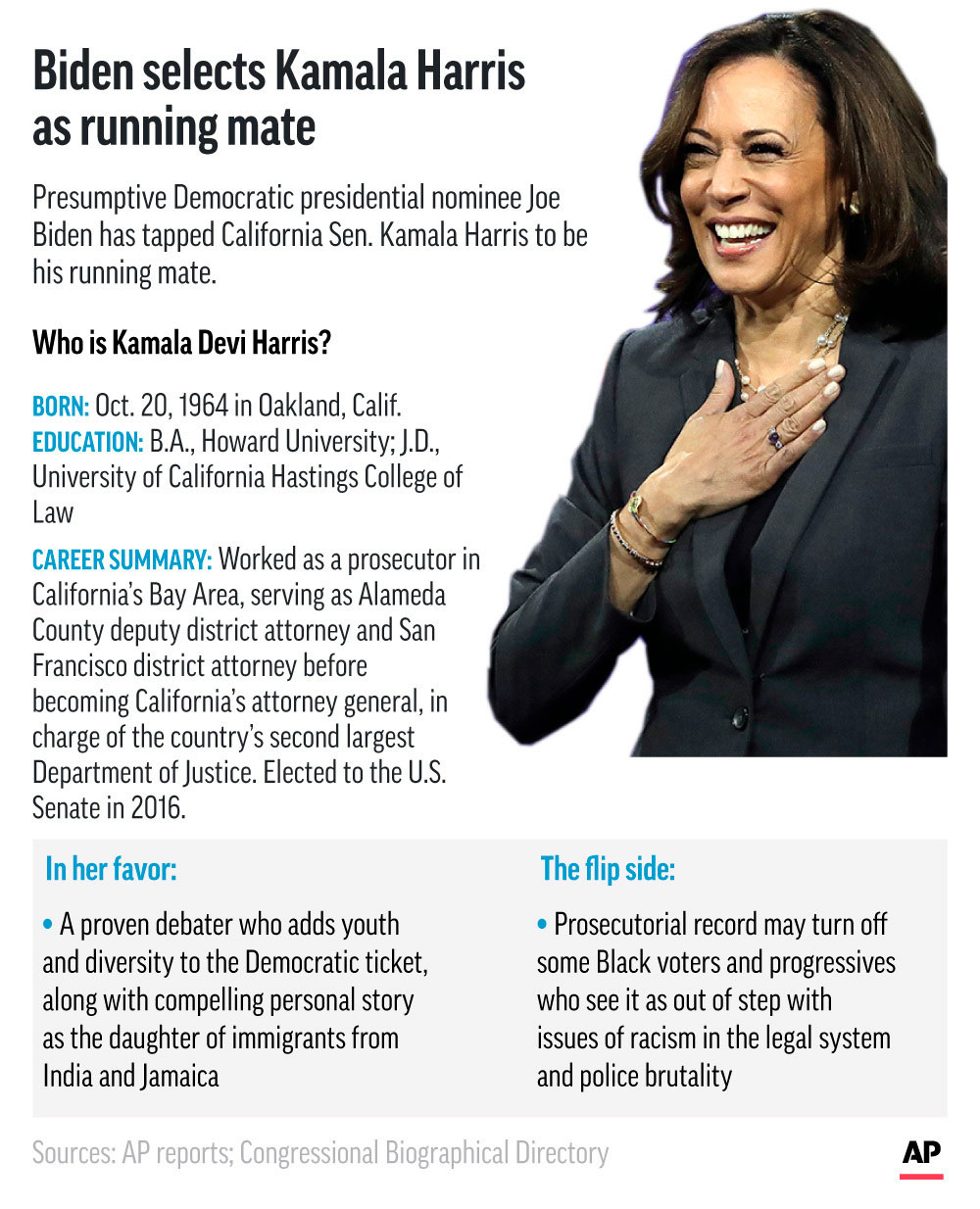 President Donald Trump's campaign is struggling to define Sen. Kamala Harris, Democrat Joe Biden's newly announced running mate. Biden's decision to choose Harris — who ran for president last year in the same pragmatic vein as Biden did and is now the first Black woman to compete on a major party’s presidential ticket — has further complicated the Trump campaign's crude efforts to depict Biden as out of step with the country as Trump continues to lag in the polls.

Less than 90 days out from Election Day, Trump's team faces a pivotal choice in how it tries to define the Democratic ticket, as it looks to reset its strategy and recover from a coronavirus-induced summer slump.

Biden and Harris can't be both. But that hasn't stopped Trump's team from trying to make the incongruous portrayals stick.

“Clearly, Phony Kamala will abandon her own morals, as well as try to bury her record as a prosecutor, in order to appease the anti-police extremists controlling the Democrat Party,” senior campaign adviser Katrina Pierson said in the Trump's campaign's first statement responding to the news.

As Trump's team and his allies tried to present Harris as the “most radical running mate ever,” in the words of Fox News host Sean Hannity, the Republican National Committee sought to frame her as insufficiently liberal, gleefully declaring: “liberals revolt against Biden, Harris ticket.”

"So to sum up: Kamala Harris is a cop — who is an anti-police extremist. A radical leftist — who is causing a ‘revolt’ among Bernie voters.

"A phony — who was too nasty to Joe Biden.

"Got that?" wrote Tim Miller, who previously served as senior adviser to an anti-Trump political action committee and an RNC spokesperson.

In his own response, Trump, who saw Harris as a potentially formidable challenger had she won the Democratic nomination, has reverted to his usual playbook, resorting to sexist and racist attacks aimed to stoke white grievance. He repeatedly called Harris “nasty” and has leaned into appeals that appear stuck in a fictionalized version of the 1950s.

“The ‘suburban housewife’ will be voting for me.

"They want safety & are thrilled that I ended the long running program where low income housing would invade their neighborhood. Biden would reinstall it, in a bigger form, with Corey Booker in charge!” he tweeted Wednesday, referring to Sen. Cory Booker, the former mayor of Newark, New Jersey, who is also Black.

Although Trump told reporters in the White House briefing room that the California senator had been his “No. 1 draft pick,” the candidate he felt would be most beneficial to his own chances, that's not what he said privately less than 48 hours earlier.

Trump hoped for Bass or Rice

As Air Force One returned to Washington from a weekend in New Jersey on Sunday night, Trump turned to the senior staffers and friends assembled on the plane to discuss Biden’s impending choice. Assessing the Democratic field, Trump said he thought California Rep. Karen Bass or former national security adviser Susan Rice would give him the biggest boost, according to two White House officials and Republicans close to the president who spoke to The Associated Press on condition of anonymity because they were not authorized to publicly discuss the private conversations. But Biden instead opted for Harris, avoiding some of the tripwires the Trump campaign had hoped to set.

The president’s struggle to define Harris seemed evident immediately. Referring to notes in the White House briefing room, Trump called Harris “nasty” and categorized her as the most liberal member of the Senate, an allegation that surely came as a surprise to self-described democratic socialist Bernie Sanders and the progressive Elizabeth Warren.

On Fox News Channel, the hours after Biden’s announcement served as a Harris punching fest, with host after host and panels testing various lines of attack. After a guest corrected Tucker Carlson’s pronunciation of Harris’ first name (She writes in her autobiography that it's pronounced “'comma-la,' like the punctuation remark.") Carlson responded angrily, “So what?”

A 'fine choice' two weeks ago

Biden campaign spokesperson Andrew Bates accused Trump of struggling “in vain attempts to tear the American people apart and distract the country from his devastating mismanagement with clumsy, bigoted lies," and called him "dumbfounded after Joe Biden’s selection of a strong running mate who he himself said not two weeks ago would be a ‘fine choice.'”

One Trump campaign official who spoke on condition of anonymity to discuss strategy said the mixed messages were aimed at different audiences — the political equivalent of Trump's campaign trying to have its cake and eat it, too — as it looks to animate its own supporters against “radicals” and sow apathy across the aisle.

But the lack of a clear, consistent message — as Trump deployed with devastating effect against “Crooked Hillary” Clinton in 2016 — could portend trouble closer to Election Day.

Trump’s campaign has been plotting for almost two years to characterize the Democratic nominee and running mate as beholden to the “radical left,” though that met its greatest test with Biden, who remains well known and relatively well-liked among voters after a 40-plus-year career in Washington.

Harris campaign run as a moderate

Harris, who dropped out of the Democratic presidential primary in December, ran her own race as a relative moderate in the field. The former California attorney general also served as district attorney in San Francisco, and her record in law enforcement came under scrutiny and turned away some liberals and younger Black voters who saw her as out of step on issues of racism in the legal system and police brutality.

Yet on a conference call with reporters responding to the news Tuesday evening, Trump’s campaign continued to push the narrative that Harris is a “leftist” pushing a “radical agenda.”

“This has completed the leftist takeover of the party and of their radical agenda,” said Republican Sen. Marsha Blackburn of Tennessee, who claimed Harris “will be the most liberal leftist nominee for VP that our country has ever seen" and cited her support for the Black Lives Matter group.

“With this move to left," she predicted, "what you’re going to see is a lot of security moms that are all across this nation who are going to say, ‘You know what? Law and order is important to me.... Security in our communities is important and I don’t want someone who says that they are not going to be tough on hardened criminals.’”

On the same call, Pierson went after Harris' record as attorney general, saying that “she fought to keep inmates locked up in overcrowded prisons so they could be used for cheap labor" and that she “championed laws that put parents in jail and prosecuted the mentally ill.”