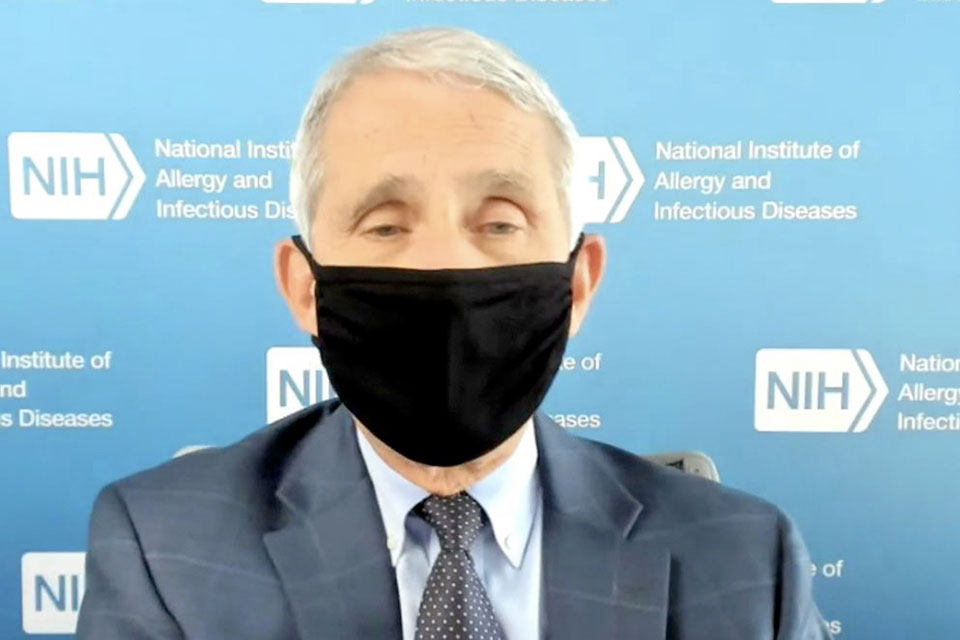 During a 30-minute interview with BlackPressUSA that was streamed live, Dr. Anthony Fauci, director of the National Institute of Allergy and Infectious Diseases, spoke of the importance of convincing African Americans to participate in clinical trials. He also said that school re-openings should depend mainly upon the location and the infection rate in a given area. View the full video below.

Fauci also said a viable coronavirus vaccine is likely only a few months away.

“The fundamental principle is that we should try as best as we possibly can to get children back to school because we know the psychological aspect of that and the unintended consequences for mothers and fathers who may need to stop working, so we should try to get back to school,” Dr. Fauci said when asked about the impact of the pandemic on the upcoming school year.

“However, paramount needs to be the safety, health, and welfare of children, teachers, and families,” Dr. Fauci added.

“We live in a big country. Some places have low incidents and can open schools while some are high. Some areas rate of infection is so high where it’s not prudent to open schools. You don’t want to endanger their health.”

Despite Trump, Fauci still in with WHO

A member of the White House Coronavirus Task Force, Fauci has at times found himself at odds with President Donald Trump. For example, earlier this year, the president announced that he would withdraw U.S. funding and support for the World Health Organization (WHO). However, Dr. Fauci told BlackPressUSA that he still maintains a close relationship with the organization.

“I still work closely with the World Health Organization,” said Dr. Fauci. “I’m on a weekly phone call with them, and I signed a memorandum of understanding. We’re all in with the WHO.”

“Early on, there was a shortage of masks because we didn’t want to take masks away from health providers who needed them,” Dr. Fauci remarked. “It’s easy to get a cloth mask now.”

Dr. Fauci explained further that, “when there are droplets when someone sneezes or coughs, you [are protected]. You can take it and wash it with soap and water or stick it in the washing machine.”

Health disparity is the reality

Addressing the disparities surrounding COVID-19 and other illnesses, Dr. Fauci pointed to many African Americans, Latinx, and Native Americans occupying essential jobs that provide employees with little — or no — protection.

“On the one hand, there’s a greater opportunity and risk of getting infected, but even as important is that once you get infected, you have prevalence and incidence of co-morbidities that make it more likely you’ll get a severe outcome from the infection,” Dr. Fauci noted.

"It’s very clear that African Americans have a higher incidence, and the reality is that you suffer more.”

The hospitalization rates per 100,000 people are stunning when comparing African Americans and Caucasians, Dr. Fauci proclaimed.

“In many respects, it’s unacceptable that it should be that way,” he said, noting that the hospitalization rate per 100,000 African Americans stands at 247, compared to 53 per 100,000 whites.

“In other words, that’s almost five times the chance of getting hospitalized even though African Americans comprise just 13 percent of the [U.S.] population,” Dr. Fauci observed.

“That’s more than something we need to deal with.”

There are 5 things we can all do

Dr. Fauci added that there are five fundamental things everyone could do to help stop the spread of the coronavirus.

“Wear a mask, avoid crowds of more than 10, keep a distance of at least six feet, locations should seriously consider closing bars and getting people who go to bars to stop or do it outside, and wash hands frequently either with soap and water or alcohol Purell.”

“We hope that we will have an effective vaccine by the end of the year, which means that as we get into 2021, we want to distribute it for those who could benefit,” he added.

“We need to spend extra effort to protect African Americans, and the way you find out if the vaccine is effective is the enrollment in a vaccine trial. It would be a terrible shame if African Americans stayed away from clinical trials, and they didn’t provide for themselves the vaccine that could protect them.”

Dr. Fauci suggested that he wears a mask everywhere goes and demanded that doing so shouldn’t be about politics.

“This is about protecting each other. We’re all in this together,” Dr. Fauci said.

“I’m pleased to see that we now have the president talking about wearing a mask where he didn’t before, and the vice president wears a mask everywhere he goes. We’ve got to pull together.”

Whether reinfection of the coronavirus can occur remains somewhat of a mystery, Dr. Fauci explained.

“When you get infected with any virus, generally, when you recover, your body has made a good immune response to recover,” Dr. Fauci noted.

“We know that happens in people who had COVID-19. We don’t know what the duration of that is. There are varying levels of antibodies in people who recover, and what we’re following is how long they last. Some people find that it doesn’t last very long.”

“There are other types of immunity that go beyond, and they’re called T-cells or cellular immunity, which may also play a role in protecting people from being infected. Likely a degree of protection is pretty good for a finite period.

“There are no well-documented cases of people actually being re-infected. There have been some anecdotally stories of people recovering who seemed to have gotten infected, but we don’t know. There’s no real hard evidence that’s happening.”