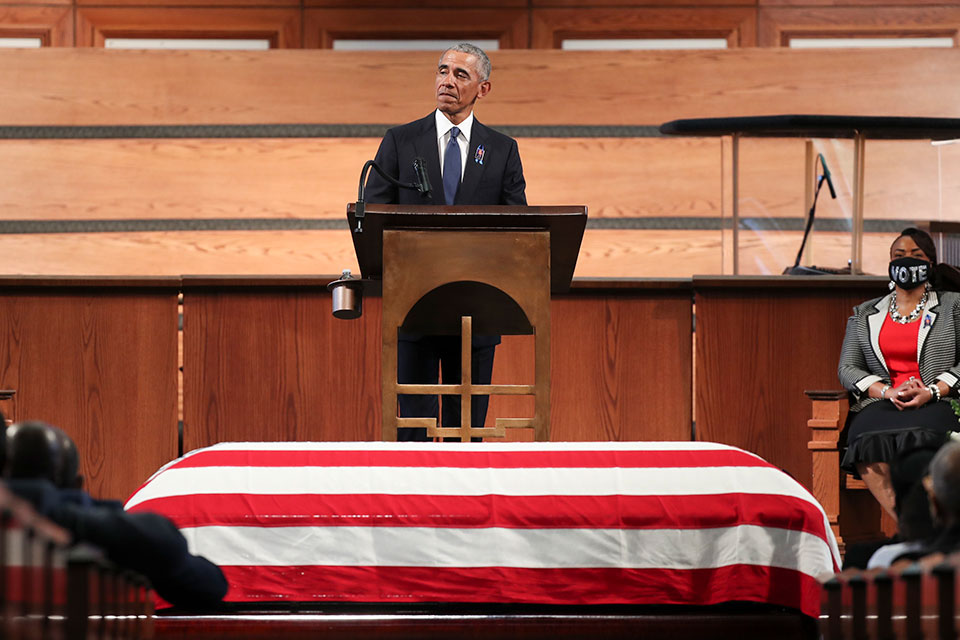 ATLANTA (AP) — John Lewis was mourned, revered and celebrated as an American hero on Thursday at Atlanta's Ebenezer Baptist Church, a sacred place for many of those who helped to shape civil rights history.

View video of Barack Obama delivering the eulogy for John Lewis below.

Three former presidents joined in the eulogies after nearly a week of mourning that took him from his birthplace in Alabama to the nation’s capital of Washington to his final resting place in his home of Atlanta. 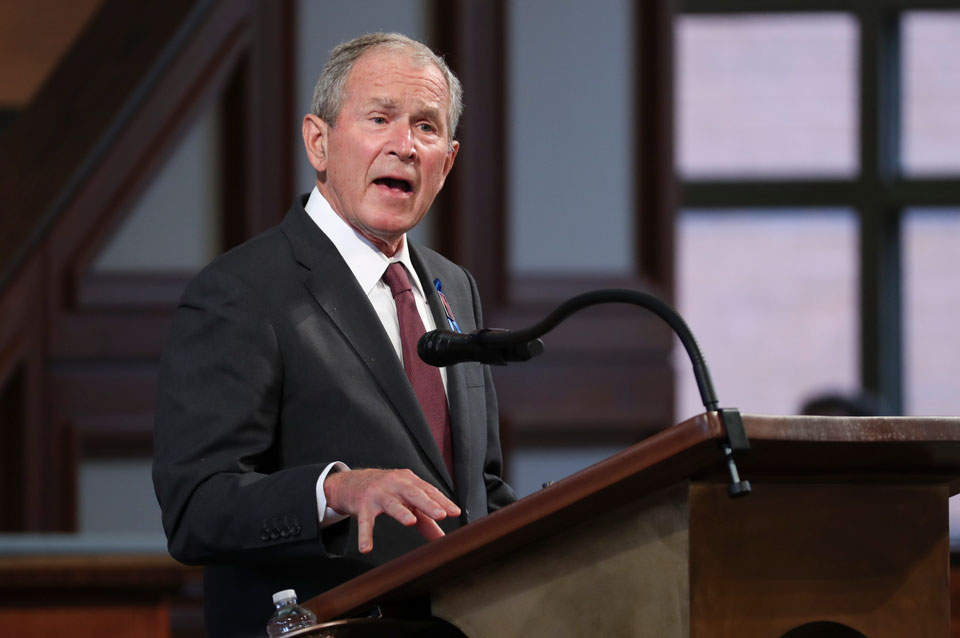 Former President George W. Bush speaks during the funeral service for the late Rep. John Lewis, D-Ga., at Ebenezer Baptist Church in Atlanta, Thursday, July 30, 2020. (Alyssa Pointer/Atlanta Journal-Constitution via AP, Pool)“He always believed in preaching the Gospel in word and in deed, insisting that hate and fear had to be answered with love and hope,” former President George W. Bush said from the pulpit. Lewis died July 17 at the age of 80.

Pelosi recalled how Lewis' body was lying in state at the U.S. Capitol earlier this week, and a double rainbow appeared.

“There was this double rainbow over the casket," she said. “He was telling us, ‘I'm home in heaven, I'm home in heaven.' We always knew he worked on the side of angels, and now he is with them.” 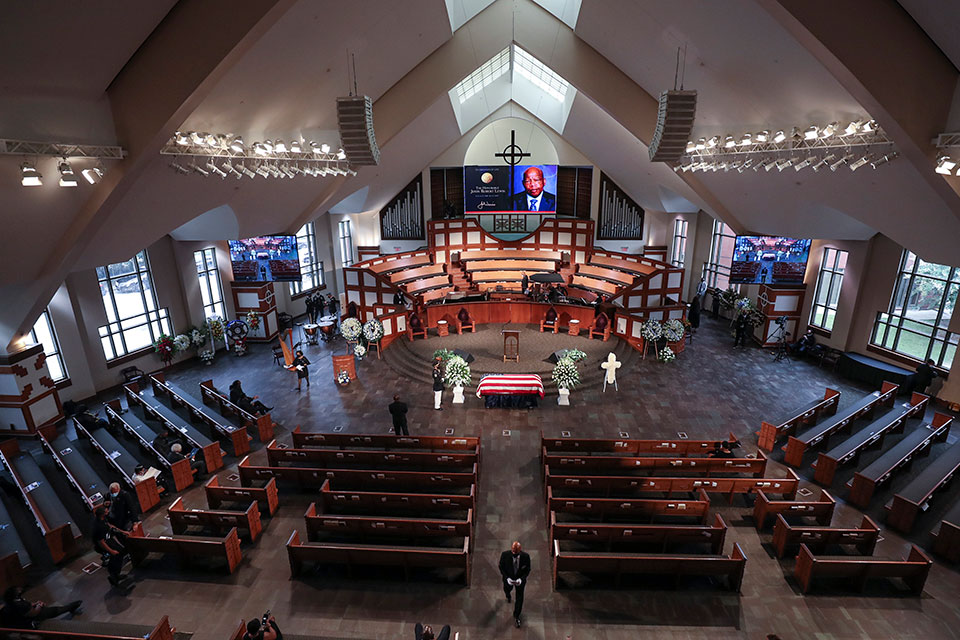 The scene is set for the funeral service for the late Rep. John Lewis, D-Ga., at Ebenezer Baptist Church in Atlanta, Thursday, July 30, 2020. (Alyssa Pointer/Atlanta Journal-Constitution via AP, Pool)The arc of Lewis’ legacy of activism was once again tied to Ebenezer’s former pastor Martin Luther King Jr., whose sermons Lewis discovered while scanning the radio dial as a 15-year-old boy growing up in then-segregated Alabama.

King continued to inspire Lewis’ civil rights work for the next 65 years as he fought segregation during sometimes bloody marches, Greyhound bus “Freedom Rides” across the South and later during his long tenure in the U.S. Congress. 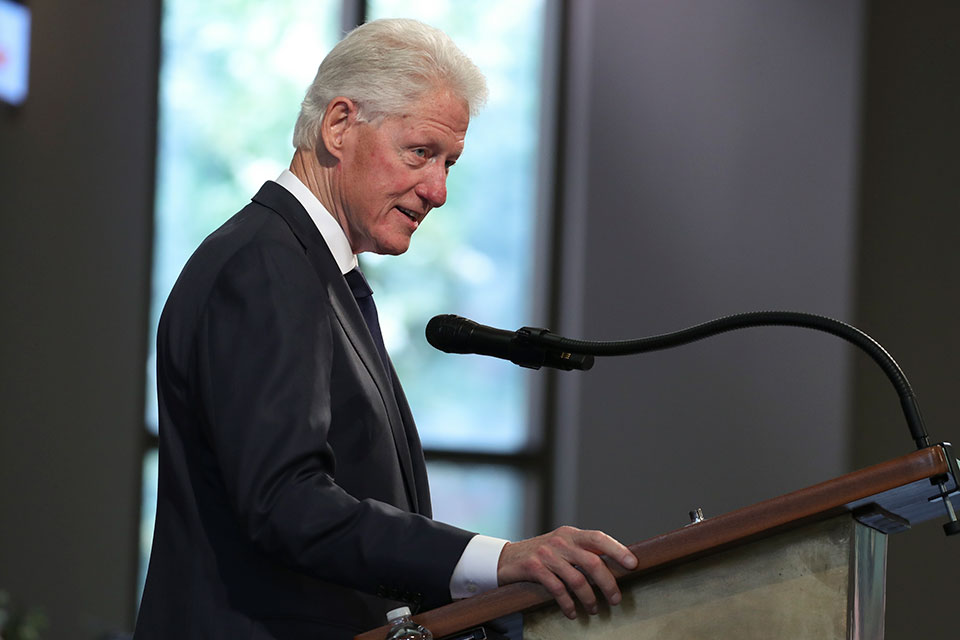 Former President Bill Clinton speaks during the funeral service for the late Rep. John Lewis, D-Ga., at Ebenezer Baptist Church in Atlanta, Thursday, July 30, 2020. (Alyssa Pointer/Atlanta Journal-Constitution via AP, Pool)One of King's daughters, the Rev. Bernice King, led the congregation in prayer: “We will continue to get into good trouble as long as you grant us the breath to do so,” she said.

“Here lies a true American patriot who risked his life for the hope and promise of democracy,” Ebenezer’s senior pastor, the Rev. Raphael Warnock, told the congregation.

Outside Ebenezer, hundreds gathered to watch the service on a large screen outside the church. Some sang the gospel song “We Shall Overcome.”

When Lewis was 15, he heard King's sermons on WRMA, a radio station in Montgomery, Alabama, he recalled in an interview for the Southern Oral History Program. 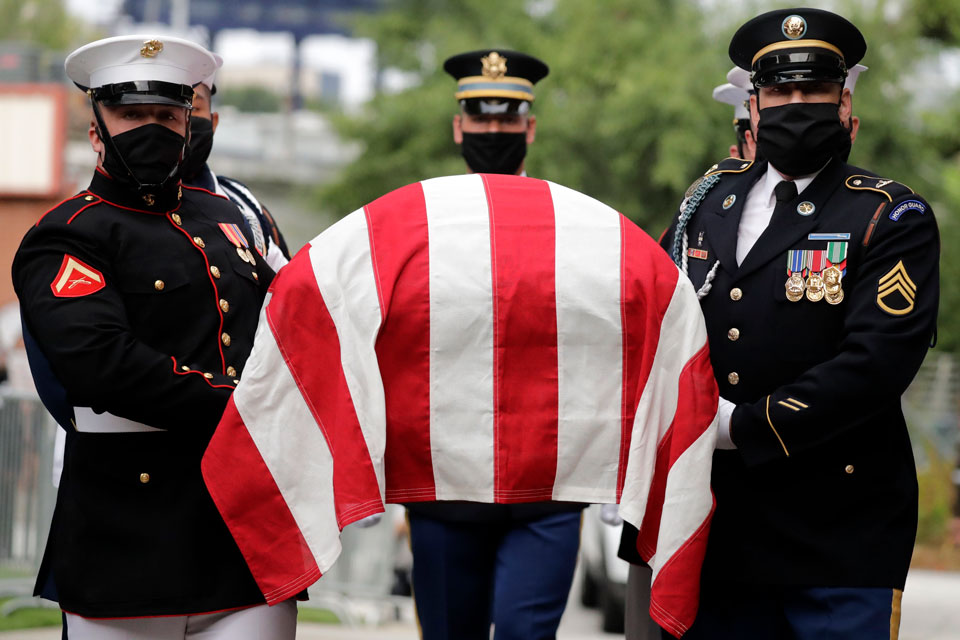 A military honor guard moved the casket of Rep. John Lewis into Ebenezer Baptist Church for his funeral, Thursday, July 30, 2020, in Atlanta. Lewis, who carried the struggle against racial discrimination from Southern battlegrounds of the 1960s to the halls of Congress, died Friday, July 17, 2020. (AP Photo/Brynn Anderson)King was “the person who, more than any other, continued to influence my life, who made me who I was," Lewis wrote in his 1998 autobiography, “Walking with the Wind."

By the summer of 1963, Lewis was addressing thousands of people during the March on Washington, where King gave his “I Have a Dream" speech. He spoke then about Black people beaten by police and jailed — themes that resonate vividly in today's times.

“My friends, let us not forget that we are involved in a serious social revolution," Lewis told the huge crowd on the Washington Mall.

“To those who have said, ‘Be patient and wait,' we have long said that we cannot be patient," he added. “We do not want our freedom gradually, but we want to be free now! We are tired. We are tired of being beaten by policemen. We are tired of seeing our people locked up in jail over and over again."

In 1965, Lewis was beaten by Alabama state troopers in the city of Selma in what became known as “Bloody Sunday."

Last Sunday, his casket was carried across the Edmund Pettus Bridge in Selma. The wagon rolled over a carpet of rose petals on the bridge that spans the Alabama River. On the south side of the bridge, where Lewis was attacked by the law officers, family members placed red roses that the carriage rolled over, marking the spot where Lewis spilled his blood and suffered a head injury.

Lewis was later awarded the Medal of Freedom by the nation’s first Black president in 2011.

He spent more than three decades in Congress, and his district included most of Atlanta.

Shortly before he died, Lewis wrote an essay for The New York Times and asked that it be published on the day of his funeral. In the piece published Thursday, Lewis recalled the teachings of King:

“He said we are all complicit when we tolerate injustice," Lewis wrote. “He said it is not enough to say it will get better by and by.

"He said each of us has a moral obligation to stand up, speak up and speak out."

“Though I may not be here with you, I urge you to answer the highest calling of your heart and stand up for what you truly believe," Lewis added. “In my life I have done all I can to demonstrate that the way of peace, the way of love and nonviolence is the more excellent way. Now it is your turn to let freedom ring."

Clinton referenced the essay during his remarks Thursday: “It is so fitting on the day of his service, he leaves us his marching orders: Keep moving.”