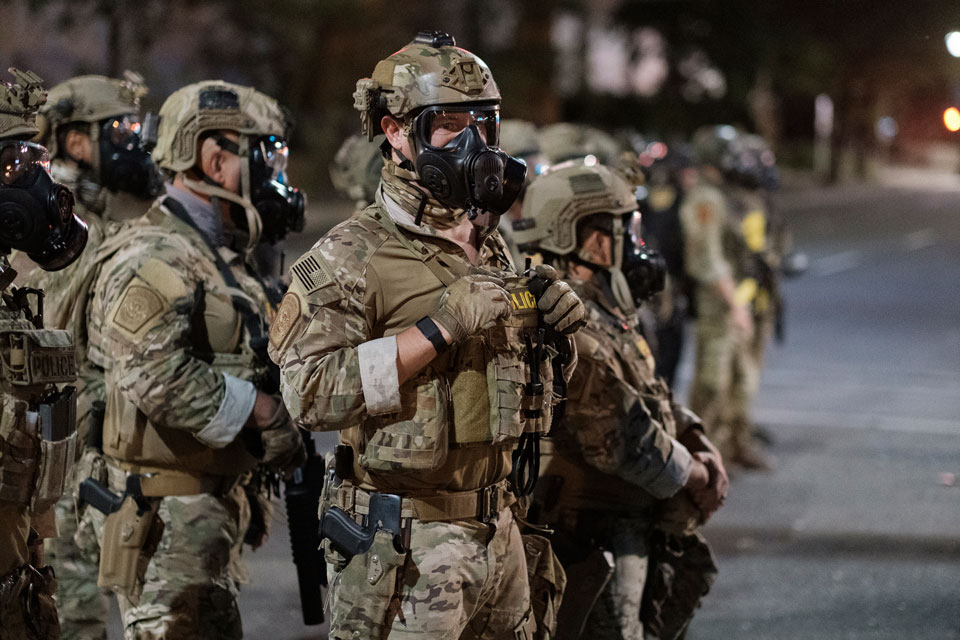 PORTLAND, Ore. (AP) — Protesters who have clashed with authorities in the Pacific Northwest are not just confronting local police. Some are also facing off against federal officers whose presence reflects President Donald Trump's decision to make cracking down on “violent mayhem” a federal priority.

The Department of Homeland Security has deployed officers in tactical gear from around the country, and from more than a half-dozen federal law enforcement agencies and departments, to Portland, Oregon, as part of a surge aimed at what a senior official said were people taking advantage of demonstrations over the police killing of George Floyd to commit violence and vandalism. 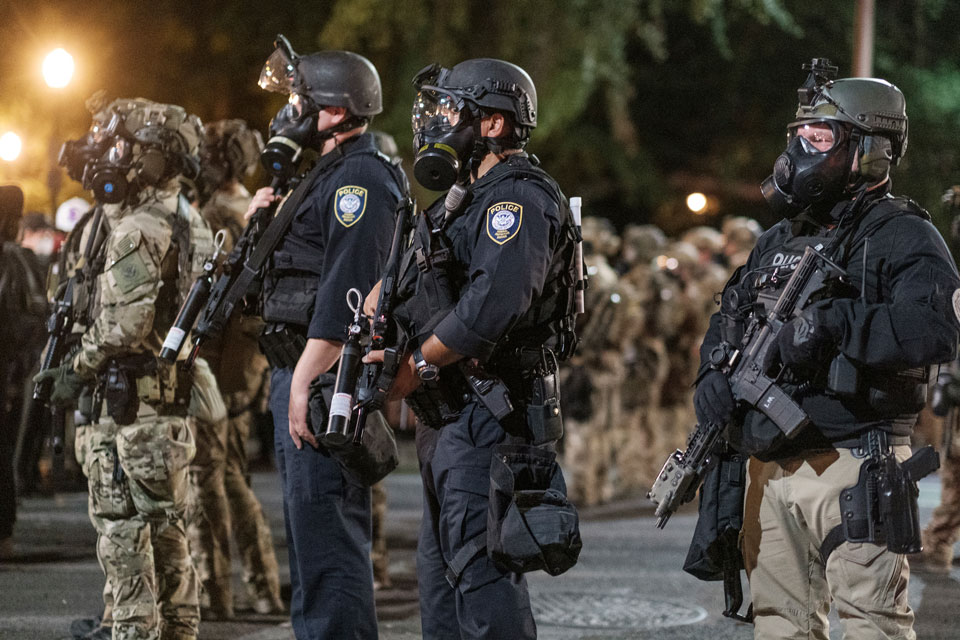 In this photo provided by Doug Brown, agents from different components of the Department of Homeland Security are deployed to protect a federal courthouse in Portland, Ore., on Sunday, July 5, 2020. Protesters who have clashed with authorities in Portland are facing off not just against city police but a contingent of federal agents who reflect a new priority for the Department of Homeland Security: preventing what President Donald Trump calls "violent mayhem." The agents clad in military-style uniforms include members of an elite Border Patrol tactical unit, and their deployment to protect federal buildings and monuments is a departure for an agency created to focus on threats from abroad. (Doug Brown via AP)“Once we surged federal law enforcement officers to Portland, the agitators quickly got the message,” said the official, speaking on condition of anonymity to discuss an ongoing operation.

The deployment represents somewhat of a departure for DHS, which was created after the Sept. 11, 2001, attacks and is primarily focused on threats from abroad and border security. During the Trump presidency, its focus has been largely on carrying out the president’s tough immigration agenda. Now it is in the role of supporting Trump’s law-and-order campaign, raising questions about overstepping the duties of local law enforcement.

Portland Deputy Police Chief Chris Davis said his department did not request the assistance and did not coordinate efforts with the federal government amid often chaotic clashes that have ranged across several downtown blocks after midnight for weeks.

“I don’t have authority to order federal officers to do things,” Davis said. “It does complicate things for us.”

The DHS officers’ presence comes at an incredibly tense moment for Portland. After Floyd’s death, the city for days saw marches and rallies that attracted more than 10,000 generally peaceful Black Lives Matter protesters to the downtown area. The police took a “mostly hands-off approach” to those events because they were orderly, Davis said.

Civil liberties advocates and activists have accused federal authorities of overstepping their jurisdiction and excessive use of crowd-control measures, including using tear gas and patrolling beyond the boundaries of federal property. Portland police are prohibited from using tear gas under a recent temporary court order unless they declare a riot.

“DHS should go back to investigating the rise of white supremacist activity and actors who are seeking to cause violence against these peaceful protests, that is under the purview of the agency’s mission,” said Andrea Flores, the deputy director of immigration policy at the American Civil Liberties Union who was a DHS official during the Obama administration.

Trump issued an executive order on June 26 to protect monuments after protesters tried to remove or destroy statues of people considered racist, including a failed attempt to pull down one of Andrew Jackson near the White House.

The president has denounced the Black Lives Matter movement and protests calling for the removal of statues honoring racist figures, associating peaceful protests with the sporadic outbursts of vandalism and looting at some demonstrations. He referred to “the violent mayhem we have seen in the streets of cities that are run by liberal Democrats,” as well as the “merciless campaign to wipe out our history," in his July 3 Mount Rushmore speech. 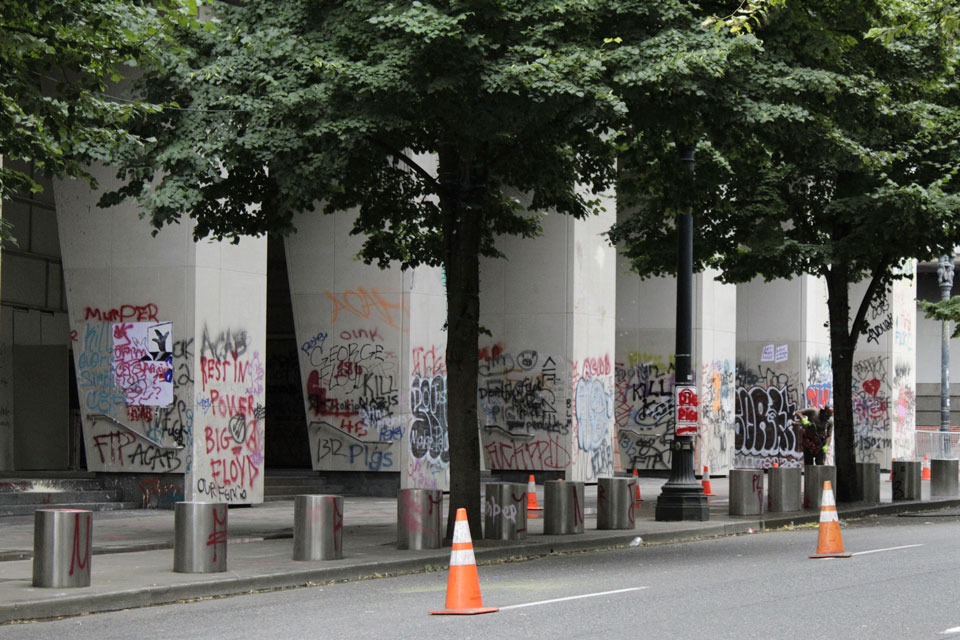 Graffiti from recent demonstrations covers pillars outside of the Mark O. Hatfield Federal Courthouse in downtown Portland, Ore., on Wednesday, July 8, 2020. Protesters who have clashed with authorities in Portland, Ore., are facing off not just against city police but a contingent of federal agents who reflect a new priority for the Department of Homeland Security: preventing what President Donald Trump calls "violent mayhem." The agents clad in military-style uniforms include members of an elite Border Patrol tactical unit, and their deployment to protect federal buildings and monuments is a departure for an agency created to focus on threats from abroad. (AP Photo/Gillian Flaccus)Following the executive order, DHS created the Protecting American Communities Task Force and sent officers from Customs and Border Protection and other agencies to Washington, D.C., Seattle and Portland. Others were ready to deploy elsewhere if needed.

Improving coordination among law enforcement agencies is part of DHS's mission. It also oversees the Federal Protective Service, which guards federal government buildings around the nation.

But the FPS doesn’t have the resources to respond to the kind of sustained attacks that have taken place in Portland and elsewhere on the margins of protests over the May 25 killing of Floyd in Minneapolis.

Federal Protective Service Officer David Underwood was shot and killed outside a federal building in Oakland during a protest in May. Authorities charged an Air Force staff sergeant affiliated with the far-right, anti-government “boogaloo” movement with his murder.

As local governments in Washington, D.C., and Portland have stepped back to allow space for peaceful demonstrations, the Trump administration has stepped up its effort against what the senior official called “opportunistic criminals."

Attorney General William Barr says there have been more than 150 arrests on federal charges around the country, with about 500 investigations pending related to recent protests. There were at least seven in Portland in recent days.

Portland police officials say the cycle of nightly attacks, which have shut down much of the downtown, has been unprecedented. Early Thursday, a man in a SUV fired several times into the air as he drove away from protesters who had surrounded his car. “We’ve never seen this intensity of violence and focused criminal activity over this long period of time," Davis said.

Among the federal forces deployed in Portland are members of an elite Border Patrol tactical team, a special operations unit that is based on the U.S.-Mexico border and has been deployed overseas, including to Iraq and Afghanistan.

BORTAC members, identifiable by patches on their camouflage sleeves, are mixed in with Federal Protective Service outside the courthouse. Others in the unit, which includes snipers, have been stationed in “overlook” positions on the courthouse's ninth floor, where a protester in a black hoodie shined a green laser into the eyes of one of the officers on Monday, according to court documents.

The night before, a BORTAC agent tackled and arrested a demonstrator suspected of pointing a laser at him and others from a park across the street from the courthouse.

A former DHS official said BORTAC agents were viewed as “highly trained, valuable, scarce resources” and would typically be used for domestic law enforcement in extraordinary circumstances. “These units don’t normally sit around idle,” said the official, who spoke on condition anonymity because he no longer works at the agency, after serving under Trump and President Barack Obama, and is not authorized to discuss operations.

“What did they get pulled off of in order to watch over statues?”