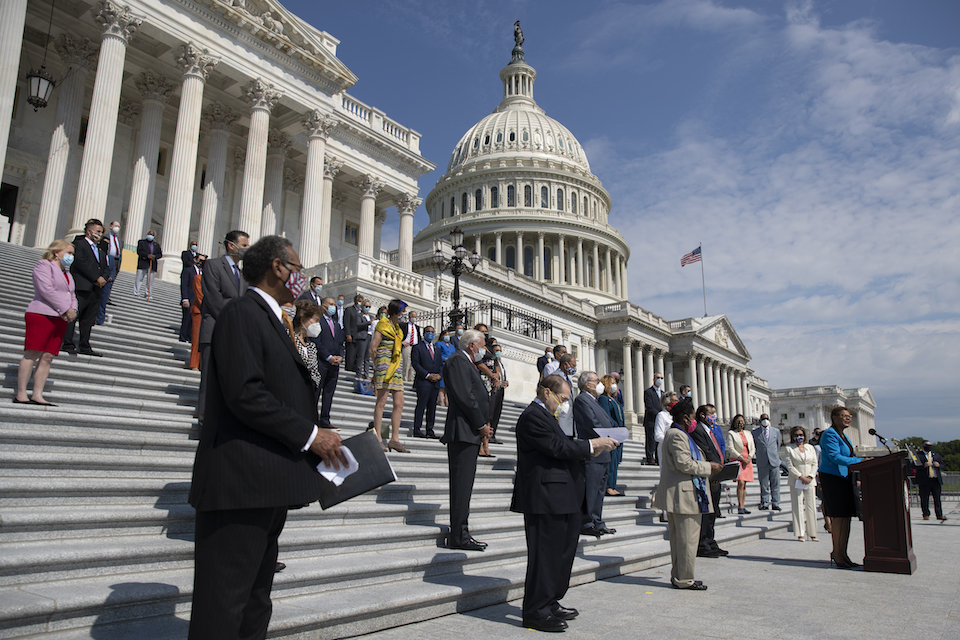 WASHINGTON (AP) — For a moment, Congress had a chance to act on a policing overhaul, mobilized by a national trauma and overwhelming public support. Those efforts have stalled now and seem unlikely to be revived in an election year.

It’s latest example of how partisanship and polarization on Capitol Hill have hamstrung Congress’ ability to meet the moment and respond meaningfully to public opinion.

Major changes in policing policy appear likely to join gun control and immigration as social issues where even with Americans' overwhelming support, their elected representatives are unable or unwilling to go along, especially when President Donald Trump is indifferent or opposed.

“In this moment, as it was with gun violence and immigration reform, we don’t know where the president really is," said Sen. Chris Coons, D-Del., who weeks ago was expressing skepticism weeks ago about a breakthrough. “If this were the first time we were in this situation, I’d be more hopeful," he said then.

The bipartisan outcry over the deaths of George Floyd and other Black Americans appeared to be a chance for Congress to reshape its reputation. Polls showed nearly all Americans in a favor of some measure of change to the criminal justice system, and both chambers moved quickly to draft legislation.

There were common elements in the House Democratic proposal and the Senate Republican bill, including a national database of use-of-force incidents by law enforcement and restrictions on police chokeholds. But efforts to bridge the divides bogged down in a predictable fight over process and exposed again how little trust there is between the Senate's leaders, Mitch McConnell, R-Ky., and Chuck Schumer, D-N.Y.

McConnell said Democrats refused to take him at his word that he was willing to negotiate over the final bill, and he pitched a supposedly fair and freewheeling floor debate. Schumer and other Democrats saw little that was genuine in McConnell's overtures, noting that during his tenure as GOP leader, the sharp-elbowed Kentucky Republican has permitted almost no open floor debate on legislation.

The swift rise and fall of prospects for the police bill showed how lawmakers are often driven more by the views of their parties’ hard-liners than overall public opinion.

“The incentive structure is misaligned for compromise. That’s the reality of it. Members are more likely to be rewarded electorally for representing their base primary voters than for reaching out to voters in the middle,” said Michael Steel, who was a top aide to former House Speaker John Boehner, R-Ohio.

“The giants of yesteryear are remembered as such because voters rewarded them for successfully legislating. And that just seems to be less and less the case.”

There are other high-profile examples where public support has been unable to overcome partisanship in Congress — most notably on gun control. An AP-NORC survey from March 2019 found 83% of Americans in favor of a federal law requiring background checks on all potential gun buyers. Trump has also supported the idea.

But gun control legislation has gone nowhere in Washington.

The parties have also failed to make progress in overhauling immigration laws, despite broad public support.

The most overwhelmingly popular measure — granting legal protections to young people brought to the U.S. illegally as children — has gotten caught in the fray, with hundreds of thousands of such “Dreamer” immigrants caught in legal limbo.

This gridlock has been exacerbated by Trump’s reputation on Capitol Hill as an unreliable negotiating partner on major issues.

On policing, he spoke generally about supporting legislation but exerted little political capital when the process hit a roadblock.

“To do really hard things you always need a president leaning in and engaged,” said Brendan Buck, a top aide to former Speaker Paul Ryan, R-Wis., during Trump’s first two years in office. “And on the really hard things he has not shown a willingness to get engaged.”

The police debate also suffered from the realities of the political calendar. With the Congressional Black Caucus, progressive activists and the civil rights community all calling the Republican bill too weak to be salvaged, some Democrats saw little incentive to give ground now when they might be able to get more if their party has sweeping successes in the November elections, now just over four months away.

“Why cut a bad deal now when you could potentially be in the driver’s seat to write a real bill that effects real change in just a few months?” said Matt House, a former Schumer aide.

Some veteran lawmakers have found ways to navigate the fierce partisanship on Capitol Hill.

GOP Sen. Lamar Alexander, chairman of the Senate Health, Education, Labor and Pensions Committee, and the committee's top Democrat, Patty Murray of Washington, have shepherded a major education policy rewrite and legislation to combat opioids through a McConnell-led Senate.

They did so by building sweeping consensus among lawmakers in both parties before committee or floor action.

Murray said in an interview that there was little attempt to do that kind of behind-the-scenes work on policing.