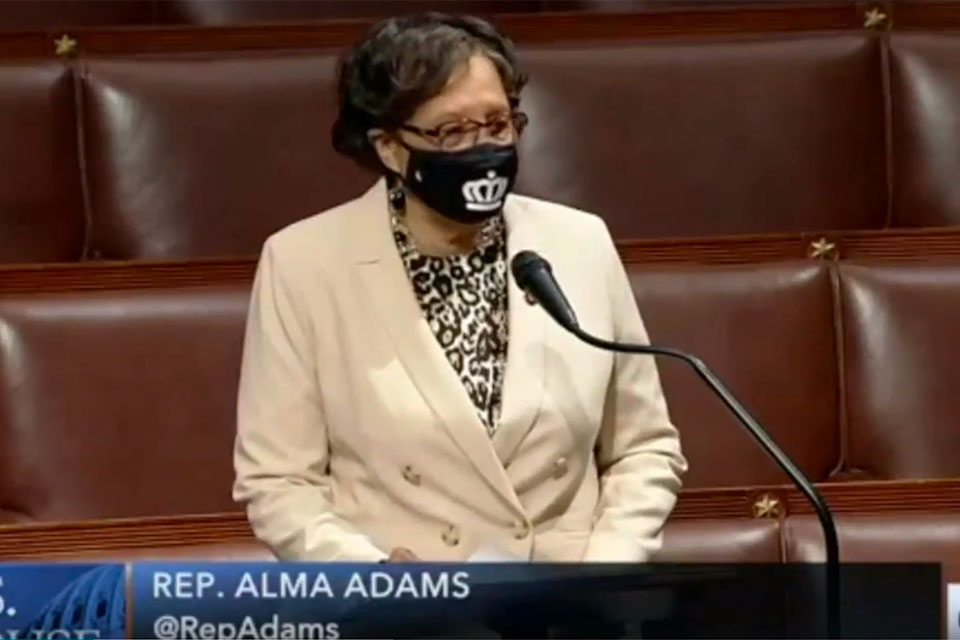 Washington, D.C. - Today, Congresswoman Alma Adams (NC-12) delivered a speech on the floor of the U.S. House of Representatives in support of the George Floyd Justice in Policing Act.

Remarks, as prepared for delivery, are below:

Mr./Madam Speaker, today I rise to speak in support of H. R. 7120, the George Floyd Justice in Policing Bill.

Too many of our neighbors have died at the hands of law enforcement.

Valuable people, Beloved people, who were siblings, coworkers, parishioners, members of our communities, parents, children, grandchildren, are now hashtags. They’re household names who would all trade that fame for just one more day with their friends, families, and loved ones.

Across the country we’ve learned too many names, but not as many people know their ages:

In Mecklenburg County, in my district, we have too many names, over 50 since the year 2000. People of every race and background:

David McAtee, fifty-three, was killed by the Kentucky National Guard while protesting these injustices.

They begged they couldn’t breathe.

Imagine what God will say to us on Judgment Day if we fail to act.

The George Floyd Justice in Policing Act is our first step to righting these wrongs.

Importantly, the bill bans chokeholds, so that a death like George Floyd’s or Eric Garner’s never has to happen again.

Additionally, it will force police departments nationwide to reexamine the use of chemical agents like tear gas, bringing us closer to a day when protesters exercising their constitutional right won’t choke, both figuratively and literally, on injustice.

It was a tragedy that George Floyd will, in the words of Roxie Washington, never get to walk his daughter down the aisle. But like their six-year-old daughter Gianna said, “Daddy changed the world.”

Let’s do right by Gianna. Let’s make good on her promise of change.

Thank you, and I yield back.

Fact Sheet on the George Floyd Justice in Policing Act:

The George Floyd Justice in Policing Act is the first-ever bold, comprehensive approach to hold police accountable, end racial profiling, change the culture of law enforcement, empower our communities, and build trust between law enforcement and our communities by addressing systemic racism and bias to help save lives. The Justice in Policing Act would: 1) establish a national standard for the operation of police departments; 2) mandate data collection on police encounters; 3) reprogram existing funds to invest in transformative community-based policing programs; and 4) streamline federal law to prosecute excessive force and establish independent prosecutors for police investigations.

The George Floyd Justice in Policing Act of 2020 will:

Congresswoman Alma Adams represents North Carolina’s 12th Congressional District (Charlotte) and serves as Vice Chair of the House Committee on Agriculture. Additionally, she serves on the House Financial Services Committee and the House Education & Labor Committee, where she serves as Chair of the Workforce Protections Subcommittee. In 2015, she founded the Adams Hunger Initiative to address food insecurity across Charlotte, Mecklenburg County, and the 12th Congressional District.