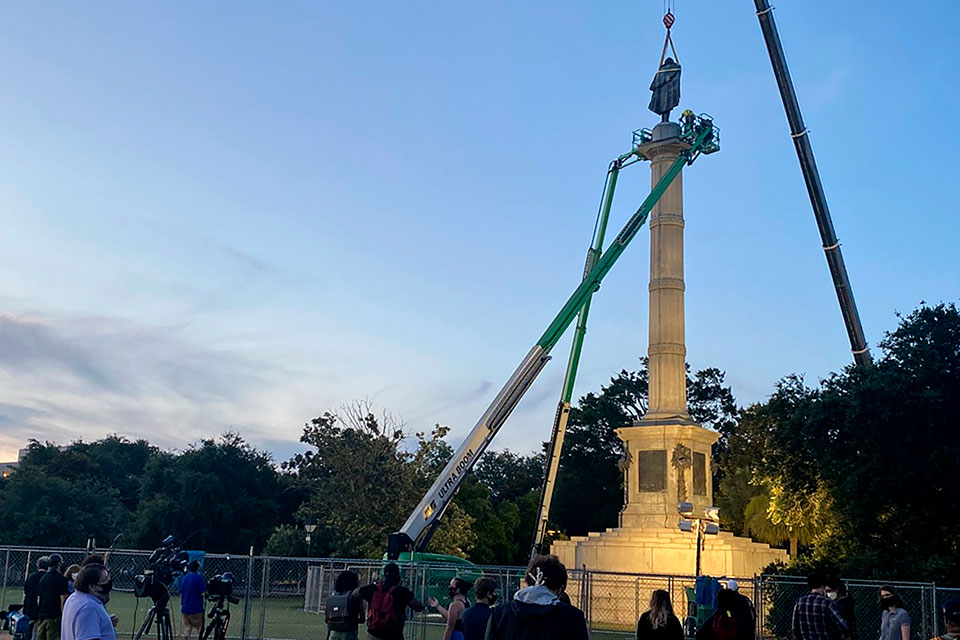 CHARLESTON, S.C. (AP) — The historic South Carolina city of Charleston was removing a symbol of its legacy on Wednesday, with crews working through the night to take away a statue honoring John C. Calhoun, an early U.S. vice president whose zealous defense of slavery led the nation toward civil war.

But the larger-than-life figure of Calhoun — known as "The Cast-Iron Man” in the early 1800s for his unbending support of Southern states' rights — was proving difficult to dislodge. After a nightlong struggle, contractors decided to bring in a diamond cutter to cut through a metal shaft securing his statue to a pedestal that towers more than 100 feet (30 meters) over a downtown square along Calhoun Street. 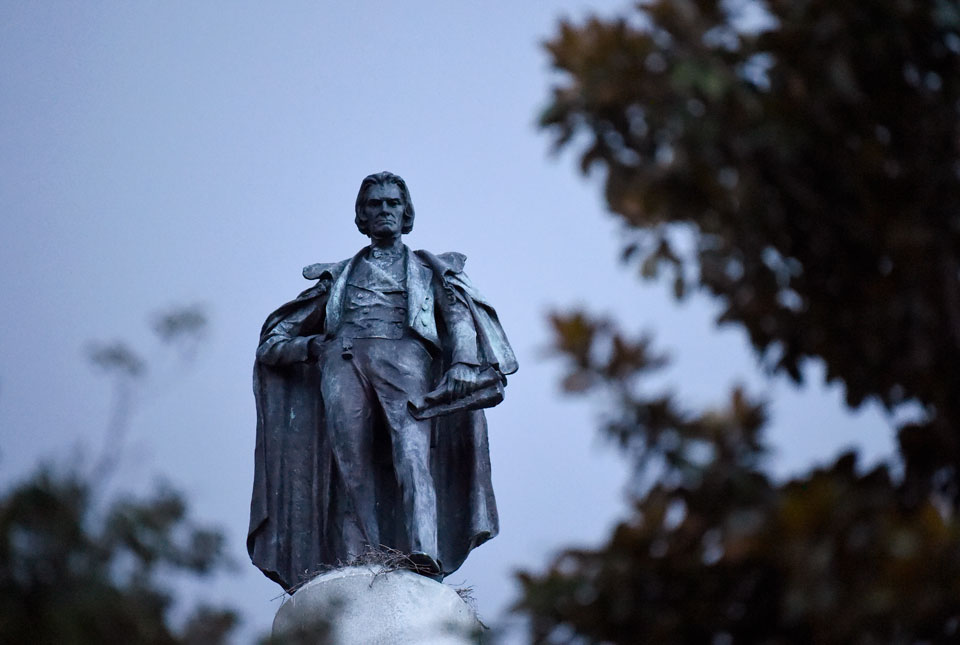 The council heard from both sides

“I believe that we are setting a new chapter, a more equitable chapter, in our city’s history,” said the mayor, John Tecklenburg.

“We are making the right step. It’s just simply the right thing for us to do.”

Dozens of residents spoke for and against the statue at Tuesday's council meeting. 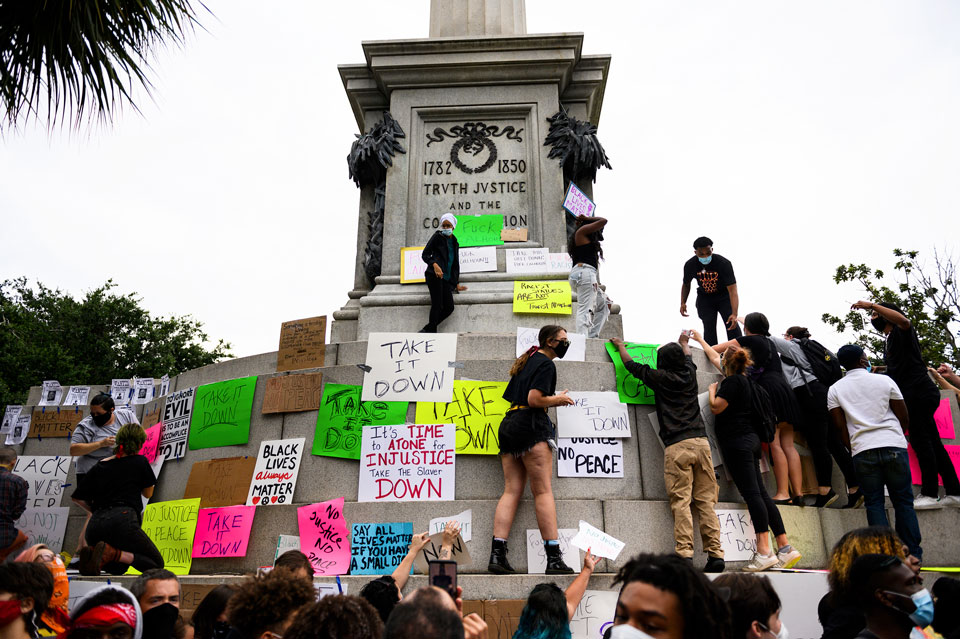 EDS NOTE: OBSCENITY - In this Wednesday, June 17, 2020, photo, protesters write messages on the statue of John C. Calhoun at Marion Square in Charleston, S.C. Protesters were unhappy with the city's decision to move the statue to a museum at a later date, instead asking for it to be taken down and thrown away immediately. (Josh Morgan/The Greenville News via AP)Grace Clark, a Charlestonian who said her family has lived in the city since the late 18th century, asked them "to please not remove our history. Not all history is good but it is our history.”

Clark suggested a notion that city leaders had considered in the past: adding contextual information about Calhoun's history with slavery, rather than taking down the monument. "We are doing what we can to honor the Black men and women. We’re Charlestonians. We’re south Carolinians. We’re better than this,” she said.

Councilman Karl L. Brady Jr. said he would vote his conscience despite any political consequences, showing that in Charleston, “we place white supremacy and white supremacist thought back where it belongs -- on the ash heap of history.”

Timing of the decision aligns with current and historical events

The move comes days after the fifth anniversary of the slaying of nine Black parishioners in a racist attack at a downtown Charleston church. It also comes as cities around the U.S. debate the removal of monuments to Confederate leaders and others, and as thousands of Americans join street protests in the wake of George Floyd's death under a Minneapolis police officer's knee.

When Tecklenburg announced his plans a week earlier, dozens of protesters linked arms around the monument, shouting, “Take it down!” Some spray-painted the monument's base; police said they made several arrests for vandalism.

The Calhoun Monument stood since 1898 in the heart of downtown Charleston, towering over a sprawling square where locals and tourists alike enjoyed festivals. But several event organizers said recently that they would no longer use the space while the statue remained.

About 40% of enslaved Africans brought to North America came through the port city of Charleston, which formally apologized in 2018 for its role in the slave trade. The city's resolution says many see the statue "as something other than a memorial to the accomplishments of a South Carolina native, but rather a symbol glorifying slavery and as such, a painful reminder of the history of slavery in Charleston.”

Calhoun’s support of slavery, which he called a “positive good,” never wavered.

He said in speeches on the U.S. Senate floor in the 1830s that slaves in the South were better off than free Blacks in the North. With his pro-slavery “Calhoun Doctrine,” he led the South toward secession before he died in 1850.

South Carolina’s Heritage Act protects historical monuments and building names, but the mayor said the monument is not on public property, nor does it commemorate one of the historical events listed in the act. According to the National Parks Service, the city technically leases the land, which “is to be kept open forever as a parade ground for the Sumter Guards and the Washington Light Infantry.”

Thus far, Tecklenburg’s interpretation has not been legally disputed. A two-thirds General Assembly vote is required to make any changes under the Heritage Act. That's tough in a state where conservatives dominate the House and Senate, but it happened in 2015 when the Confederate flag was removed from Statehouse grounds.

Gov. Henry McMaster, a former prosecutor, described the Heritage Act on Tuesday as a “good state law” and a “deliberate process that is not influenced by passion and time.” As for the mayor's interpretation, he said, “It depends on how you read the Heritage Act, and there are people who read it in different ways.”

Several Black lawmakers are urging local governments and colleges to act unilaterally in defiance of the Heritage Act because it carries no stated penalties and hasn’t faced a court challenge, and several are planning to do so.

The Calhoun statue’s ultimate resting place will be decided by a special panel. The mayor has anticipated it would go to a local museum or educational institution.