What does the US Supreme Court Ruling on DACA Program Achieve? 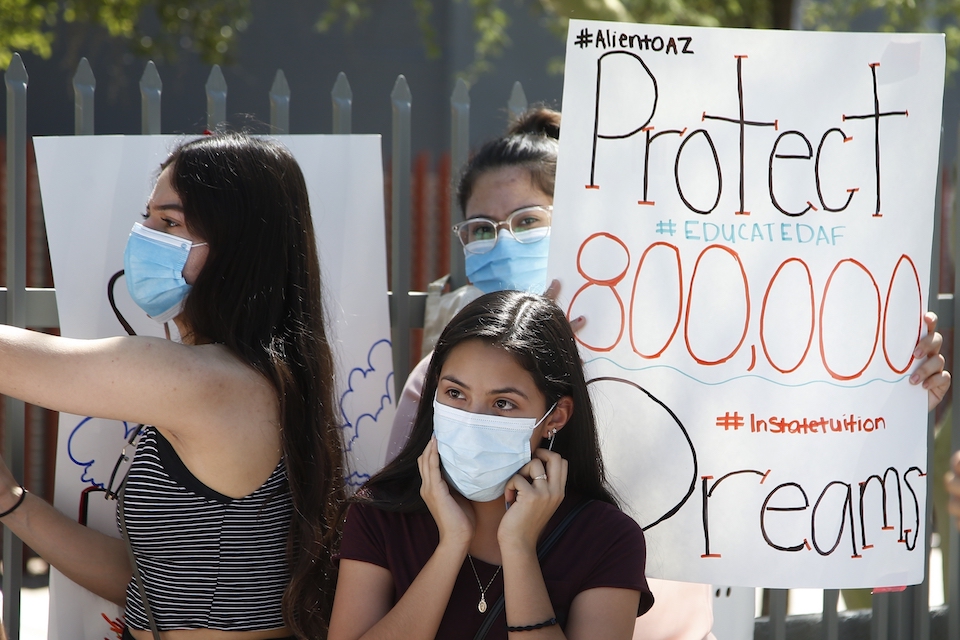 PHOENIX (AP) — The U.S. Supreme Court has upheld the program that protects immigrants who were brought to the country as children and allows them to work.

Trump attempted to end the Deferred Action for Childhood Arrivals program in 2017 shortly after being elected on a largely anti-immigrant platform. Here’s what the high court’s decision means:

The Deferred Action for Childhood Arrivals program was created in 2012 by the administration of then-President Barack Obama. Obama was under pressure by young activists who staged sit-ins at congressional offices and protested outside the White House,.

They were immigrants brought to the U.S. as children who had grown up here. And they wanted laws to protect their immigration status. Largely known as Dreamers after the D.R.E.AM. Act, the failed legislation would have granted them a pathway to citizenship.

DACA allows them to legally work and shields them from deportation. But it was limited to those who were between 15 and 30 years old, who were attending or graduated from high school and who didn’t have a felony criminal record. The fee to apply and renew is nearly $500.

Many original DACA recipients were college students who faced stark job prospects after graduation because they couldn’t legally work. Now, many of the 650,000 people who are enrolled in DACA are working professionals;some are even parents and grandparents. At its height, nearly 800,000 people were enrolled in the program.

Why did President Donald Trump try to end DACA?

President Donald Trump, while campaigning in 2016, vowed to end DACA, but then softened his stance before finally having his administration announce its demise in September 2017.

The administration argued the program was illegal and that although he didn’t favor punishing children for the actions of their parents, “we must also recognize that we are nation of opportunity because we are a nation of laws.”

His administration has also cited a lower court’s ruling striking down an expansion of DACA that would have applied to parents as another reason to end the program.

Texas and other states threatened to sue the administration over the program after having sued to stop an expansion of it during the Obama years. Immigrant advocates filed legal challenges to Trump’s decision, and appeals courts left the program alive, but only for people who were already enrolled.

At a hearing before the justices last November, the administration’s attorney argued that it had taken responsibility for its decision and that it had the authority to end DACA even if it is legal because it’s bad policy.

“We own this,” Solicitor General Noel Francisco said.

On Thursday, the U.S. Supreme Court said that while Trump could end the program, he did so improperly. That means the administration can try again if it chooses, as it did successfully when its 2017 travel ban was initially rejected in court. Experts say that's not likely to happen before the election in part because DACA has wide, bipartisan support among the American public. Even if it were to try again, it couldn't get through the federal rule-making process by the November elections.

The Supreme Court’s decision to keep DACA intact means the 650,000 people who are enrolled will keep their protections, which last two years. But the program hasn’t accepted any new applicants in a couple of years, and it’s unclear whether people who would have qualified for the program but couldn't apply after Trump announced he was rescinding it will now be able to apply.

Sarah Pierce, a policy analyst at the Migration Policy Institute, said the Trump administration is unlikely to take new applicants without a lower court’s order. “It’s up in the air,” Pierce said.

Is there another solution?

There have been many efforts to pass legislation that would provide legal status and a path to citizenship for Dreamers, but even plans with bipartisan support have fallen flat. After Trump tried to end the program in 2017, he gave Congress six months to come up with a solution. They did not.

Pierce said she also is not hopeful that Congress will pass any legislation addressing Dreamers.

“They’ve been trying to legislate something on Dreamers for almost two decades now, and they haven’t been able to do,” Pierce said. “If the program continues administratively, I am not hopeful that Congress will move forward with any long-term changes, at least in the short term. Anything related to immigration is very political.”

The last time Congress moved to pass a bill that would provide a pathway to citizenship, the administration had a long list of demands that pleased hardliners but cost broader support.