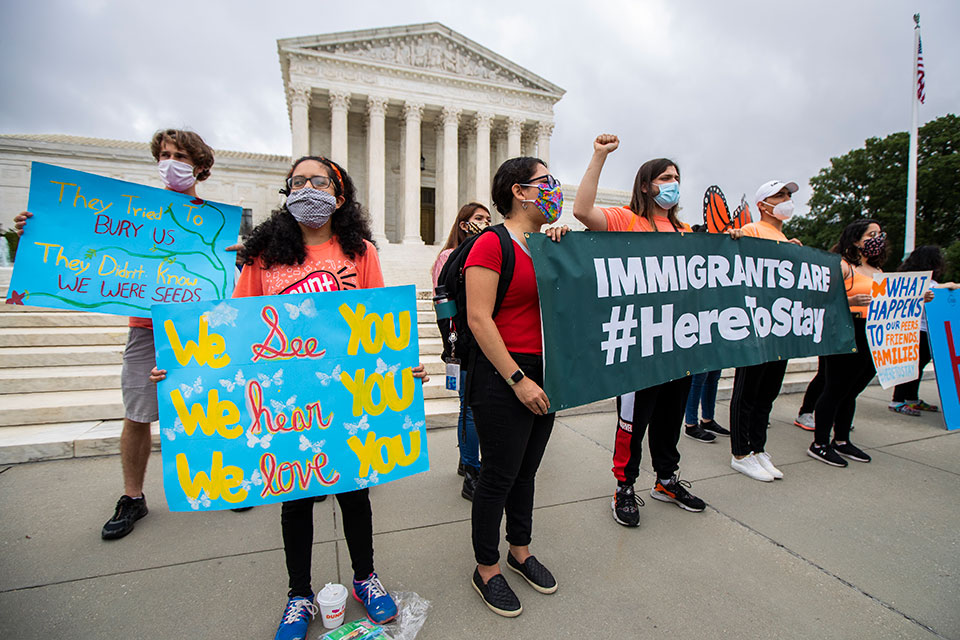 WASHINGTON (AP) — The Supreme Court on Thursday rejected President Donald Trump’s effort to end legal protections for 650,000 young immigrants, the second stunning election-season rebuke from the court in a week after its ruling that it's illegal to fire people because they're gay or transgender.

For now, the young immigrants retain their protection from deportation and their authorization to work in the United States.

The 5-4 outcome, in which Chief Justice John Roberts and the four liberal justices were in the majority, seems certain to elevate the issue in Trump's campaign, given the anti-immigrant rhetoric of his first presidential run in 2016 and immigration restrictions his administration has imposed since then.

The justices rejected administration arguments that the 8-year-old Deferred Action for Childhood Arrivals Program is illegal and that courts have no role to play in reviewing the decision to end DACA. The program covers people who have been in the United States since they were children and are in the country illegally. In some cases, they have no memory of any home other than the U.S.

Trump didn't hold back in his assessment of the court's work, hitting hard at a political angle.

“These horrible & politically charged decisions coming out of the Supreme Court are shotgun blasts into the face of people that are proud to call themselves Republicans or Conservatives. We need more Justices or we will lose our 2nd Amendment & everything else. Vote Trump 2020!" he wrote on Twitter, apparently including the LGBT ruling as well.

In a second tweet, he wrote, “Do you get the impression that the Supreme Court doesn’t like me?"

Roberts wrote for the court that the administration did not pursue the end of the program properly.

“We do not decide whether DACA or its rescission are sound policies,“ Roberts wrote. “We address only whether the agency complied with the procedural requirement that it provide a reasoned explanation for its action. Here the agency failed to consider the conspicuous issues of whether to retain forbearance and what if anything to do about the hardship to DACA recipients.”

The Department of Homeland Security can try again, he wrote. But any new order to end the program, and the legal challenge it would provoke, would likely take months, if not longer. 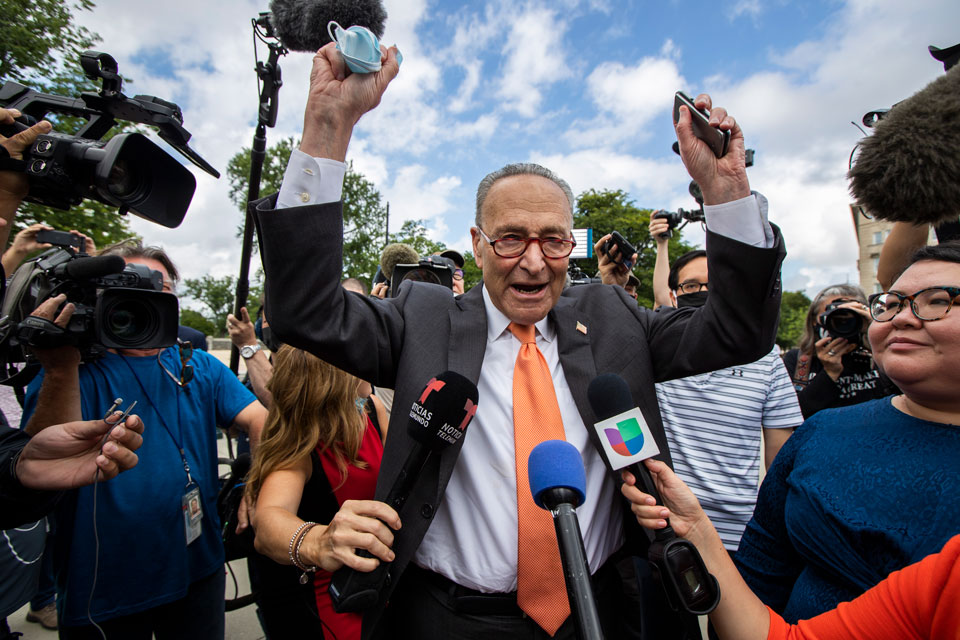 Senate Majority Leader Chuck Schumer of N.Y., center, celebrates with Deferred Action for Childhood Arrivals (DACA) recipients and supporters in front of the Supreme Court on Thursday, June 18, 2020, in Washington. (AP Photo/Manuel Balce Ceneta)The court’s four conservative justices dissented. Justice Clarence Thomas, in a dissent joined by Justices Samuel Alito and Neil Gorsuch, wrote that DACA was illegal from the moment it was created under the Obama administration in 2012. Thomas called the ruling “an effort to avoid a politically controversial but legally correct decision.”

Alito wrote that federal judges had prevented DACA from being ended “during an entire Presidential term. Our constitutional system is not supposed to work that way."

Justice Brett Kavanaugh wrote in a separate dissent that he was satisfied that the administration acted appropriately in trying to end the program.

DACA recipents were elated by the ruling.

Espinosa said he got little sleep overnight in anticipation of a possible decision Thursday. In the minutes since the decision was posted, he said his group was “flooded with calls with Dreamers, happy, with that hope that they’re going to at least be in this country for a while longer.”

From the Senate floor, the Democratic leader Chuck Schumer said of the DACA decision, “I cried tears of joy.”

“Wow,” he went on, choking up. “These kids, these families, I feel for them, and I think all of America does.

The program grew out of an impasse over a comprehensive immigration bill between Congress and the Obama administration in 2012. President Barack Obama decided to formally protect people from deportation while also allowing them to work legally in the U.S.

But Trump made tough talk on immigration a central part of his campaign and less than eight months after taking office, he announced in September 2017 that he would end DACA.

The Department of Homeland Security has continued to process two-year DACA renewals so that hundreds of thousands of DACA recipients have protections stretching beyond the election and even into 2022. No new applications have been accepted since 2017, and it probably would take a court order to change that, Yale-Loehr said.

“The short answer is no new applications will be accepted tomorrow. That will take time."

The Supreme Court fight over DACA played out in a kind of legal slow motion. The administration first wanted the justices to hear and decide the case by June 2018. The justices said no. The Justice Department returned to the court later in 2018, but the justices did nothing for more than seven months before agreeing a year ago to hear arguments. Those took place in November and more than seven months elapsed before the court’s decision.