What Does it Mean to be a White Ally? 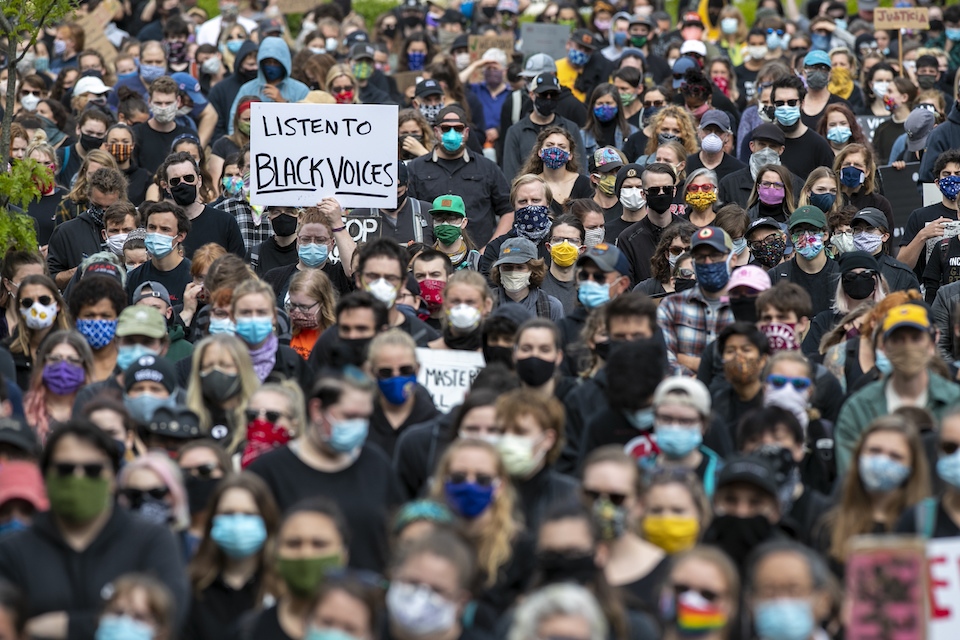 NEW YORK (AP) — In one video clip, a black man kneels in front of a line of police, then one by one young white men move in as shields, human barriers between him and the law.

In another, a black woman yells at two white women spray-painting a Starbucks shop with “BLM,” — Black Lives Matter — telling them to stop, that vandalism isn’t helping.

Variations of both scenes have played out around the country many times in the more than two weeks of protests following the killing of George Floyd by police. They raise the issue: For white people wanting to be part of an anti-racist movement, what does it mean to be an ally?

As a new generation steps up, activists and historians believe there’s important work to be done for white people: Listening to black voices and following rather than trying to lead, for one, and undertaking the deep introspection required to confront unconscious bias and the perks of privilege that come just from being white.

White people have played necessary roles in racial justice movements through time, from abolition to the civil rights era of the 1950s and ’60s, said Mark Warren, a professor of public policy and public affairs at the University of Massachusetts in Boston.

But “unfortunately, most white people still don’t have any extensive or real experience in multiracial organizations and settings that are led by black people in their lives,” he said. “So now they want to show up as allies, which is terrific, but are coming into that situation with not a lot of experience about how to act.”

Much has been made of the multiracial crowds that have surged into the streets around the country and the globe after video surfaced of the handcuffed Floyd face-down on a Minneapolis street under the knee of a white police officer, along with the recent deaths of Ahmaud Arbery in Brunswick, Georgia, and Breonna Taylor in Louisville, Kentucky.

While the diverse crowds have made for good television, some activists are skeptical that the show of support will produce long-term commitment among many white people, and they question whether surface-level activism and how it plays out on social media does more harm than good.

Ernest Owens, a 28-year-old black journalist, questions the concept of whites as “allies.”

While many have good intentions, he said true allyship — supporting black businesses, deeply exploring personal bias and ferreting out ways that white privilege contributes to persistent racism — must happen in order to genuinely stand in solidarity with the marginalized and oppressed.

“I really don’t think allies and the self grandeur is useful for conversations around racial change,” he said.

Tanya DePass, 47, the black founder of an organization that promotes diversity in the video gaming industry, posted a Twitter thread with tips for white people looking to help that was retweeted more than 19,000 times. Among them: “Educate yourself before you engage.”

DePass pointed to something other African Americans have noted amid the recent unrest: White acquaintances suddenly popping up, ostensibly to check on them, then engaging in conversations about how bad “they" feel.

That, DePass said, puts the onus on her to deal with their emotions.

“Stop making it into a white guilt thing,” the Chicago resident told The Associated Press. “I’ve gotten a lot of messages of ‘I’m so sorry, I know you’re scared,’ and this is from people I haven’t talked to in a few years. And it’s like what is driving this sudden reach out? ... I feel like they’re a step away from saying, ‘I’m sorry I’m white.’"

She added: “Stop apologizing for being white. That doesn’t do anything except re-center us back on having to convince, ‘No, no, no, you’re an OK white person.‘”

Carla Wallace, who is white, doesn’t like the term “ally.” She’s a co-founder in Louisville, Kentucky, of Showing Up for Racial Justice, an activist organization focused on mobilizing whites to work for an end to racism and white supremacy.

She’s been doing the work for a decade. Since protests began after Floyd’s death, she has heard from thousands more white people looking to get involved.

“In this moment, white silence is the greatest impediment to those in power making the changes that are needed,” Wallace said. “I don’t use the word 'ally' because that tends to create a situation where I’m helping someone else."

It's not her help that's needed, she said.

“It’s about me joining whatever power I have with the power that black and brown people have. It’s about, what is our mutual interest in working for a different society? ... We must move from it being something that we do when we have time on a Saturday to something that we do because our lives depend on it."

For 37-year-old Amanda Alappat in New York, her journey to rooting out bias within herself started two years ago when she was scrolling through Instagram and ran across the 28-day Me and White Supremacy Challenge aimed at fostering a better understanding of privilege.

“I married a brown man. I have a mixed-race child. I have black friends. I don’t feel racist, so I thought I was excused,” said Alappat, who is white and married to an Indian man. “I functioned 35 years of my life without even a glimpse into my own privilege. I benefited. I was complicit.”

Alappat now seeks out black businesses to support and plans to give a portion of her earnings as a yoga instructor to a black cause.

“We can’t proclaim ourselves as allies,” Alappat said. “It’s really up to black people to decide, `Yes Amanda is an ally. I see her as that.'”

The outpouring of protests in recent weeks on just about every continent are evidence that systemic racism and inequality does not begin and end at the U.S. borders.

Holiday Phillips, a sociologist in London, recalls the days after Arbery’s Feb. 23 shooting death and how the arrests of a white father and son more than two months later were heralded as a win for the power of social media after video of the attack on the black man surfaced.

“Looking through my feed, I wanted to say to my white friends, `You’re here now, but where are you the other 364 days a year when anti-racism isn’t trending? When racism isn’t tucked safely behind the screen in your hand, but right there in front of your face?’” she wrote on Medium, a popular blogging site.

True commitment means calling out your boss when he routinely mixes up your two Indian colleagues, or taking on a racist relative, Phillips said. It also means acting with your wallet, asking friends about their experiences of racism and sincerely listening.

“You can’t just say stuff," she said, "and tick your activist box.”