'Chaos in Georgia': Is Messy Primary a November Harbinger? 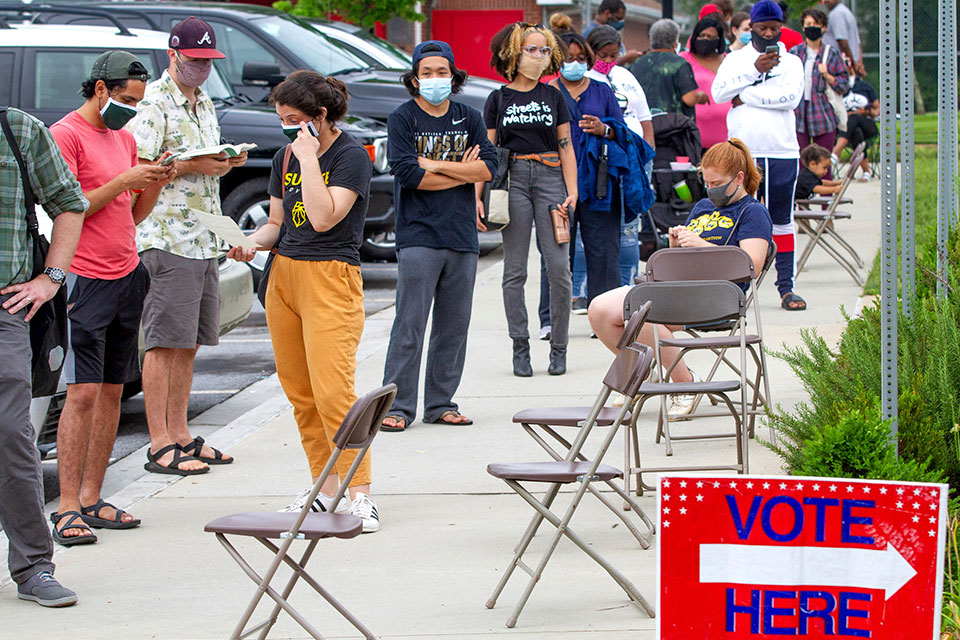 ATLANTA (AP) — The long-standing wrangle over voting rights and election security came to a head in Georgia, where a messy primary and partisan finger-pointing offered an unsettling preview of a November contest when battleground states could face potentially record turnout.

It raised the specter of a worst-case November scenario: a decisive state, like Florida and its “hanging chads” and “butterfly ballots” in 2000, remaining in dispute long after polls close. Meanwhile, Trump, Biden and their supporters could offer competing claims of victory or question the election’s legitimacy, inflaming an already boiling electorate.

Adia Josephson, a 38-year-old Black voter in the Brookhaven area just outside Atlanta, waited more than two hours to vote but wasn't about to let the long lines stop her. Problems with voting machines and long lines must be corrected before the next election, she said. “There’s no room for error," she said. "There’s a lot to gain and a lot to lose.” 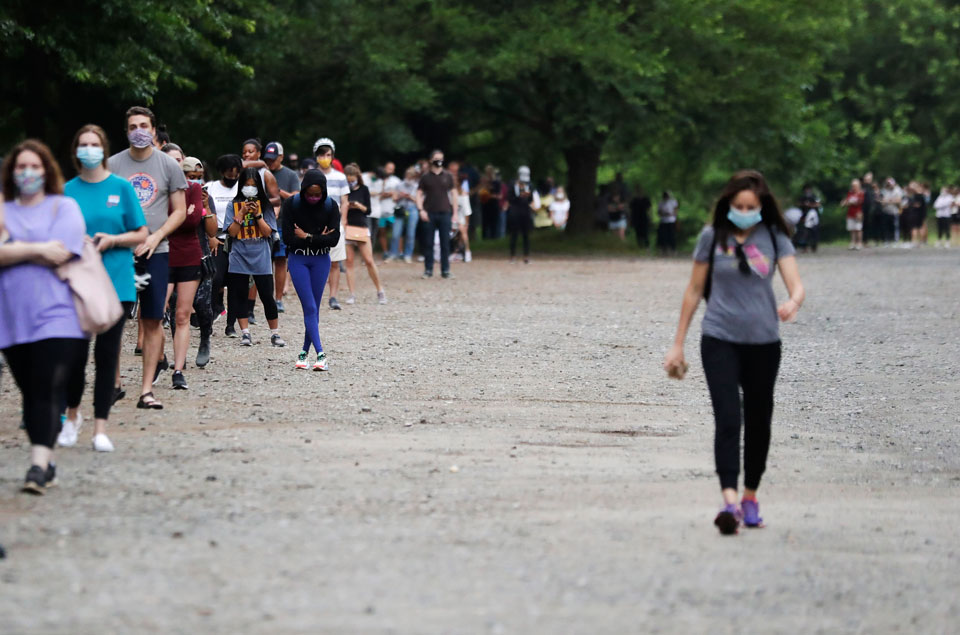 Rachana Desai Martin, a Biden campaign attorney, called the scenes in Georgia a “threat” to democracy. “We only have a few months left until voters around the nation head to the polls again, and efforts should begin immediately to ensure that every Georgian — and every American — is able to safely exercise their right to vote,” she said.

Atlanta Mayor Keisha Lance Bottoms tweeted at Raffensperger about problems in pockets of metro Atlanta. “Is this happening across the county or just on the south end,” the Democrat asked, referring to an area with a heavily Black population.

Stacey Abrams, the 2018 Democratic nominee for governor and an Atlanta resident, said “the blame rests solely and squarely on the shoulders of the secretary of state.” Abrams established herself as a voting rights advocate after she refused to concede her 2018 race because of voting irregularities when her Republican opponent, now-Gov. Brian Kemp, was secretary of state.

“Georgia has seen this before,” Abrams told “CBS This Morning” on Wednesday. “Yesterday was the most egregious example.” 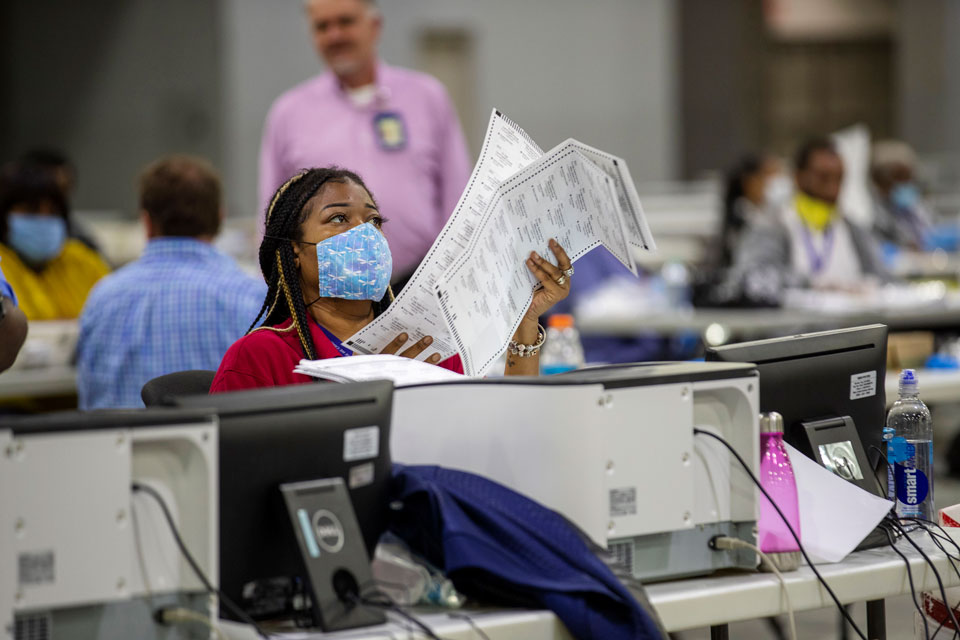 Fulton County employee Shaye Moss scans mail-in paper ballots at the Georgia World Congress Center during the Georgia primary elections in Atlanta on Tuesday, June 9, 2020. (Alyssa Pointer/Atlanta Journal-Constitution via AP)“Trump is already trying to extend this culture war by creating fear around vote-by-mail,” said Aneesa McMillan of the Priorities political action committee. She noted the Republican National Committee’s plans to recruit thousands of poll watchers now that the GOP is no longer under a court order banning the practice that Democrats equate to voter intimidation.

“We have to learn our lessons, not just from Georgia, and protect the entire process,” McMillan said.

“It’s really specifically in one or two counties, in Fulton and DeKalb counties, that had these issues today,” Raffensperger said. “It has nothing to do with what we’re doing in the rest of Georgia.”

Raffensperger, minimizing problems that were documented in other counties, promised investigations of Fulton's and DeKalb's handling of the primary. The Republican speaker of Georgia’s state legislature, meanwhile, called for an investigation of the entire primary process, singling out Fulton County as “particularly” troubling.

That kind of back-and-forth, with White Republicans and Black Democrats from big cities trading barbs over voting issues, isn’t new. And it’s one that could easily repeat in November in battleground states where Democrats and minorities figure prominently in the most populous cities and counties: Broward County (Fort Lauderdale), Florida; Wayne County (Detroit), Michigan; Charlotte, North Carolina; Philadelphia; Milwaukee.

Fulton County, which includes most of Atlanta, has a history of slow vote tabulation. Its local elections chief, Richard Barron, called Tuesday a “learning experience" while alluding to the state's role in the primary process.

Republican Secretary of State decides which counties get machines

The finger-pointing goes beyond details of the law. Raffensperger correctly noted that county officials train poll workers, including on the use of the new voting machines. But Raffensperger is the state’s chief elections official who decides how many machines to send to each county, and his office provides training curriculum for local officials.

On absentee ballots, he pushed unprecedented no-fault absentee access, paying to send an application to every Georgian on the active voter rolls. But no additional money was provided to hire staff to process the influx, which dwarfed the typical primary.

History suggests that both local and state officials, whether in Georgia or elsewhere, could find themselves in the national crosshairs if their election tallies leave the presidency in flux.

“I know that in these hyperpartisan times, half the people will be happy, and the other half will be sad,” Raffensperger said. “But we want to make sure that 100% of people know ... the election was done fairly and we got the accurate count.”

Associated Press writers Christina A. Cassidy and Jeff Martin in Atlanta contributed to this report.