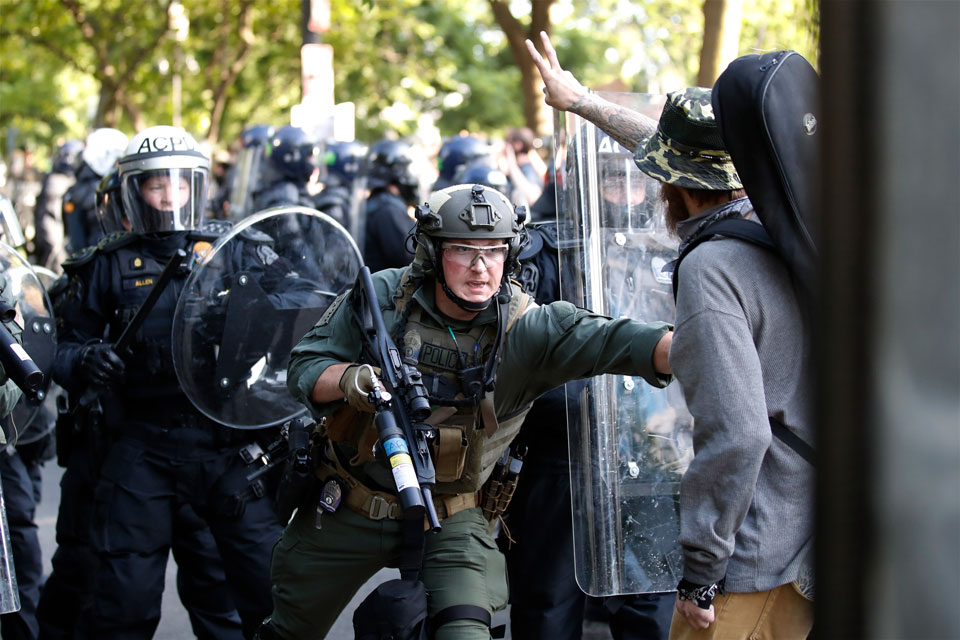 Protesters who were attacked with tear gas and other weapons by federal troops in front of the White House Monday evening as they were demonstrating against police brutality sued President Donald Trump, Attorney General William Barr, and numerous other federal officials yesterday for violating their constitutional rights and engaging in an unlawful conspiracy to violate those rights.

“What happened to our members Monday evening, here in the nation’s capital, was an affront to all our rights,” said April Goggans, core organizer of Black Lives Matter D.C., the lead plaintiff in the case. “The death of George Floyd and Breonna Taylor at the hands of police officers has reignited the rage, pain, and deep sadness our community has suffered for generations. We won’t be silenced by tear gas and rubber bullets. Now is our time to be heard.”

Hundreds of protesters were gathered Monday evening in Lafayette Square, the park in front of the White House, to protest police brutality. Immediately preceding the president’s appearance in the Rose Garden at approximately 6:30 p.m., U.S. Park Police conducted a coordinated and unprovoked charge into the crowd of demonstrators and deployed several rounds of chemical irritants, rubber bullets, and sound cannons to disperse the crowds away from the park. Following his brief statement, President Trump and administration officials walked to St. John’s Episcopal Church across the street from the White House to pose for pictures in front of the church holding a Bible.

“The president’s shameless, unconstitutional, unprovoked, and frankly criminal attack on protesters because he disagreed with their views shakes the foundation of our nation’s constitutional order,” said Scott Michelman, legal director, ACLU of the District of Columbia. “And when the nation’s top law enforcement officer becomes complicit in the tactics of an autocrat, it chills protected speech for all of us.”

Attacks by law enforcement against lawful demonstrators have escalated in recent days nationwide. Police drove vans into groups of protesters; pepper-sprayed them; fired rubber bullets at them; beaten them; and dragged them across streets. Police have also arrested thousands of protesters.

“Across the country, law enforcement armed with military weaponry are responding with violence to people who are protesting police brutality,” said Ben Wizner, director of the ACLU’s Speech, Privacy, and Technology Project.

“The First Amendment right to protest is under attack, and we will not let this go unanswered.

The lawsuit was filed in U.S. District Court for the District of Columbia and seeks an order declaring President Trump, Attorney General Barr, and other administration officials violated the protesters’ First and Fourth Amendment rights, as well as engaged in a conspiracy to deny those rights. The lawsuit seeks an order barring the officials from repeating the unlawful activities, and damages for the injuries plaintiffs sustained.

Below are additional comments from:

Jonathan M. Smith, executive director, Washington Lawyers’ Committee for Civil Rights and Urban Affairs: “The deaths at the hands of police of George Floyd, Breonna Taylor and other people of color have brought people to the streets across the nation to call for change. At this moment, the White House is a uniquely important venue for protest and demonstration. The actions in Lafayette park were a shocking assault on the First Amendment rights of people peaceably assembled to call upon their government for action.”

Kristen Clarke, president and executive director of the Lawyers’ Committee for Civil Rights Under Law: “For the President to refer to this assault as domination is very telling and indicates a willingness to use brute force to trample on the rights of Americans. The Lafayette Square assault amounts to unconstitutional and unlawful state-sponsored violence perpetrated against nonviolent civil rights activists. The actions of the government caused harm and were intended to chill the speech and right to assembly of people exercising constitutionally protected rights. This lawsuit is about defending rights that lie at the heart of our democracy.”

The complaint is here: https://www.aclu.org/legal-document/black-lives-matter-dc-v-trump.