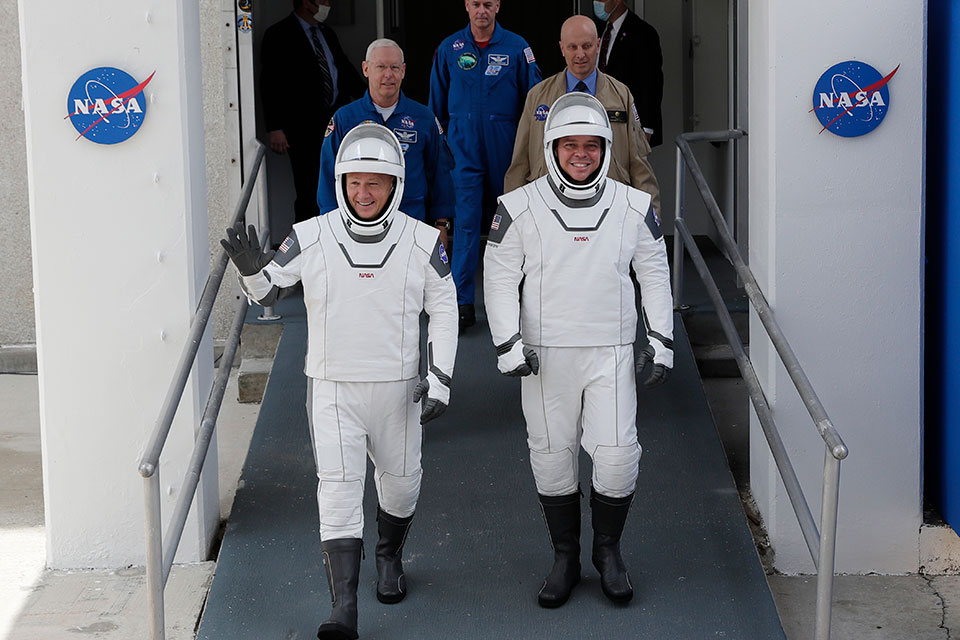 UPDATE: Mission was "scrubbed" less than 16 minutes from launch time. The mission is rescheduled for Saturday, June 2.

CAPE CANAVERAL, Fla. (AP) — With thunderstorms threatening a delay, two NASA astronauts climbed aboard a SpaceX rocket ship Wednesday for liftoff on a history-making flight that was seen as a giant leap forward for the booming business of commercial space travel.

Space veterans Doug Hurley and Bob Behnken were scheduled to ride into orbit aboard the brand-new Dragon capsule on top of a Falcon 9 rocket, taking off for the International Space Station at 4:33 p.m. EDT from the same launch pad used by the Apollo moon missions a half-century ago.

Smiling, waving and giving the traditional thumbs-up as Vice President Mike Pence looked on, the two men said farewell to their families — exchanging blown kisses and pantomiming hugs for their young sons from a coronavirus-safe distance — before setting out for the pad in a gull-wing Tesla SUV, another product from SpaceX’s visionary founder, Elon Musk.

Thunder could be heard rumbling as the convoy of vehicles made its way toward the rocket. And a tornado warning was issued moments after the astronauts climbed into their capsule.

The flight would mark the first time a private company sent humans into orbit.

It would also be the first time in nearly a decade that the United States launched astronauts into orbit from U.S. soil. Ever since the space shuttle was retired in 2011, NASA has relied on Russian spaceships launched from Kazakhstan to take U.S. astronauts to and from the space station. 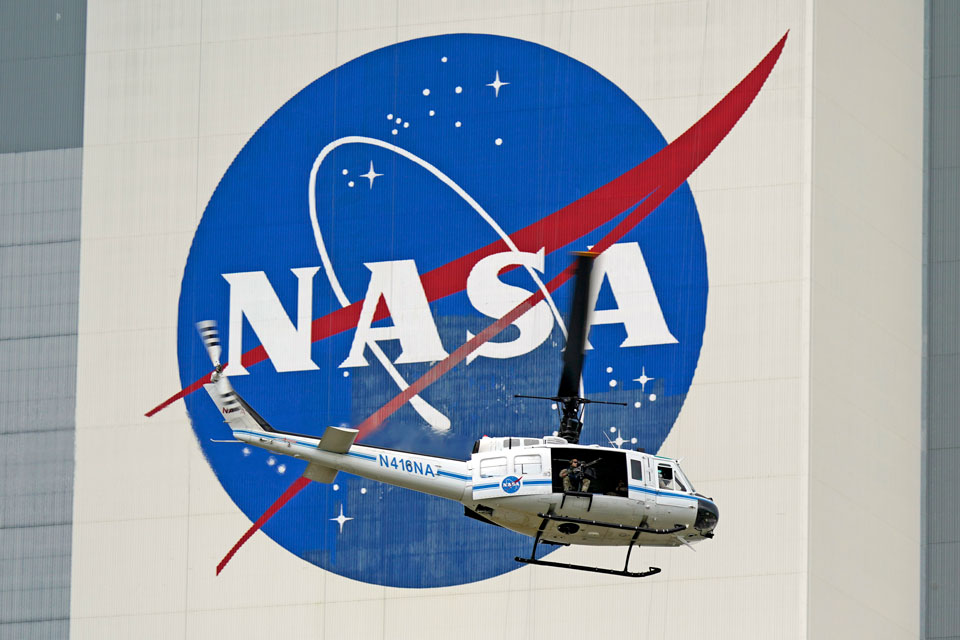 A NASA helicopter escorts the crew to Launch Pad 39-A, Wednesday, May 27, 2020, at Kennedy Space Center in Cape Canaveral, Fla. Two astronauts will fly on the SpaceX Demo-2 mission to the International Space Station scheduled for launch Wednesday. (AP Photo/David J. Phillip)With 2 1/2 hours to go before liftoff, controllers put the chances of launch at just 40 percent because of thunderstorms at NASA's Kennedy Space Center. In the event of a postponement, the next launch opportunity would be Saturday.

The preparations took place in the shadow of the coronavirus outbreak that has killed an estimated 100,000 Americans.

“We're launching American astronauts on American rockets from American soil. We haven't done this really since 2011, so this is a unique moment in time,” NASA Administrator Jim Bridenstine said.

With this launch, he said, “everybody can look up and say, 'Look, the future is so much brighter than the present.'

"And I really hope that this is an inspiration to the world.”

Musk, wearing a mask and keeping his distance, chatted with the two NASA astronauts just before they left for the launch pad. The mission would put Musk and SpaceX in the same league as only three countries — Russia, the U.S. and China, which sent astronauts into orbit in that order.

“What today is about is reigniting the dream of space and getting people fired up about the future,” he said in a NASA interview.

A solemn-sounding Musk said he felt his responsibilities most strongly when he saw the astronauts’ wives and sons just before launch. He said he told them: “We’ve done everything we can to make sure your dads come back OK.”

NASA pushed ahead with the launch despite the viral outbreak but kept the guest list at Kennedy extremely limited and asked spectators to stay at home. Still, beaches and parks along Florida's Space Coast are open again, and hours before the launch, cars and RVs already were lining the causeway in Cape Canaveral. 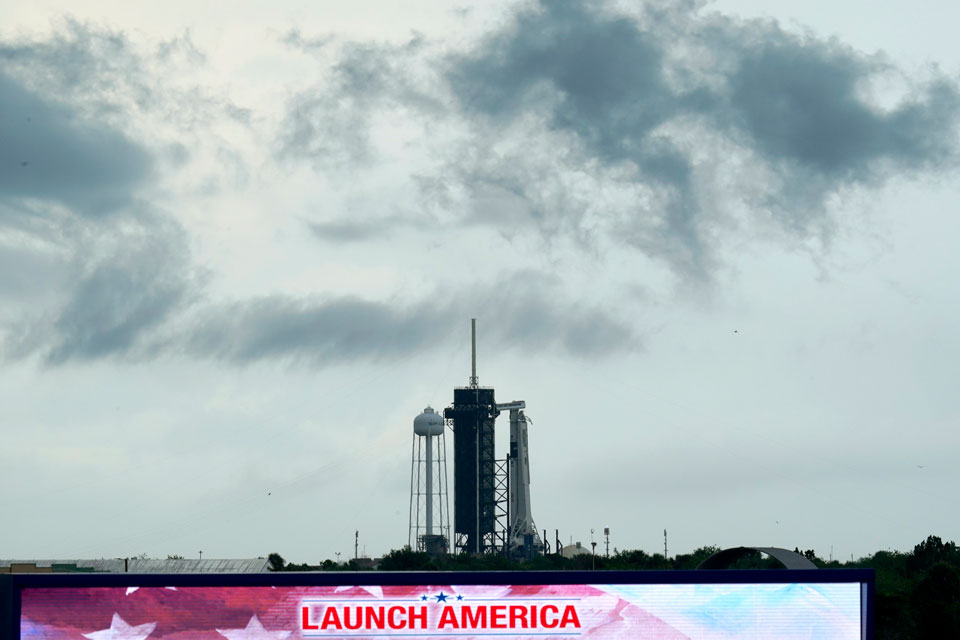 Clouds pass over the SpaceX Falcon 9, with the Crew Dragon spacecraft on top of the rocket, as it sits on Launch Pad 39-A Wednesday, May 27, 2020, at Kennedy Space Center in Cape Canaveral, Fla. Two astronauts will fly on the SpaceX Demo-2 mission to the International Space Station scheduled for launch Wednesday. (AP Photo/David J. Phillip)The space agency also estimated 1 million people were watching the launch preparations online during the afternoon.

President Donald Trump also planned to fly in for the liftoff.

Among the sightseers was Erin Gatz, who came prepared for both rain and pandemic. Accompanied by her 14-year-old daughter and 12-year-old son, she brought face masks and a small tent to protect against the elements.

She said the children had faint memories of watching in person one of the last shuttle launches almost a decade ago when they were preschoolers.

“I wanted them to see the flip side and get to see the next era of space travel,” said Gatz, who lives in Deltona, Florida. “It’s exciting and hopeful.”

NASA hired SpaceX and Boeing in 2014 to transport astronauts to the space station in a new kind of public-private partnership. Development of SpaceX’s Dragon and Boeing’s Starliner capsules took longer than expected, however. Boeing's craft is not expected to fly astronauts into space until early 2021.

“We’re doing it differently than we’ve ever done it before," Bridenstine said. "We’re transforming how we do spaceflight in the future.”

The Associated Press Health and Science Department receives support from the Howard Hughes Medical Institute’s Department of Science Education. The AP is solely responsible for all content.