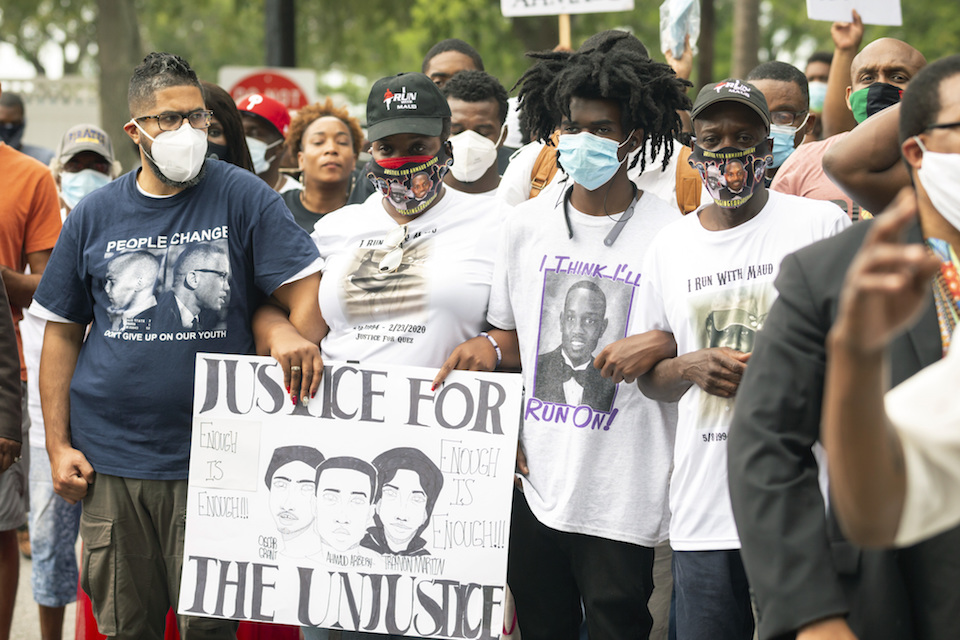 BRUNSWICK, Ga. (AP) — Justice for Ahmaud Arbery, a black man killed during a pursuit by a white man and his son in Georgia, isn't just prison time for his killers — it's changes in a local justice system that never charged them with a crime, rallygoers said Saturday.

Hundreds of people came to the Glynn County courthouse demanding accountability for a case in which charges weren't filed until state officials stepped in after a leaked video sparked national outrage.

Arbery, 25, was killed Feb. 23 just outside the port city of Brunswick. Gregory McMichael, 64, told police he and his son, Travis McMichael, 34, pursued Arbery because they believed he was responsible for recent break-ins in the neighborhood.

The McMichaels weren't arrested and charged with murder until May 7, after a video of the shooting was publicly released to a local radio station and less than 48 hours after state agents took over the case.

“Justice for Ahmaud is more than just the arrests of his killers,” said John Perry, president of the Brunswick NAACP chapter at the Saturday rally. “Justice is saying that we’ve got to clean up the house of Glynn County.”

Speakers at the rally demanded the resignation of Jackie Johnson, the district attorney for the Brunswick Judicial Circuit who recused herself from the investigation, and George Barnhill, the Waycross circuit district attorney who took over the case and declined to press charges.

Gregory McMichael was an investigator in Johnson’s office before retiring last May. Both Johnson and Barnhill have denied wrongdoing.

Organizers of the rally said around 250 vehicles drove more than four hours from Atlanta for the rally, bringing historically black fraternities and sororities, civil rights organizations and black-led gun rights groups, who said if Arbery had armed himself, he might be alive today.

Reminders of others killed

Attorney Mawuli Davis came from his suburban Atlanta home because he wanted to make it clear how many people are not satisfied with how the Arbery case has been handled.

“Georgians are just not safe when you allow an injustice like this to take place,” said Davis, who is an organizer with the Black Man Lab in Decatur, Georgia.

The case has brought reminders of several other black people killed in confrontations with white police officers or others and the names of Trayvon Martin, Sandra Bland and others were mentioned during the rally.

Risk of COVID-19 at rally

Organizers asked the crowd to wear masks and stay a safe distance apart because of COVID-19. There were plenty of masks — some with Arbery's picture — but many in the crowd were shoulder to shoulder for the rally and marched with arms locked after it was over.

Arbery family attorneys have said he’s the person recorded inside a house under construction right before he was killed. Gregory McMichael told police he suspected Arbery was responsible for recent break-ins and he also said Arbery attacked his son before he was shot.

Arbery’s mother has said she believes her son was merely out jogging. The video of the confrontation shows the McMichaels' truck in front of Arbery as he runs toward it.

Getting water from empty site

The attorney of the owner of the house under construction said she thinks Arbery was getting water. A man in similar clothes appeared in videos from the home at least twice, lawyer J. Elizabeth Graddy said.

The homeowner, Larry English, lives hours away and set up motion-activated security cameras that send him a text when they start filming.

English called the Glynn County Police after one notification Dec. 17.

No one was arrested, but a detective sent English a text message three days later giving him Gregory McMichael's phone number and identifying him as a retired law enforcement officer, adding “he said please call him day or night when you get action on your camera,” according to the Dec. 20 text shared by Graddy.

“He never called Gregory McMichael. He never took him up on that offer,” Graddy said.

The text message was first reported by The Atlanta Journal-Constitution.

Arbery's family ended Saturday's rally thanking the crowd for their support and saying "we are all running for Ahmaud.”

The crowd then marched away from the courthouse, taking a knee in silence and blocking traffic for more than 60 seconds to symbolize the days it took for arrests in the case.

Then they chanted: “When black lives are under attack, what do we do? Stand up, fight back."

Jeffrey Collins in Columbia, South Carolina, contributed to this report. Morrison is a member of The Associated Press' Race and Ethnicity team. Follow him on Twitter at https://twitter.com/aaronlmorrison.