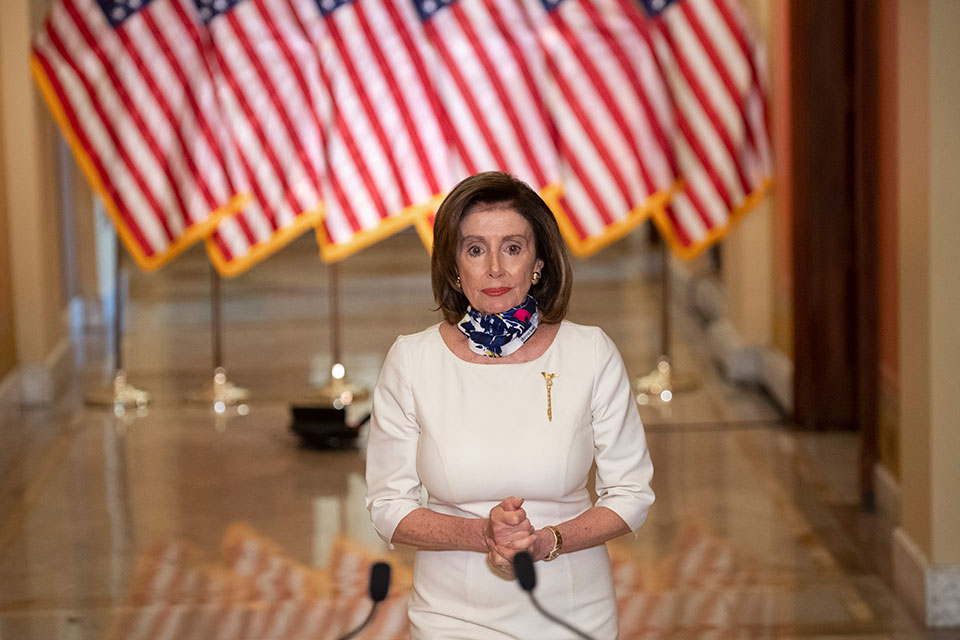 WASHINGTON (AP) — House Speaker Nancy Pelosi unveiled a more than $3 trillion coronavirus aid package Tuesday, a sweeping effort with $1 trillion for states and cities, “hazard pay” for essential workers and a new round of cash payments to individuals.

The House is expected to vote on the package as soon as Friday. But Senate Majority Leader Mitch McConnell has said there is no “urgency.” The Senate will wait until after Memorial Day to consider options.

“We must think big, for the people, now," Pelosi said from the speaker's office at the Capitol.

“Not acting is the most expensive course," she said. 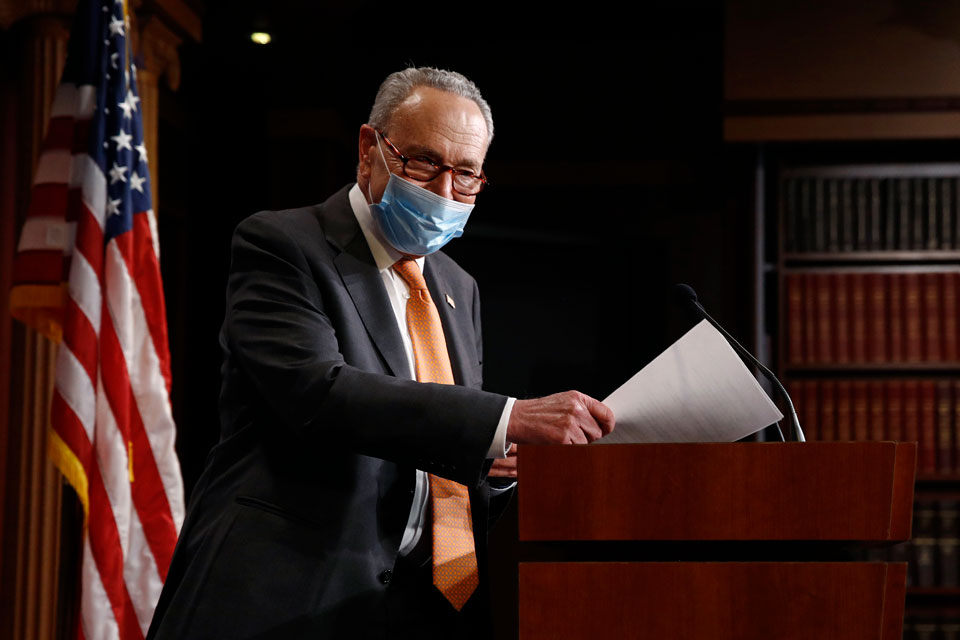 Senate Minority Leader Sen. Chuck Schumer of N.Y., center, arrives for a news conference on Capitol Hill in Washington, Tuesday, May 12, 2020. (AP Photo/Patrick Semansky)Lines drawn, the latest pandemic response from Congress will test the House and Senate — and President Donald Trump — as Washington navigates the extraordinary crisis with the nation's health and economic security at stake.

The Democrats' Heroes Act is built around nearly $1 trillion for states, cities and tribal governments to avert layoffs, focused chiefly on $375 billion for smaller suburban and rural municipalities largely left out of earlier bills.

The bill will offer a fresh round of $1,200 direct cash aid to individuals, increased to up to $6,000 per household, and launches a $175 billion housing assistance fund to help pay rents and mortgages. There is $75 billion more for virus testing.

It would continue, through January, the $600-per-week boost to unemployment benefits. It adds a 15% increase for food stamps and new help for paying employer-backed health coverage. For businesses, it provides an employee retention tax credit.

There’s $200 billion in “hazard pay” for essential workers on the front lines of the crisis.

Pelosi drew on U.S. history — and poetry — to suggest “no man is an island” as she called on Americans to respond to the crisis with a strategy of science, virus testing and empathy.

“There are those who said, ‘Let’s just pause,’” she said.

But the 1,800-page package is heading straight into a Senate roadblock. 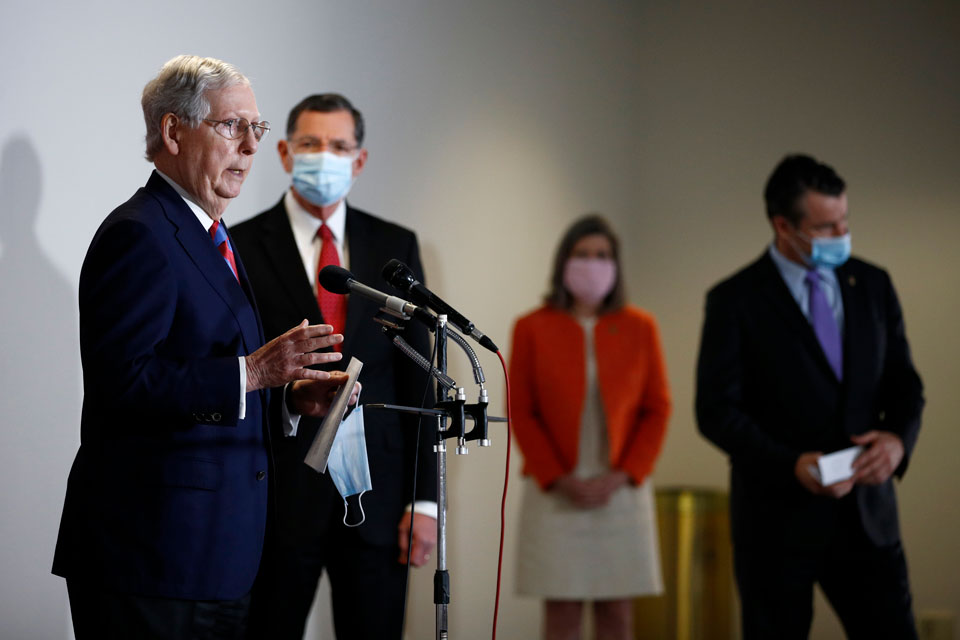 Senate Majority Leader Mitch McConnell of Ky., left, speaks at a news conference on Capitol Hill in Washington, Tuesday, May 12, 2020. Standing behind McConnell are Sen. John Barrasso, R-Wyo., from back left, Sen. Joni Ernst, R-Iowa, and Sen. Todd Young, R-Ind. (AP Photo/Patrick Semansky)Republicans are wary of another round of aid and McConnell declared the Democratic proposal a grab bag of “pet priorities.” He said Tuesday it is not something that “deals with reality.”

House Republicans also took a pass. "I can’t believe that that would be real,” said Rep. Andy Biggs, R-Ariz., leader of the hard-right House Freedom Caucus, said in an interview.

This would be the fifth coronavirus package. It's a starkly partisan offering with no real input from Republicans, who prefer to assess the impact of earlier expenditures before approving more.

But the political peril of doing nothing during an election year could prove challenging for Congress and the White House. As states experience flareups of virus outbreaks, and more than 30 million Americans remain unemployed in the shutdown, the near-term health and economic outlook remains daunting.

The Senate Democratic leader, Chuck Schumer of New York, warned that Trump and Republicans risk the same path as Herbert Hoover, the former president roundly criticized for failing to act to stem the Great Depression.

“What is it going to take for Mitch McConnell to wake up and see the American people need help, and they need it now?" Schumer said.

Adds to previous aid and adds new ones

The latest package extends some provisions from previous aid packages, and adds new ones.

There is $25 billion for the U.S. Postal Service. There is help for the 2020 Census. For the November election, the bill provides $3.6 billion to help local officials prepare for the challenges of voting during the pandemic.

The popular Payroll Protection Program, which has been boosted in past bills, would see another $10 billion to ensure under-served businesses and nonprofit organizations have access to grants through a disaster loan program.

For hospitals and other health care providers, there’s another $100 billion infusion to help cover costs and additional help for hospitals serving low-income communities.

There’s another $600 million in funding to tackle the issue of rapid spread of the virus in state and federal prisons, along with $600 million in help to local police departments for salaries and equipment

McConnell said he is working with the White House on next steps. His priority is to ensure any new package includes liability protections for health care providers and businesses that are reopening. Trump is expected to meet Tuesday with a group of Senate Republicans.

“I don’t think we have yet felt the urgency of acting immediately,” McConnell told reporters earlier this week at the Capitol.

As states weigh the health risks of re-opening, McConnell said Tuesday the nation needs to find a "middle ground between total lockdown and total normalcy.”

The Senate recently reopened its side of the Capitol while the House remains largely shuttered due to the health concerns.

Senators have been in session since last week, voting on Trump's nominees for judicial and executive branch positions and other issues. The Senate majority, the 53-member Senate Republican conference, is meeting for its regular luncheons most days, spread out three to a table for social distance. Democrats are convening by phone. Many senators, but not all, are wearing masks.

At least a dozen Capitol police officers and other staff have tested positive for the virus, and at least one senator, Lamar Alexander of Tennessee, is in isolation at home after exposure from a staff member who tested positive. Other lawmakers have cycled in and out of quarantine.

Associated Press writers Alan Fram and Matthew Daly in Washington, and Nick Riccardi in Denver, Colo., contributed to this report.