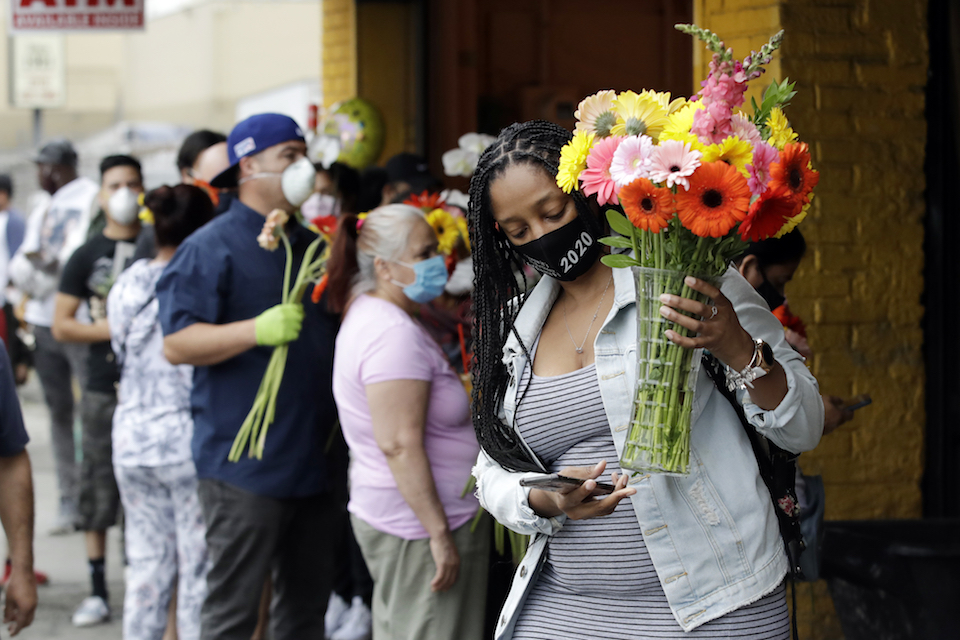 HOUSTON (AP) — Families in the U.S. and elsewhere marked an unusual Mother's Day Sunday—with social distancing and isolation due to the coronavirus pandemic.

At the same time world leaders are balancing optimism they could loosen lockdowns that have left millions unemployed against the threat of a second wave of infections.

Yet despite the pressure to lift lockdown restrictions, the health crisis is far from over. Three members of the White House coronavirus task force, including Dr. Anthony Fauci, have placed themselves in quarantine after coming in contact with someone who tested positive.

Treasury Secretary Steven Mnuchin predicted the American economy would rebound in the second half of this year from unemployment rates that rival the Great Depression.

Another 3.2 million U.S. workers applied for jobless benefits last week, bringing the total over the last seven weeks to 33.5 million.

"I think you're going to see a bounce-back from a low standpoint," said Mnuchin, speaking on "Fox News Sunday."

But the director of the University of Washington institute that created a White House-endorsed coronavirus model said states' moves to re-open businesses "will translate into more cases and deaths in 10 days from now."

Dr. Christopher Murray of the Institute for Health Metrics and Evaluation said states where cases and deaths are going up more than expected include Illinois, Arizona, Florida and California.

England sends some back to work

U.K. Prime Minister Boris Johnson announced a modest easing of England's coronavirus lockdown, saying those in the construction or manufacturing industries or other jobs that can't be done at home "should be actively encouraged to go to work" this week.

However political leaders in the other UK nations—Northern Ireland, Scotland and Wales—say they won't lift their 'stay at home' order yet because the infection is still spreading too quickly.

Johnson, who has taken a tougher line after falling ill himself with what he called "this devilish illness," set a goal of June 1 to begin re-opening schools and shops if the U.K. can control new infections and the transmission rate of each infected person.

The country has recorded the most virus deaths in Europe at over 31,900.

"We will be driven not by mere hope or economic necessity," he said. "We're going to be driven by the science, the data, and public health."

He also said he would soon impose a quarantine for some air travelers entering the U.K., but gave no start date or other specifics.

Germany, which managed to push new infections below 1,000 daily before deciding to loosen restrictions, has seen regional spikes in cases linked to slaughterhouses and nursing homes.

German officials expressed concerns about the growing number of large demonstrations, including one in the southwestern city of Stuttgart that drew thousands.

Police in Berlin stepped in Saturday after hundreds of people failed to respect social distancing measures at anti-lockdown rallies.

South Korea also saw a new spike with 34 more cases of infections linked to nightclubs threatening its hard-won gains against the virus.

It was the first time that South Korea's daily infections were above 30 in about a month.

France, which has a similar number of infections as Germany but a far higher death toll at over 26,300, is letting some younger students go back to school Monday after almost two months out.

Attendance won't be compulsory right away, allowing parents to decide if it's safe or not.

Italian hotel owners, tour guides, beach resorts and others who depend heavily on tourism are pressing to know when citizens can travel across the country.

In a newspaper interview, Premier Giuseppe Conte promised that the restriction on inter-regional movement would be lifted, but only after authorities better determine how the virus outbreak evolves.

Residents in some Spanish regions will be able to enjoy limited seating at bars, restaurants and other public places Monday, but Madrid and Barcelona, the country's largest cities, will remain shut down.

Spain reported 143 new deaths from the virus, the lowest daily increase since March 19.

Russia, in contrast, is still reporting rising infections. Figures on Sunday recorded 11,012 new cases, the highest one-day tally yet, for a total of nearly 210,000 cases and 1,915 reported deaths.

Eleven of 12 domestic infections were in the northeastern province of Jilin, prompting authorities to raise the threat level in one of its counties, Shulan, to high risk, just days after downgrading all regions to low risk.

Authorities said the Shulan outbreak originated with a 45-year-old woman who had no recent travel or exposure history but spread it to her husband, three sisters and other relatives. Train services in the county were suspended.

Jilin also shares a border with North Korea, which insists it has no virus cases, much to the disbelief of international health authorities.

The U.S. has seen 1.3 million infections and nearly 80,000 deaths — the most in the world by far, according to a tally by Johns Hopkins University.

A nursing home in Miami held a Mother's Day parade on Saturday, with children and grandchildren driving past the windows and waving at loved ones inside.

Others grieved for those victims of the virus that has caused particular suffering for the elderly and previously sick.

Matilda Cuomo, the mother of New York Gov. Andrew Cuomo, called into her son's daily briefing so he and his three daughters could wish her a happy Mother's Day.

"I am so blessed as many mothers today are," she said.

Andrew Cuomo, whose state is the deadliest hot spot for the virus in the U.S., said he looked forward to getting back to normal.

"We're going to have fun, and then you can spend more time with me. I know I am your favorite," he said in a playful dig at his siblings.

Cuomo also announced two policy reversals a day after an Associated Press report in which residents' relatives, watchdog groups and politicians from both parties alleged he was not doing enough to counter the surge of deaths in nursing homes, where about 5,300 residents have died.

Nursing home staff in New York will now have to undergo COVID-19 tests twice a week and facilities will no longer be required to take in hospital patients who were infected.

Worldwide, 4 million people have been reported infected and more than 280,000 have died, over half of them in Europe, according to Johns Hopkins.