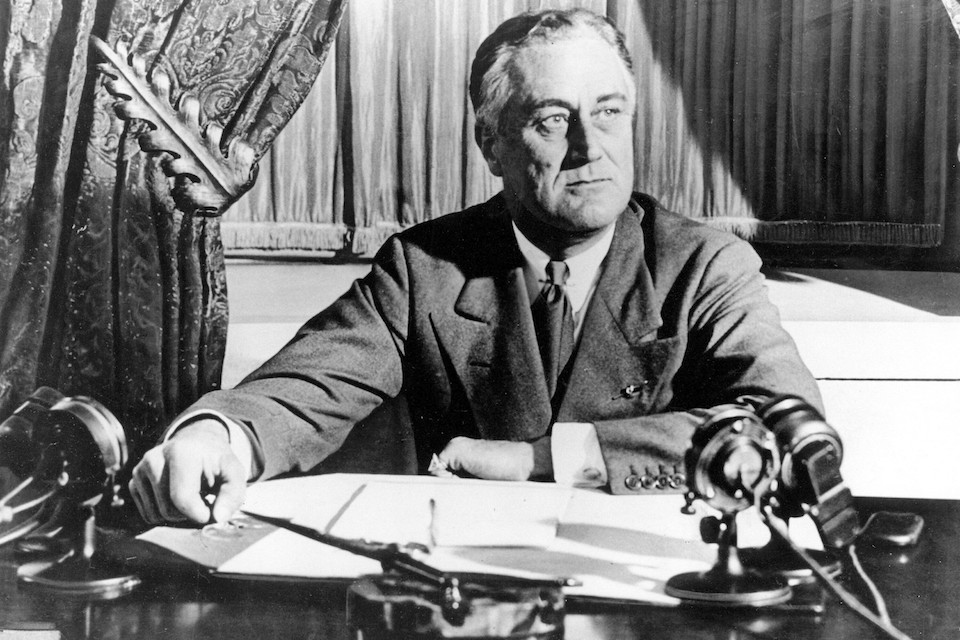 WASHINGTON (AP) — The New Deal was really a series of new deals, spread out over more than six years during the Great Depression — a menu of nationally scaled projects that were one part make-work and many parts lasting impact. They delivered a broad-shouldered expression of presidential authority whose overall benefits were both economic and psychological.

Not all of them worked. Some failed badly. But it was a try-anything moment by Franklin D. Roosevelt at a time of national despair. And it remade the role of the federal government in American life.

Men were hired to plant trees in Oklahoma after the Dust Bowl and to build roads, bridges and schools. Writers and artists were dispatched to chronicle the hardship, employing authors like Saul Bellow and Ralph Ellison. In most every state, you can still see murals or read local histories or walk into enduring projects like LaGuardia Airport and Dealey Plaza in Dallas.

In Oregon, the New Deal built Clackamas County Courthouse, the Bonneville Dam and Franklin High School as well as dozens of other projects.

These programs were designed to provide get-by wages in exchange for work. But others were crafted to remake society. Social Security was instituted to save the elderly from poverty, federal insurance on banks to renew trust in the financial system, minimum wage and labor rights to redistribute the balance of power between employer and employee.

Now, nearly 90 years later, the United States is fighting a disease that presents the country with wrenching life-and-death challenges. Yet at the same time, it has served up something else as well: a rare opportunity to galvanize Americans for change.

And as the U.S. confronts its most profound financial crisis since the Depression, brought on by the most deadly pandemic in a century, there are early soundings of a larger question: What would a “new” New Deal look like?

For the historian Doris Kearns Goodwin, whose latest book is “Leadership in Turbulent Times,” the very act of discussing such a possibility is productive in itself. “It at least allows you to think of something that could come out of this that could be positive."

Yet the coronavirus outbreak has also revealed how ill-equipped the government was to address the rapidly escalating fallout of 26 million job losses, overwhelmed hospitals and millions of shuttered businesses only weeks away from failure.

Among the questions at hand:

—How can Americans have greater access to savings for retirement and financial emergencies? There are fewer workers than a generation ago, and many face higher costs for housing and school.

—How can the government ensure greater resources for medical care in a crisis? This would mean that mission-critical workers, from nurses to grocery-store clerks, have stockpiles of equipment to stay safe. It would mean people could get tested and treated without crippling hospital bills. And it would mean researchers have incentives to develop vaccines and bring them to market faster.

President Donald Trump has talked up infrastructure programs and affordable healthcare but offered few details. Democratic lawmakers must work with a president their base of voters distrusts and despises. The likely consequence: Any mandate for change will come from the ballot boxes this November.

It is unlikely the Republican-controlled Senate would consider such legislation, but it also shows what Democrats might have in mind as voters contemplate upcoming elections.

Both parties have an uneasy relationship with how states and the federal government should share their power, and any reprise of the New Deal would likely enhance Washington’s authority.

Trump has yet to offer a systemic solution to the crisis. though he has approved record levels of direct assistance to businesses and individuals. Joe Biden, the presumptive Democratic nominee, has talked more about combating the pandemic than he has about reimagining what kind of country might emerge from it.

So far, Congress has committed more than $2 trillion to sustaining the economy during the outbreak. But most economists see that unprecedented sum as relief, not recovery or reform — just one of the “three Rs” of the New Deal.

Any recovery will rely on government programs to catalyze the economy so that hiring and commerce can flow again. The public will also expect reforms that make the nation more resilient against future emergencies, so people feel comfortable enough to take the risks that lead to innovation and prosperity.

Investing in infrastructure holds bipartisan appeal. Trump has repeatedly called for upgrades to roads, bridges and pipelines. Democrats would like to ensure that internet connectivity, including next-generation 5G, exists in rural and poorer communities.

But other options have existed mainly in the white papers of think tanks, academics and advocacy groups. There is a newfound appetite for them, which could overpower even the highly polarized politics of this moment.

“The question people always ask is, what would it take to break through that extreme partisanship?” Goodwin said. “It takes a crisis. This is what happens during wars.”

Can the country unite?

After 9/11, much of the criticism of the federal government focused on a collective “failure of imagination.”

Nineteen years later, that phrase has a new context as Washington tries to fashion a response to the coronavirus. It's a challenge at a scale the nation has not seen since 1932, when Roosevelt, a Democrat, defeated Republican President Herbert Hoover with a promise of better days ahead — a “new deal” for the “forgotten man.”

When New Deal programs were unveiled, no one definitively knew what had caused the U.S. economy to collapse, unlike now, when the culprit and the vulnerabilities are clearer.

The political climate was fundamentally different then. Roosevelt, celebrated for his optimism and empathy, had muscular Democratic majorities in Congress. But he also sought to unite the country.

His first radio “fireside chat” in 1933 was devoted to asking Americans to trust the banking system again. “He promised them that they could get their money back,” Goodwin said. The next fireside chat called for systemic change that Roosevelt argued would regulate capitalism's extremes and provide a safety net.

“Roosevelt was very concerned with the idea of one body politic,” said Allan Winkler, a professor emeritus at Miami University of Ohio, who testified before Congress about the New Deal in 2009 during the height of the financial crisis.

“I worry about that in the current situation, that we don’t have a willingness to work together.”

But the New Deal programs stemmed from bold visions that could be implemented by political leaders, he cautioned.

“In our fragmented body politic, it would take an extraordinary politician to do what is necessary."

This is why a debate is starting among policy thinkers about the components needed for recovery and reform: so that leaders can feel empowered to take action.

“We need another bill to jump start the economy,” Emanuel said. He says it should be followed by investments in infrastructure to improve online connectivity so that learning, medicine and work can get through stay-at-home orders.

The case for a major rebuilding may become clear if dire forecasts of a second-quarter decline in annual economic output ranging from 30% to 50% come true.

“I think we are going to see an epic lockup in the mortgage markets as people are going to be unable to make their payments,” said Louis Hyman, a historian at Cornell University.

This same cascade of defaults existed in the Great Depression. The New Deal swung to the rescue with the Home Owners’ Loan Corporation, which bought past-due mortgages with government bonds and blocked a wave of foreclosures. Government officials also developed what would become 30-year mortgages. The loan’s stable interest rates helped spur new construction.

But now, Hyman says, there's a “painful truth”: The bulk of most people’s wealth is tied up in their homes — and inaccessible in a crisis.

“The policy that would undo that is to enable people to accumulate wealth in other ways," he wrote in an email. Those include better pay, capital market investment incentives and, especially, "building lots of houses for the under-housed.”

No agreement in Congress

Any attempt at updating a New Deal will reflect ideological differences between Democrats and Republicans.

Framing this divide is a simple choice: Is it better to establish a government firewall that can protect the economy during future downturns? Or should the tax code and regulations be re-engineered so that private companies and individuals can more easily adapt to pandemics?

Heather Boushey, president of the Washington Center for Equitable Growth, says allowing government aid to automatically increase as the economy began to fall would have been one of “our best defenses so that the coronavirus recession does not turn into a full-scale economic depression."

“Responding to the crisis without also making our economy more resilient against future shocks would be a mistake,” she said. Automatic triggers for expanded jobless benefits, increased medical aid and new construction spending would ease the pain of a downturn and speed recovery.

More conservative economists believe adjustments to the tax code and regulations will improve growth and resilience.

“This is not one of those things where if you send checks you can jump-start the economy," said Douglas Holtz-Eakin, a former Congressional Budget Office director and economic adviser to Republicans.

Price Fishback, an economist at the University of Arizona known for his work studying the Depression era, proposes another, more abstract notion as a key to fashioning a New Deal for the 21st century: humility.

Even New Deal programs that improved lives did not insulate the American people. There was stagflation in the 1970s. Untamed financial markets fueled a housing bubble during the 2000s. And at the end of 2019, no major economist forecasting this year envisioned that a pandemic would throw the world into turmoil.

The United States would be stronger with improved internet connectivity, more housing, government programs that can cushion a downturn and a health care system that can handle crises and emergencies. Life would be better. But the nation would be far from impervious.

“Once we think we got it licked," he says, “we get slammed in the face again.”