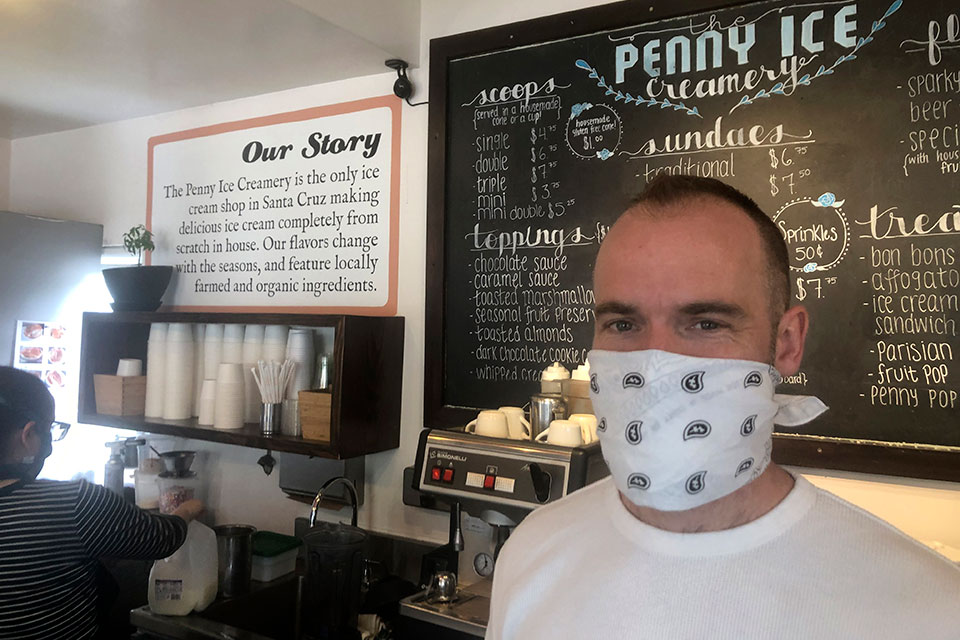 Companies with thousands of employees, past penalties from government investigations and risks of financial failure even before the coronavirus walloped the economy were among those receiving millions of dollars from a relief fund that Congress created to help small businesses through the crisis, an Associated Press investigation found.

The Paycheck Protection Program was supposed to infuse small businesses, which typically have less access to quick cash and credit, with $349 billion in emergency loans that could help keep workers on the job and bills paid on time.

But at least 94 companies that disclosed receiving aid since the program opened April 3 were publicly traded, the AP found, some with market values well over $100 million. And about 25% of the companies had warned investors months ago — while the economy was humming along — that their ability to remain viable was in question.

By combing through thousands of regulatory filings submitted through Monday, the AP identified the 94 companies, or their subsidiaries, as recipients of a combined $365 million in low-interest, taxpayer-backed loans.

Nine of the loans were for the maximum $10 million possible, including one to a California software company that settled a Securities and Exchange Commission investigation late last year into accounting errors that overstated its revenue.

The firms getting maximum loans are likely just a tip of the iceberg: Statistics released last week by the U.S. Small Business Administration showed that 4,400 of the approved loans exceeded $5 million. Overall, the size of the typical loan nationally was $206,000, according to the statistics. The SBA will forgive the loans if companies meet certain benchmarks, such as keeping employees on payroll for eight weeks.

The list of recipients identified by the AP is a fraction of the 1.6 million loans that lenders approved before the program was depleted last week, but it is the most complete public accounting to date. Neither the Trump administration nor the lending industry has disclosed a list of Paycheck Protection Program (PPP) beneficiaries.

According to Eater Portland, Gordon Sondland’s Provenance Hotels has received a PPP loan. Some of the company’s luxury brands include The Heathman Hotel, Dossier, and Hotel Lucia in Portland and Hotel Theodore, and Hotel Max in Seattle. Sondland was President Trump's EU Ambassador and played a key role in the impeachment hearings.

On Tuesday, the White House referred questions to the SBA and Treasury Department.

The SBA did not respond directly to AP's findings. Instead, the agency emailed a list of bullet points including that "loans cited by recent media reports going to large companies comprise less than 10% of the loans made."

Treasury Secretary Steven Mnuchin addressed the issue at Tuesday evening's White House briefing, saying, "The intent of this money was not for big public companies that had access to capital."

The department has said in written materials that 74% of the loans were for less than $150,000, demonstrating "the accessibility of this program to even the smallest of small businesses."

The AP analysis comes as lawmakers reached an additional relief package that would replenish the Paycheck Protection Program with more than $300 billion. The Senate approved the deal Tuesday and the House was scheduled to vote Thursday.

In the wrangling ahead of Tuesday's vote, several lawmakers expressed urgent need to get more money to Main Street.

"I am troubled by reports of publicly traded companies with access to capital & bank relationships receiving money quickly while many ma & pa shops can't even get a call back or $1," Sen. Martha McSally, R-Ariz., tweeted.

"The next round of funds must be focused on small businesses, with better oversight & transparency."

"If we let the applications for the largest entities consume those one and two-person operations, we have failed our constituents and paved the way for national economic decline," the leaders of the Congressional Asian Pacific American Caucus, the Congressional Black Caucus and the Congressional Hispanic Caucus said in a written statement.

In its review, AP also found examples of companies that had foreign owners and that were delisted from U.S. stock exchanges, or threatened with removal, because of their poor stock performance before the coronavirus hit. Other companies have had annual losses for years.

"We currently have no products on the market and expect that it may be many years, if ever, before we have a product candidate ready for commercialization," it wrote.

In an emailed statement, the company said: "The livelihood of our U.S. employees and their families would be severely disrupted if they were to lose their jobs or be furloughed. We are doing everything we can to support them."

Michael Minnis, who has studied the SBA program as an accounting professor at the University of Chicago Booth School of Business, said he understood the frustrations of smaller businesses that have not received funding when publicly listed companies have. But he said it would be hard to go into the program and change the parameters now.

"There's a fundamental trade-off here between speed and targeting this in the absolute best way," said Minnis, who estimates the program might need to dispense $720 billion to meet demand.

Since launching, the relief package has faced criticism about slow loan processing, unclear rules and limited funding that left many mom-and-pop businesses without help.

News that the $1.6 billion Shake Shack burger empire had received a maximum $10 million loan ignited public anger. Company executives said late Sunday they would return the money after finding other sources of capital.

By design, the Paycheck Protection Program was meant to get money out quickly to as many small businesses as possible, using a formula based in part on workforce and payroll size. Some of the eligibility criteria was expanded, making it possible for some businesses with more than 500 employees to qualify if, for example, they met certain size standards for their industries or other conditions.

Some other big companies that received loans appeared to have enough cash on hand to survive the economic downturn. New York City-based Lindblad Expeditions Holdings, for example, a cruise ship and travel company with 650 workers and a branding deal with National Geographic, got a $6.6 million loan. At the end of March, the business reported having about $137 million in cash on its balance sheet.

"When this crisis hit, we had two business planning cases: 1) substantial layoffs and furloughs or 2) receiving these funds and not impacting our employees," spokeswoman Audrey Chang wrote in an email. "Lindblad is the very rare travel company that has not imposed any layoffs, furloughs or salary reductions to date."

Five of the companies that the AP identified were previously under investigation by financial and other regulators, including firms that paid penalties to resolve allegations, records show.

Quantum Corp., a data storage company based in San Jose, California, that has a workforce of 800, paid a $1 million penalty last December over allegations that accounting errors resulted in overstated revenues. Quantum received a $10 million loan.

Without that loan, "we would most certainly be forced to reduce headcount. We owe it to our employees — who've stuck with us through a long and difficult turnaround — to do everything we can to save their jobs during this crisis," company spokesman Bob Wientzen wrote in an email.

Marrone Bio Innovations, a biopesticide company in Davis, California, that has about 50 workers, agreed to pay $1.8 million in 2016 after the SEC alleged its chief operating officer had inflated financial results to hit projections that it would double revenues during its first year as a public company. Marrone received a loan worth $1.7 million.

Pam Marrone, the chief executive, said the company "shouldn't be punished" for what happened with the SEC because it has had clean audits for years now. She described the investigation as a "body blow" that cost it investors and drove its stock price under $1. She said it has had to take on $40 million in debt and is still digging itself out of the financial hole.

"People don't realize how tough it is to be a small public company like us that's not yet profitable," she said.

The AP analysis found that 23 of the 94 companies had warned investors months ago that they or their auditors had significant doubts about their ability to remain viable and meet their financial obligations despite the booming economy at the time.

One was Helius Medical Technologies, a company located near Philadelphia that develops technology to help injured brains heal themselves.

The company has 19 employees and received a $323,000 loan amid a tough stretch. Its most recent annual report warned, "We may be unable to continue to operate without the threat of liquidation for the foreseeable future" and did not expect to have enough cash to go beyond May.

In an interview, president and chief executive Phil Deschamps said the company was able to raise enough capital earlier this year that, when paired with the loan, it can survive to early summer — when it expects to have filed for U.S. Food and Drug Administration approval for its device. Without the federal money, he said, the company would have lost scientists and attorneys who help prepare regulatory submissions.

Deschamps said his company followed the same rules and applied like any other, and that its device could help thousands of people in the future. But he also understands why some people might question giving money to publicly traded firms.

"If we didn't qualify for whatever reason, we would have walked away and figured out another way to do it," he said.

Another company that was facing financial issues before the virus was Enservco Corp., a Denver-based oil and gas firm. In its annual report filed last month, the company noted: "We do not generate adequate revenue to fund our current operations, and we incurred significant net operating losses during the years ended December 31, 2019, and 2018, which raise substantial doubt about our ability to continue as a going concern."

Chief executive Ian Dickinson said he welcomed the $1.9 million loan because he would've had to let go more employees than he has without it. Enservco currently has 95 employees, he said.

Dickinson said he did not believe concerns about how long the company could survive were raised in the application process with its bank.

"At the end of the day, our employees are really no different than the employees of a nonpublic company," Dickinson said. "These are funds being used to keep folks on payroll and keep food on their tables."

Before a shelter-in-place order in mid-March, the two were expecting their best year and were on track to pay off in May the $250,000 loan from the federal government that 10 years ago helped open their original shop.

"We were feeling pretty good about where we were in the world. Now it's just all turned upside down," said Davis, who had to lay off 70 workers.

Davis says they were recently able to obtain a different $10,000 disaster loan from the federal government to pay off vendors, but he says that it "evaporated within seconds." Davis and Baker submitted a Paycheck Protection Program application with supporting documents on April 2 — but are still waiting.

Editor's note: this story was updated with local information about Provenance Hotels.