AP FACT CHECK: Trump Gets a Reality Check on Coronavirus 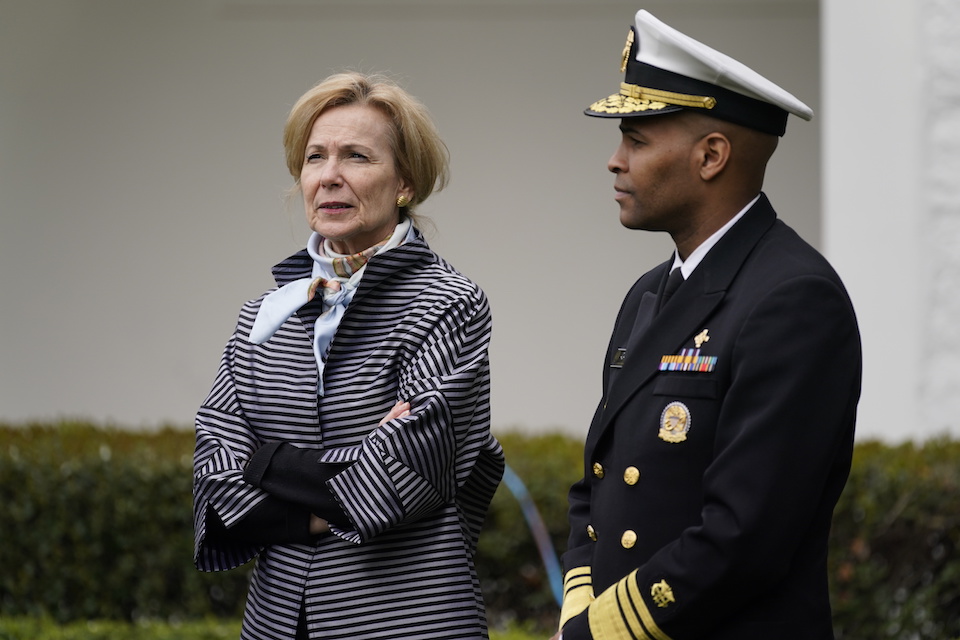 WASHINGTON (AP) — For weeks, President Donald Trump carved out a trail of groundless assurances about the coronavirus pandemic as health officials, governors and local officials sounded alarm about what was coming — and already here. That sunlit trail now has hit a wall.

On Sunday, Trump appeared to be bracing the country for a grim death toll as he accepted the advice of public-health experts and gave up on letting federal social-distance guidelines lapse Monday as initially intended. In doing so, he acknowledged what his officials had told him — that 100,000 people or many more could die from COVID-19 in the U.S. before it's over. And he recognized it won't be over for some time.

A look at some of his statements over the past week as a reality check caught up with him:

TRUMP: “I would love to have the country opened up and just raring to go by Easter." — Fox News virtual town hall Tuesday.

TRUMP: "We have to open up our country, I'm sorry.” — conference call with governors Tuesday, audio of which was obtained by The Associated Press.

THE FACTS: The public-health community, governors and many others knew when they heard Trump say this that a revival by Easter, April 12, was not going to happen. On Sunday, Trump extended the federal government's restrictive distancing recommendations until April 30. That may not be enough, either.

To be clear, the federal government did not close down the country and won't be reopening it. Restrictions on public gatherings, workplaces, mobility, store operations, schools and more were ordered by states and communities, not Washington. The federal government has imposed border controls; otherwise its social-distancing actions are mostly recommendations, not mandates.

On Sunday, Dr. Anthony Fauci of the National Institutes of Health cautioned that the virus outbreak could ultimately kill 100,000 to 200,000 Americans with possibly millions infected as it continues to surge across the nation. Trump shifted his tone and backed off trying to rush the country back to work and to normalcy in a matter of a few weeks.

The new coronavirus is not the same as the annual flu because it’s a disease that hadn’t been seen before in humans. For that reason, human populations lack immunity to the virus. It can spread unchecked, except by measures such as social distancing.

TRUMP: "Over an eight day span, the United States now does more testing than what South Korea (which has been a very successful tester) does over an eight week span. Great job!" — tweet Wednesday.

THE FACTS: The comparison with South Korea isn’t very illuminating. The U.S. has more than six times the population of South Korea, about 330 million compared with about 50 million. Yet South Korea is testing about four times more people as a percentage of its population.

The two countries are also at different stages in their outbreaks. Daily case counts are rapidly rising in the U.S., where the coronavirus took hold later on. In South Korea, the curve has been leveling off.

The U.S. count is going up fast in part because the virus is spreading and in part because of a test shortage that lasted weeks, as well as a backlog in laboratories reporting results. In that time, Trump falsely asserted that anyone who wanted or needed to get the test could.

South Korea’s coronavirus response has been marked by an emphasis on widespread testing that earned global praise. But even in that country the government is stressing social distancing measures because of worries the outbreak could pick up again.

TRUMP on the death rate from COVID-19: “I think it's substantially below 1%, because the people don't report.” — Fox News interview Thursday.

THE FACTS: No one knows the death rate. Fauci says it may end up being roughly 1%. If that turns out right, it would mean that the disease is 10 times deadlier than the average seasonal flu, with its death rate of about 0.1%. Fauci's estimate includes people whose cases are not reported.

TRUMP: “In Canada we do have troops along the border.” — news briefing Thursday.

THE FACTS: No, the U.S. has not sent troops to police the mutual closing of the Canada-U.S. border to nonessential, noncommercial traffic. The border is controlled on both sides by nonmilitary entry stations.

"Canada and the United States have the longest unmilitarized border in the world and it is very much in both of our interests for it to remain that way," Canadian Prime Minister Justin Trudeau said Thursday.

TRUMP: “We're the ones that gave the great response, and we're the ones that kept China out of here. ... If I didn't do that early call on China — and nobody wanted that to happen. Everybody thought it was just unnecessary to do it.” — news briefing Wednesday.

TRUMP: “Everybody was against it. Almost everybody, I would say, was just absolutely against it. ... I made a decision to close off to China that was weeks early. ... And I must say, doctors — nobody wanted to make that decision at the time.” — Fox News virtual town hall Tuesday.

THE FACTS: His decision was far from solo, nor was it made over opposition from health experts, as the White House coronavirus task force makes clear. His decision followed a consensus by his public health advisers that the restrictions should take place.

Health and Human Services Secretary Alex Azar, who was coordinator of the task force at the time and announced the travel restrictions, said Trump made the decision in late January after accepting the “uniform recommendation of the career public health officials here at HHS.”

While the World Health Organization did advise against the overuse of travel restrictions, Azar told reporters in February that his department’s career health officials had made a “considered recommendation, which I and the president adopted” in a bid to slow spread of the virus.

Most major airlines had already suspended flights to China prior to the announcement on Jan. 31, following the lead of several major international carriers that had stopped due to the coronavirus outbreak. Delta, American and United cited a sharp drop in demand for the flights, and an earlier State Department advisory told Americans not to travel to China because of the outbreak.

TRUMP, on the early China travel restrictions: “And if we didn't do that, thousands and thousands of people would have died.” — news briefing Wednesday.

THE FACTS: The impact hasn’t been quantified. While Fauci has praised the travel restrictions on China for slowing the virus, it’s not known how big an impact they had or if “thousands and thousands” of lives were saved.

There were plenty of gaps in containment.

Trump’s order did not fully “close” the U.S. off to China, as he asserts. It temporarily barred entry by foreign nationals who had traveled in China within the previous 14 days, with exceptions for the immediate family of U.S. citizens and permanent residents. Americans returning from China were allowed back after enhanced screening at select ports of entry and for 14 days afterward. But U.S. scientists say screenings can miss people who don’t yet show symptoms of COVID-19; while symptoms often appear within five days or six days of exposure, the incubation period is 14 days.

A recent study from the journal Science found China’s internal crackdown modestly delayed the spread of the virus. It cast doubt that travel restrictions elsewhere will do much compared with other preventive measures, citing in part the likelihood that a large number of people exposed to the virus had already been traveling internationally without being detected.

For weeks after the first U.S. case of the coronavirus was confirmed in January, government missteps caused a shortage of reliable laboratory tests for the coronavirus, leading to delays in diagnoses.

Impact on the economy

TRUMP on the economic hit: “I don’t think its going to end up being such a rough patch.” — briefing Wednesday.

THE FACTS: His optimism is a stretch.

Even in a best case — the pandemic subsides relatively quickly and economic growth and jobs come back without a long lag — some damage is done. The $2.2 trillion federal rescue package, equal to half the size of the entire federal budget, means record debt on top of the record debt that existed before the crisis.

Why is too much debt bad? A report this month by the Congressional Budget Office says that over time, the growth in the government's debt can dampen economic output and progressively reduce the income of U.S. households, among other “significant risks to the nation's fiscal and economic outlook.”

That said, the global markets consider this a good time for the U.S. government to borrow. With interest on the 10-year U.S. Treasury note at 0.75%, investors are offering to loan money to the federal government at a loss after accounting for inflation.

Meantime the longest economic expansion in U.S. history is surely over. Federal Reserve Chairman Jerome Powell says: “We may well be in a recession.”

TRUMP: “Clinical trials in New York will begin ... for existing drugs that may prove effective against the virus. ... The hydroxychloroquine and the Z-Pak, I think as a combination, probably, is looking very, very good. And it's going to be distributed. ... And I think a lot of people are going to be — hopefully — they're going to be very happy with the results.” — news briefing on March 23.

THE FACTS: For days Trump inflated the prospects for a quick treatment or cure for COVID-19. This is one example. No drugs have been approved as a treatment, cure, preventive medicine or vaccine for the disease, and public health officials say not to expect anything imminently.

Technically, doctors can already prescribe the malaria drug to patients with COVID-19, a practice known as off-label prescribing. But Trump falsely suggested to reporters that the FDA had just cleared the drug specifically for the viral pandemic spreading in communities across the U.S. That would mean that the drug had met the FDA's standards for safety and effectiveness.

Although research studies are beginning on using hydroxychloroquine specifically to treat the coronavirus, scientists urge caution about whether the drugs will live up to Trump’s promises.

Dr. Michelle Gong, a critical care chief at New York’s Montefiore Medical Center, told the Journal of the American Medical Association that it is imperative for doctors to do careful studies of drugs such as chloroquine to make sure they actually work, rather than just administering them to patients because they have nothing else to offer. Without that proof, “it is very easy for us to do more harm,” she said.

So far there is very little data to go on, mostly anecdotal reports from some other countries. But test tube studies in laboratories suggest the drugs may interfere with the coronavirus being able to enter cells. U.S. cardiologists have been warned by colleagues in China to be alert for side effects in heart patients.

In Arizona, an older couple experienced disastrous results when they took an additive used to clean fish tanks, chloroquine phosphate. The husband died and his wife was in critical condition. That prompted a major Phoenix health system to warn the public against self-medicating.

Trump’s mention of a Z-Pak is a reference to azithromycin, an antibiotic. Antibiotics kill bacteria, not viruses, but people severely ill with viral pneumonia sometimes develop secondary bacterial infections. When there are signs of that, hospitals already are using antibiotics. It's part of standard supportive care for severe pneumonia.

EDITOR'S NOTE — A look at the veracity of claims by political figures.