Are Gun Shops ‘Essential’ Businesses During a Pandemic? 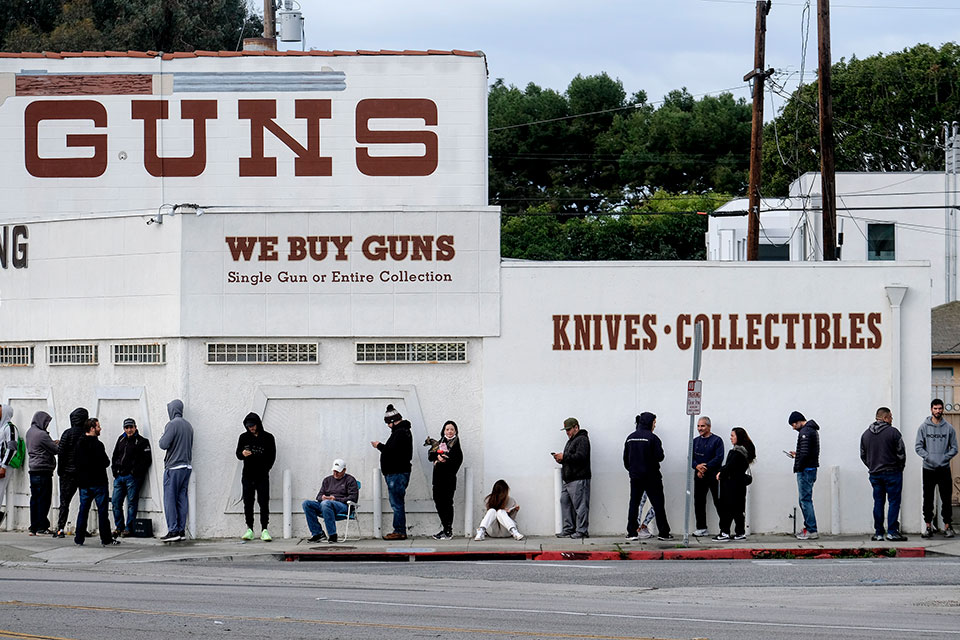 In some parts of the U.S., authorities say gun shops aren't essential businesses and should close during stay-at-home orders meant to slow the coronavirus. In other places, officials are stopping background checks for concealed carry permits. Elsewhere, city leaders have invoked emergency powers allowing bans on gun sales.

As the nation grapples with a pandemic that has upended daily life, some gun rights advocates are concerned about an erosion of Second Amendment rights just as Americans are buying firearms in record numbers to try to ensure their safety.

"When there's a national emergency, people are looking for food, water, shelter — that part is important to the survival of our nation," said Michael Cargill, owner of Central Texas Gun Works in Austin. "They are also looking for the Second Amendment to protect their families."

"Under our laws, every Texan retains their right to purchase and possess firearms," he said.

In recent weeks, firearm sales have skyrocketed. Background checks — the key barometer of gun sales — already were at record numbers in January and February, likely fueled by a presidential election year. Since the coronavirus outbreak, gun shops have reported long lines and runs on firearms and ammunition.

Background checks were up 300% on March 16, compared with the same date a year ago, according to federal data shared with the National Shooting Sports Foundation, which represents gunmakers. Since Feb. 23, each day has seen roughly double the volume over 2019, according to Mark Oliva, spokesman for the group. 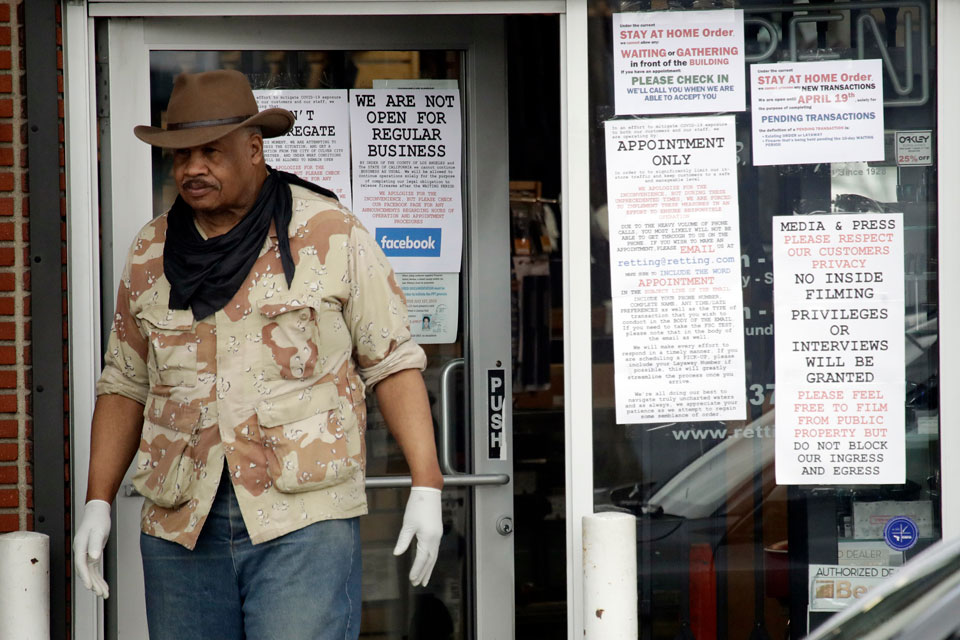 An employees stands at the entrance to a guns shop Tuesday, March 24, 2020, in Culver City, Calif. Los Angeles County Sheriff Alex Villanueva said he would like to see gun shops shut down. "We will be closing them, they are not an essential function," Villanueva said. Adding guns to households where more people are at home during a crisis increases the risk that someone will be shot, he said. (AP Photo/Marcio Jose Sanchez)"When people aren't able to provide for their own security or their own safety, they're going to take measures to make sure that they can. That's why we have that Second Amendment," Oliva said. "This is a public safety issue."

The federal background check system has been overwhelmed by the massive increase in firearm sales. What might normally take a few minutes is taking much longer, and a backlog on background checks has ballooned to about 80,000, Oliva said.

If a background check takes longer than three business days, gun dealers are permitted to allow the sale to go through unless a state has stricter waiting periods. But the National Shooting Sports Foundation has advised gun dealers not to feel beholden to complete the sale if they have concerns about the potential buyer.

"We are cautioning retailers that they may want to exercise patience and prudence," Oliva said.

Even some gun control advocates say it might not be wise to shut down federally licensed firearms dealers, whose sales require background checks. That could force buyers to use a website or seek a private sale that doesn't require a check, making it more difficult to trace a firearm if it's used in a crime.

There are risks to both closing a gun shop or keeping it open, said David Chipman, a retired agent with the federal Bureau of Alcohol, Tobacco, Firearms and Explosives.

"If you keep it open, there's the risk of first-time buyers who are largely buying out of fear and panic and untrained," said Chipman, now senior policy adviser for Giffords, a gun control advocacy group. 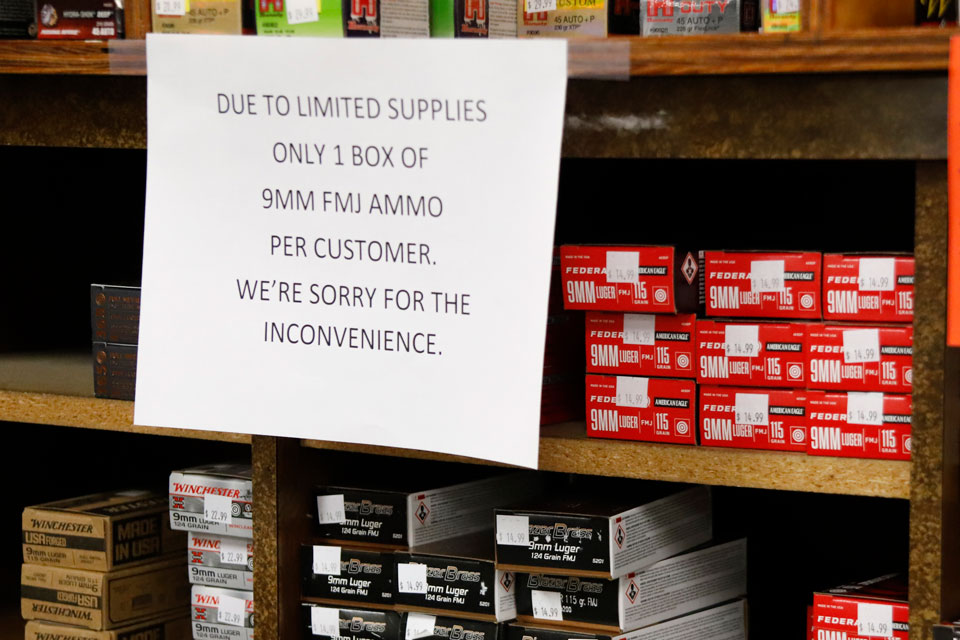 Signs point out quantity limits on certain types of ammunition after Dukes Sport Shop reopened, Wednesday, March 25, 2020, in New Castle, Pa. under the new conditions specified for gun stores. The store had closed last week when Pennsylvania Gov. Tom Wolf ordered a shut down of non-essential businesses to slow the spread of the coronavirus. (AP Photo/Keith Srakocic)Gun control advocates are concerned about a large number of new owners lacking the usual access to training on how to store and handle their weapon properly. They also worry that Americans who are stocking up now eventually will sell their firearms privately.

"If we can imagine how horrible this crisis is ... the people who hoarded the guns might decide six months from now — once they see no zombies around but they've run out of tuna and beef jerky — that they need the money to buy food," Chipman said.

In a number of U.S. cities, including New Orleans, the mayor has issued an emergency proclamation that declares the authority to restrict sales of firearms and ammunition.

In some states that have ordered people to stay home, gun stores were not among the businesses deemed essential and allowed to stay open, like grocery stores.

In Washington state “Gun shops are not considered essential and are included in the temporary closure of nonessential businesses,” a spokesperson for Governor Jay Inslee told The Trace.

That has led to confusion in California, where for the second time this week, Los Angeles County Sheriff Alex Villanueva ordered gun shops to close, challenging a finding by the legal counsel for the nation's most populous county that the stores are essential businesses.

David Prince, owner of Eagle Gun Range in Farmers Branch, Texas, near Dallas, who temporarily closed his store under Dallas County's stay-at-home order, then was allowed to reopen Wednesday when gun stores were reclassified locally as essential while the state awaited Paxton's decision.

Prince said gun stores are critical because they give people the chance to defend themselves.

"I always knew people were going to want to protect themselves.

"What I was concerned about was the look in their faces, they are covered in fear," Prince said.

"If I give them the ability to have a firearm, it gives them a fighting chance to defend their family."

The range that is part of his store is considered nonessential and has been forced to close, meaning new gun buyers can't use it to train on how to handle their firearm.