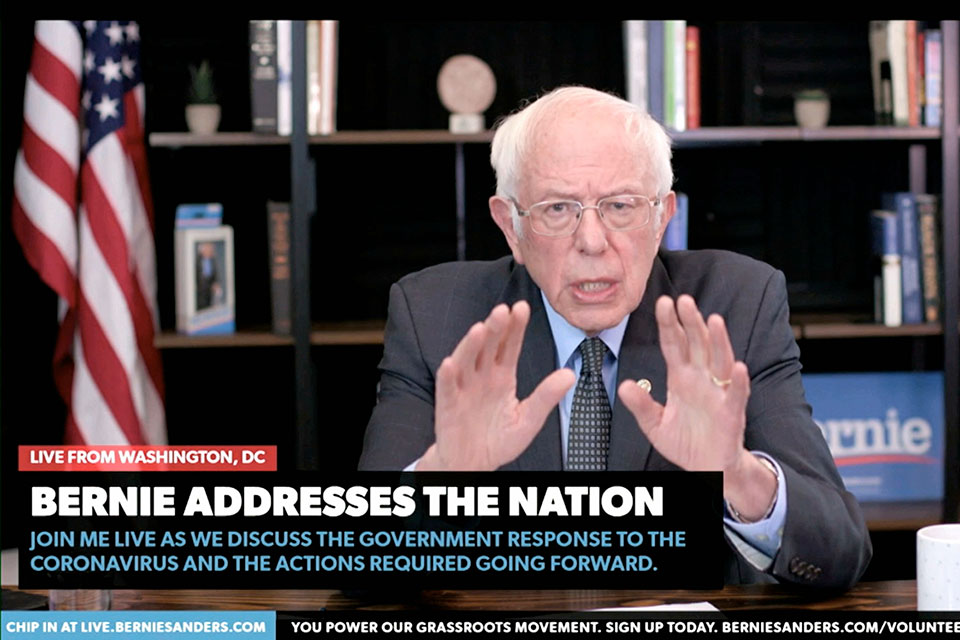 WASHINGTON (AP) — Bernie Sanders was trying to determine his next moves on Wednesday after Joe Biden swept to victory in Florida, Illinois and Arizona and seized a commanding lead in a Democratic presidential race upended by the coronavirus.

The Vermont senator's campaign manager, Faiz Shakir, said Sanders "is going to be having conversations with supporters to assess his campaign." But Shakir also suggested his candidate is no hurry to make any decisions about dropping out, noting that "the next primary contest is at least three weeks away."

More immediately, Sanders "is focused on the government response to the coronavirus outbreak and ensuring that we take care of working people and the most vulnerable," Shakir said in a statement.

Even if Sanders ultimately decides to keep running, however, he has little hope of catching Biden — especially in a political world turned as upside down as much of the rest of society amid efforts to combat the spreading virus, which has killed at least 115 people in the United States.

Neither candidate is traveling or holding campaign rallies, and much of the electorate has been staying home. Indeed, Biden's third big night in as many weeks on Tuesday came amid tremendous uncertainty about how an already severely disrupted Democratic primary will proceed.

Polls were shuttered in Ohio, and election workers and voters reported problems in the three states where primaries went forward, all of which Biden easily won. The former vice president now seems on a glide path to the nomination, his delegate lead over Sanders nearly insurmountable. Top Democratic leaders and donors have also increasingly lined up behind Biden as the best option to square off against President Donald Trump in November.

Using a livestream to address supporters from his home state of Delaware, Biden seemed ready to move past the primary. He paid tribute to the Vermont senator for advancing key issues including affordable health care and combating climate change.

"Sen. Sanders and his supporters have brought a remarkable passion and tenacity to all of these issues. Together they have shifted the fundamental conversation in this country," Biden said.

"So let me say, especially to the young voters who have been inspired by Sen. Sanders, I hear you. I know what's at stake. I know what we have to do."

With the exception of North Dakota and the Northern Mariana Islands, Sanders hasn't scored a victory since Super Tuesday on March 3. He made no moves to contact Biden immediately after Tuesday's results, according to people familiar with the situation who spoke on the condition of anonymity because they were not authorized to speak for the candidates. During online remarks before most results were in, Sanders said little about the future of the race.

Also Tuesday, Trump formally clinched the Republican presidential nomination after facing minimal opposition. But much of the action was on the Democratic side, where higher vote totals in some key states suggested enthusiasm that even the coronavirus couldn't contain. Turnout in Florida's Democratic primary surpassed the 1.7 million who cast ballots four years ago.

Some Democrats are now calling on Sanders to drop out in the name of party unity, but Sanders' advisers have suggested he won't rush to do so, betting that the political landscape could look different as the virus continues to reshape life across the country. Four years ago, Sanders kept an insurgent primary bid against Hillary Clinton going for months, even as it became clear he had no chance of winning.

Biden, meanwhile, maintained strength in the latest three states to vote with African Americans and older voters, who have been the hallmark of his campaign. He also appeared to chip away at Sanders' previous advantage with Hispanics that helped him win Nevada and California early in the race.

In Florida, Latinos made up roughly 20% of Democratic primary voters, and they largely sided with Biden. The former vice president received the support of 62% of Puerto Rican voters and 57% of Cubans, according to AP VoteCast, a broad survey of primary voters.

Still, going forward, the primary will be disrupted by the public health and economic havoc wreaked by the coronavirus.

For most people, the new coronavirus causes only mild or moderate symptoms, such as fever and cough. For some, especially older adults and people with existing health problems, it can cause more severe illness, including pneumonia. The vast majority of people recover from the new virus.

Democratic National Committee Chairman Tom Perez blasted Ohio for closing polls on such short notice, sparking confusion. But he also urged states with upcoming primaries to expand vote-by-mail and absentee balloting, as well as polling station hours — trying to ensure the primary continues, at least in some form.

"The right to vote is the foundation of our democracy, and we must do everything we can to protect and expand that right instead of bringing our democratic process to a halt," Perez said in a statement.

Four states — Louisiana, Georgia, Kentucky and Maryland — have joined Ohio in moving to push back their upcoming primaries, and others may yet do so. As Shakir noted, that has left the Democratic primary calendar empty until March 29, when Puerto Rico is scheduled to go to the polls. But island leaders are working to reschedule balloting there, too.

That means there is nowhere for Sanders to gain ground on Biden anytime soon, even if he could find a way to mount a sudden surge.

At least one of Sanders' top advisers chided party officials for going forward with voting on Tuesday.

"The Democratic Party rightly berates the GOP for ignoring scientists' warnings about climate change," David Sirota tweeted. "The same Dem Party just ignored scientists' warnings & pushed to continue in-person elections during a lethal pandemic, rather than delaying until there is vote by mail."

There were problems across the country on Tuesday. In Illinois, for instance, there was a push to relocate about 50 Chicago-area polling places after locations canceled at the last minute.

Jim Allen, a spokesman for the Chicago Board of Election Commissioners, said the board asked Democratic Gov. J.B. Pritzker last week to cancel in-person voting, but the governor refused. Pritzker countered that state law doesn't give him the authority to make the sweeping changes that elections officials wanted.

"Let me tell you this: It is exactly in times like these when the constitutional boundaries of our democracy should be respected above all else," the governor said. "And if people want to criticize me for that, well, go ahead."

There weren't problems, everywhere, though. Mel Dockens, a 49-year-old small-business owner, voted in the Phoenix suburb of Glendale and said it was a tough choice. But he went for Biden because he thought Sanders' progressive views might turn off some Democratic voters.

"It's all about electability," Dockens said. "It's not that I don't trust Bernie Sanders, but I trust (Biden) a little more."

Associated Press writers Bill Barrow in Atlanta, Katie Foody in Chicago, and Seth Borenstein and Alexandra Jaffe in Washington contributed to this report.