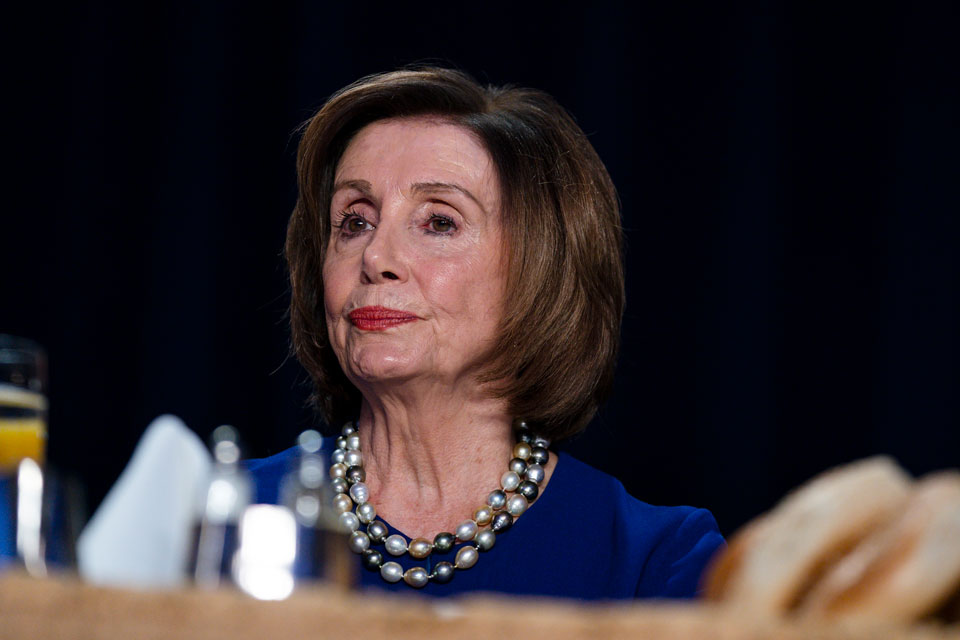 WASHINGTON (AP) — President Donald Trump unleashed his fury against those who tried to remove him from office at a prayer breakfast Thursday, a day after his acquittal by the Senate in his impeachment trial.

Speaking from a stage where he was joined by congressional leaders, including Democratic House Speaker Nancy Pelosi, who led the impeachment charge against him, Trump shattered the usual veneer of bipartisanship at the National Prayer Breakfast in Washington. 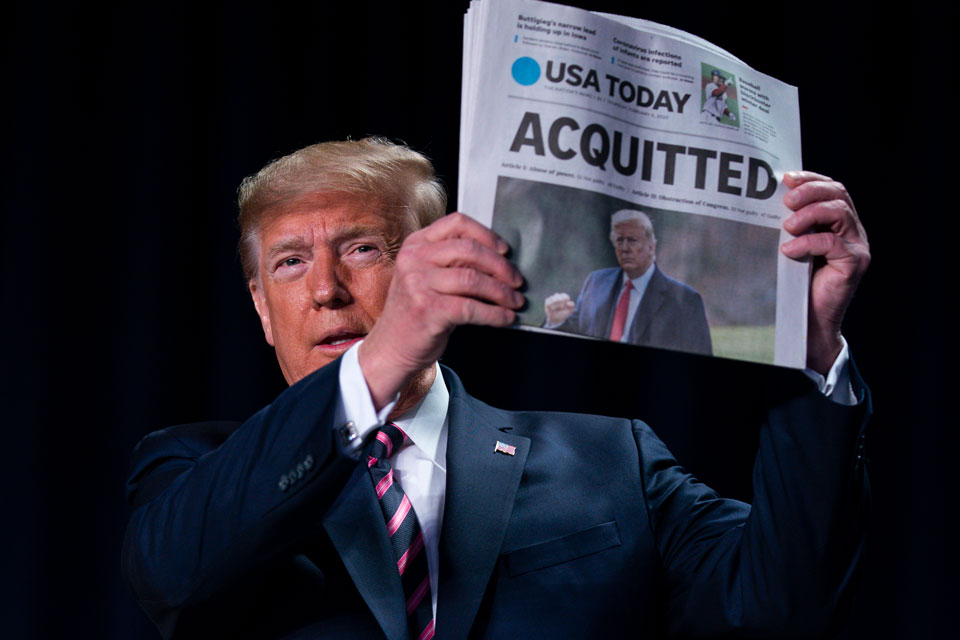 President Donald Trump holds up a newspaper with a headline that reads "ACQUITTED" during the 68th annual National Prayer Breakfast, at the Washington Hilton, Thursday, Feb. 6, 2020, in Washington. (AP Photo/ Evan Vucci)"As everybody knows, my family, our great country and your president have been put through a terrible ordeal by some very dishonest and corrupt people," Trump said at the annual event. His airing of grievances came hours before he was to deliver a full response to the impeachment vote at the White House surrounded by supporters.

"They have done everything possible to destroy us and by so doing very badly hurt our nation," said Trump, who triumphantly held up copies of two newspapers with banner "ACQUITTED" headlines as he took the stage.

His remarks were especially jarring and whiplash-inducing coming after a series of scripture-quoting speeches, including a keynote address by Arthur Brooks, a Harvard professor and president of a conservative think tank, who had bemoaned a "crisis of contempt and polarization" in the nation and urged those gathered to "love your enemies."

"I don't know if I agree with you," Trump said as he took the microphone, and then he proceeded to demonstrate it.

"I don't like people who use their faith as justification for doing what they know is wrong," he said in an apparent reference to Utah Sen. Mitt Romney, a longtime Trump critic who cited his faith in becoming the only Republican to vote for Trump's removal.

"Nor do I like people who say 'I pray for you' when you know that is not so,'" he said, in a reference to Pelosi, who has offered that message for the president when the two leaders have sparred publicly.

The House speaker shook her head at various points during Trump's remarks but did not appear to interact with Trump personally. Earlier she had offered a prayer for the poor and the persecuted.

She said later that Trump's remarks were "so completely inappropriate, especially at a prayer breakfast.." She took particular issue with his swipe at Romney's faith and said that yes, she does pray for the president.

His comments were a clear sign that the post-impeachment Trump is emboldened like never before as he barrels ahead in his reelection fight with a united Republican Party behind him.

Republican senators voted largely in lockstep to acquit Trump on Wednesday, relying on a multitude of rationales for keeping him in office: He's guilty, but his conduct wasn't impeachable; his July telephone conversation with Ukraine's president was a "perfect call"; there's an election in 10 months and it's up to voters to determine his fate.

For Trump, there was one overriding message to draw from his acquittal: Even at a time of maximum political peril, it's his Republican Party.

Trump had avoided talk of impeachment in his State of the Union address on Tuesday night, holding his tongue until the Senate had cast its official acquittal vote.

By the next day, he was already moving to use impeachment as a 2020 rallying cry.

Trump tweeted after the Senate vote that he would mark his acquittal with a statement to the nation at noon Thursday to "discuss our Country's VICTORY on the Impeachment Hoax!" The president's supporters were being invited to join him at the East Room event.

Asked what Trump would say, White House Press Secretary Stephanie Grisham told Fox News Channel that he would talk about "just how horribly he was treated, and you know, that maybe people should pay for that."

"People need to understand what the Democrats did was dishonest and it was corrupt."

The president and his allies have been on a victory lap since Wednesday, sending giddy tweets needling his accusers and Democrats and celebrating.

Indeed, the night of the impeachment vote was one of revelry for members of the president's circle. In Washington, many, including Trump's eldest son, Donald Trump Jr, his girlfriend, former Fox News host Kimberly Guilfoyle, and the president's former campaign manager, Corey Lewandowski, gathered at the president's hotel a few blocks from the White House, one of the few MAGA safe zones in the deeply Democratic city.

The president himself remained at the White House but worked the phones, calling several confidants to exult about the verdict, bitterly complain about Romney and to promise that his Thursday noon statement would not want to be missed, according to a person familiar with the calls but not authorized to speak publicly about private discussions.

The White House and Trump's allies were also reveling over the ongoing chaos in Iowa, where the Democrats' first presidential nominating contest was thrown into disarray by a tabulating mishap, with no official winner declared three days after the caucuses. That deprived any candidate of a clear victory and allowed Trump to paint the Democrats as incompetent.

Trump's tenuous relationship with the GOP establishment has been a consistent theme of his presidency, and he has repeatedly put the party's values to the test. But now, their fates are tied as never before.

Taking their cues from Senate Majority Leader Mitch McConnell, with whom Trump has a respectful, if not particularly close, relationship, GOP senators fell in line to block new witnesses and documents in the trial. The final vote Wednesday was no different: Only Romney, a longtime Trump critic, voted for removal.