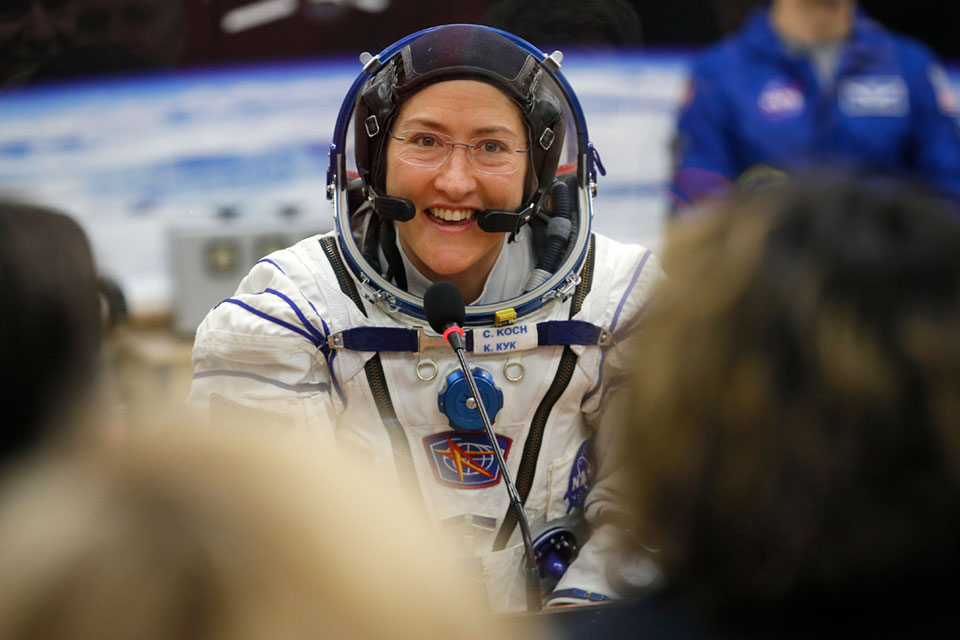 CAPE CANAVERAL, Fla. (AP) — After nearly 11 months in orbit, the astronaut holding the record for the longest spaceflight by a woman can't wait to dig into some salsa and chips, and swim and surf in the Gulf of Mexico.

NASA astronaut Christina Koch told The Associated Press on Tuesday — her 319th consecutive day in space — that taking part in the first all-female spacewalk was the highlight of her mission. She's been living on the International Space Station since March and returns to Earth on Feb. 6, landing in Kazakhstan with two colleagues aboard a Russian capsule.

Koch said she and fellow NASA astronaut Jessica Meir appreciated that the Oct. 18 spacewalk "could serve as an inspiration for future space explorers."

"We both drew a lot of inspiration from seeing people that were reflections of ourselves as we were growing up and developing our dreams to become astronauts," Koch said from the space station. "So to recognize that maybe we could pay that forward and serve the same for those that are up and coming was just such a highlight."

Koch's astronaut class of 2013 was split equally between women and men, but NASA's astronaut corps as a whole is male-dominated. Right now, four men and two women are living at the space station.

"Diversity is important, and I think it is something worth fighting for," said Koch, an electrical engineer who also has a physics degree.

Koch's 328-day mission will be the second-longest by an American, trailing Scott Kelly's flight by 12 days. She's already set a record for the longest single spaceflight by a woman.

She took time out for a pair of news interviews Tuesday, the 34th anniversary of the space shuttle Challenger accident that claimed all seven lives on board.

She said she loves her work — she conducted six spacewalks and tended to science experiments — but she also misses her friends and family.

"If they could visit here, I would continue staying for a very long time," said Koch, a first-time space flier. "For their sake, I think that it's probably time to head home."

Her biggest surprise is how easily and quickly she adapted both mentally and physically to weightlessness.

"I don't even really realize that I'm floating anymore," she said.

Why do chips and salsa top her most-missed food list? Crunchy food like chips are banned on the space station because the crumbs could float away and clog equipment. "I haven't had chips in about 10 1/2 months," she explained, "but I have had a fresh apple" thanks to regular cargo deliveries.

Another thing she misses: the ability to put things down and not have them float away.

She's gotten used to using Velcro and tape to make things stay put, "so I hope that when I go back to Earth, I don't accidentally drop things, especially when I'm handing them to people."

Kelly, whose mission spanned 2015 and 2016, has given her advance notice of what to expect.

"It's a great reminder to keep mentoring," Koch said.

When her record is broken, "I hope to mentor that person just as I've been mentored."

Koch said it was crucial staying connected to loved ones through phone calls and video conferences. She watched as her nieces and nephews opened their Christmas presents. But it's also special celebrating holidays in space, she noted, which "kind of takes any sting off of missing your family."

Koch grew up in Jacksonville, North Carolina, and now lives near the Gulf of Mexico in Galveston, Texas, with her husband, Bob. She said she can't wait for their next wedding anniversary, Christmas at home and his birthday.

Her 41st birthday is Wednesday. How does she plan to celebrate?

Playing Scrabble with her U.S., Italian and Russian crewmates, as challenging as that might be in weightlessness. She packed a travel version of the game and has been too busy to enjoy it.