McConnell Not Ruling Out Witnesses in Impeachment Trial 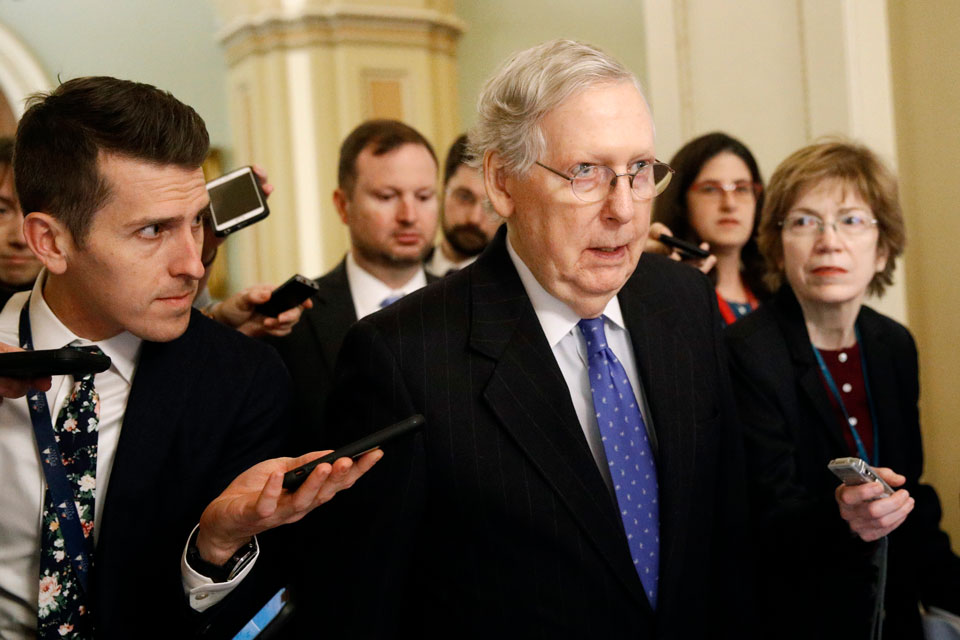 PALM BEACH, Fla. (AP) — Senate Majority Leader Mitch McConnell said Monday that he was not ruling out calling witnesses in President Donald Trump's impeachment trial — but indicated he was in no hurry to seek new testimony either — as lawmakers remain at an impasse over the form of the trial by the GOP-controlled Senate.

The House voted Wednesday to impeach Trump, who became only the third president in U.S. history to be formally charged with "high crimes and misdemeanors." But the Senate trial may be held up until lawmakers can agree on how to proceed. Minority Leader Chuck Schumer is demanding witnesses who refused to appear during House committee hearings, including acting White House chief of staff Mick Mulvaney and former national security adviser John Bolton.

McConnell, who has all-but-promised a swift acquittal of the president, has resisted making any guarantees, and has cautioned Trump against seeking the testimony of witnesses he desires for fear of elongating the trial. Instead, he appears to have secured Republican support for his plans to impose a framework drawn from the 1999 impeachment trial of President Bill Clinton.

"We haven't ruled out witnesses," McConnell said Monday in an interview with "Fox and Friends."

"We've said let's handle this case just like we did with President Clinton. Fair is fair."

That trial featured a 100-0 vote on arrangements that established two weeks of presentations and argument before a partisan tally in which Republicans, who held the majority, called a limited number of witnesses. But Democrats now would need Republican votes to secure witness testimony — and Republicans believe they have the votes to eventually block those requests.

In a letter Monday to all Senators, Schumer argued that the circumstances in the Trump trial are different from that of Clinton, who was impeached after a lengthy independent counsel investigation in which witnesses had already testified numerous times under oath. Schumer rejected the Clinton model, saying waiting until after the presentations to decide on witnesses would "foreclose the possibility of obtaining such evidence because it will be too late."

Schumer also demanded that the Senate, in addition to receiving testimony, also compel the Trump administration to turn over documents and emails relevant to the case, including on the decision to withhold military assistance from Ukraine.

Schumer told The Associated Press on Monday that he stands ready to negotiate with McConnell, and that he hopes questions about witnesses can be settled "right at the beginning." Without witnesses, he said, any trial would be "Kafkaesque."

"Let's put it like this: If there are no documents and no witnesses, it will be very hard to come to an agreement," Schumer said.

If McConnell won't agree, "We can go to the floor and demand votes, and we will," he added.

Schumer told AP the Democrats aren't trying to delay the proceedings, saying the witnesses and the documents his party is asking for are directly relevant to the charges in the House impeachment articles.

Meanwhile, the White House is projecting confidence that it will prevail in a constitutional spat with Democrats. House Speaker Nancy Pelosi has delayed sending the articles of impeachment to the Senate in hopes of giving Schumer more leverage in talks with McConnell. But the White House believes Pelosi won't be able to hold out much longer.

"She will yield. There's no way she can hold this position," Marc Short, the chief of staff to Vice President Mike Pence, told "Fox News Sunday."

"We think her case is going nowhere.''

The impasse between the Senate leaders leaves open the possibility of a protracted delay until the articles are delivered. 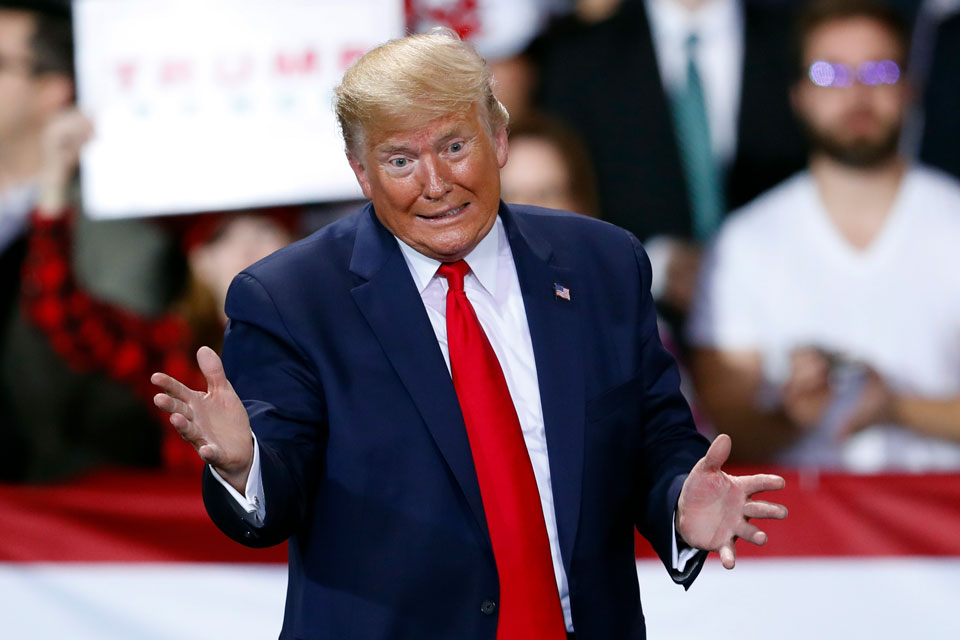 In this Dec. 18, 2019, photo, President Donald Trump speaks at a campaign rally in Battle Creek, Mich. Using stark “Us versus Them” language, Trump and his campaign are trying to frame impeachment not as judgment on his conduct but as a culture war referendum on him and his supporters, aiming to motivate his base heading into an election year (AP Photo/Paul Sancya)Trump has called the holdup "unfair" and claimed that Democrats were violating the Constitution, as the delay threatened to prolong the pain of impeachment and cast uncertainty on the timing of the vote Trump is set to claim as vindication.

"Pelosi gives us the most unfair trial in the history of the U.S. Congress, and now she is crying for fairness in the Senate, and breaking all rules while doing so," Trump tweeted Monday from his private club in Palm Beach, Fla., where he is on a more than two-week holiday vacation. "She lost Congress once, she will do it again!"

Short called Pelosi's delay unacceptable, saying she's "trampling" Trump's rights to "rush this through, and now we're going to hold it up to demand a longer process in the Senate with more witnesses."

"If her case is so air-tight ... why does she need more witnesses to make her case?'' Short said.

White House officials have also taken to highlighting Democrats' arguments that removing Trump was an "urgent" matter before the House impeachment vote, as they seek to put pressure on Pelosi to send the articles of impeachment to the Senate.

At one point, Trump had demanded the testimony of witnesses of his own, like Democrats Joe Biden and his son Hunter, and the intelligence community whistleblower whose summer complaint sparked the impeachment probe. But he has since relented after concerted lobbying by McConnell and other Senate Republicans who pushed him to accept the swift acquittal from the Senate and not to risk injecting uncertainty into the process by calling witnesses.

The Constitution requires a two-thirds majority in the Senate to convict in an impeachment trial — and Republicans have expressed confidence that they have more than enough votes to keep Trump in office.

A separate but related fight flared Monday in the courts, where the Justice Department told a federal appeals court that it should dismiss a lawsuit that seeks to force former White House counsel Don McGahn to testify before Congress. Justice Department lawyers say there's no urgency to resolving that case now that the House has passed two articles of impeachment against the president.