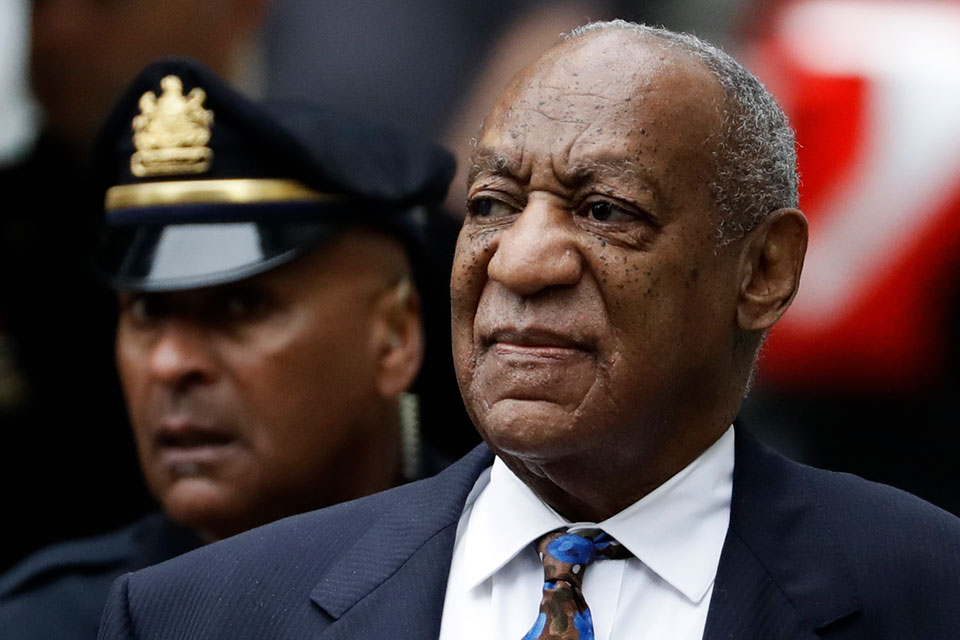 Bill Cosby lost his bid to overturn his sexual assault conviction Tuesday, as an appeals court upheld the verdict in the first celebrity trial of the #MeToo era.

In its ruling, the Superior Court upheld the right of prosecutors to call other accusers to bolster their case — the same issue that was fought over in pretrial hearings before movie mogul Harvey Weinstein's sexual assault trial.

"This decision is a reminder that no one is above the law," Andrea Constand, the victim in Cosby's case, told The Associated Press on Tuesday.

Cosby's lawyers in his appeal said the suburban Philadelphia judge had improperly allowed the five women to testify at last year's retrial although he'd let just one woman testify at the first trial in 2017.

But the Superior Court said Pennsylvania law allows the testimony if it shows Cosby had a "signature" pattern of drugging and molesting women.

"Here, the (prior bad act) evidence established appellant's unique sexual assault playbook," the court said, noting that "no two events will ever be identical."

The court went on to say that the similarities were no accident.

"Not only did the (prior bad act) evidence tend to establish a predictable pattern of criminal sexual behavior unique to appellant, it simultaneously tended to undermine any claim that appellant was unaware of or mistaken about victim's failure to consent to the sexual contact that formed the basis of the aggravated indecent assault charges," the panel said in its ruling.

Lawyers for Cosby had argued eight issues on appeal, including the judge's decision to let prosecutors use portions of a deposition he gave in the accuser's related civil suit. His lawyers also argued that he had a binding promise from a former prosecutor that he would never be charged in the case and could testify freely at a deposition in accuser Andrea Constand's related lawsuit.

The appeals court rejected those arguments and upheld the judge's classification of Cosby as a sexually violent predator.

Cosby, 82, can now ask the state Supreme Court to consider his appeal.

The long-married Cosby, once beloved as "America's Dad" for his TV role as Dr. Cliff Huxtable on the hugely popular sitcom "The Cosby Show," has acknowledged having sexual contact with a string of younger women, many of whom came to him for career advice and took alcohol or pills he offered them.

After the ruling, Cosby's spokesman accused the appeals court of failing to properly review the case and repeated longstanding attacks made by Cosby's wife and others on the court system.

"We're not shocked because it shows the world that this isn't about justice, but this is a political scheme to destroy America's Dad, however they will not stop us and we will prevail in the State Supreme Court," spokesman Andrew Wyatt said in a statement.

"Mr. Cosby remains hopeful and he stands behind his innocence."

Cosby has been serving a three- to 10-year prison term for the 2004 encounter at his suburban Philadelphia home, which he deemed consensual.

He was arrested in 2014 after a federal judge unsealed portions of the civil lawsuit deposition at the request of The Associated Press and new prosecutors reopened the criminal case.

The Superior Court panel, in arguments in Harrisburg in August, asked why Cosby's lawyers didn't get a written immunity agreement and have it approved by a judge, instead of relying on an oral promise.

"This is not a low-budget operation we were operating here. They had an unlimited budget," said Superior Court Judge John T. Bender, who questioned whether any court would have approved the deal.

Judge Steven O'Neill's decision to let the other accusers testify came after more than 60 women accused Cosby of sexual misconduct. Prosecutors asked to call 19 of them. Superior Court Judge John Bender appeared to agree with O'Neill's logic in letting some take the stand.

"The reality of it is, he gives them drugs and then he sexually assaults them. And in four out of the five, those were in mentor situations," Bender said.

Kristen L. Weisenberger, representing Cosby, said one of the women wasn't even sure she was sexually assaulted. However, prosecutors said, that's how Cosby planned it.

O'Neill had allowed just one other accuser at Cosby's first trial in 2017, when the jury deadlocked. Cosby's lawyers called his later decision to let more women testify arbitrary and prejudicial.

He and his lawyers and agents have suggested that many of the accusers were gold-diggers seeking money or fame. He told BlackPressUSA in November that he expects to serve the maximum 10-year sentence if he loses the appeal, because he would never express remorse to the parole board.

Constand, who first went to police about Cosby in 2005, thanked Montgomery County District Attorney Kevin Steele for fighting "tirelessly throughout two trials and the appeals process" for her.

A former professional basketball player turned massage therapist, she is launching a foundation in her native Ontario to help other sexual assault victims with their healing. She is also starting to work with law enforcement groups to help them understand the process that victims go through.

She described herself as "pleased and relieved" the verdict was upheld.

The AP does not typically identify sexual assault victims without their permission, which Constand has granted.

This story has been updated to correct that the court ruled Tuesday, not Monday.