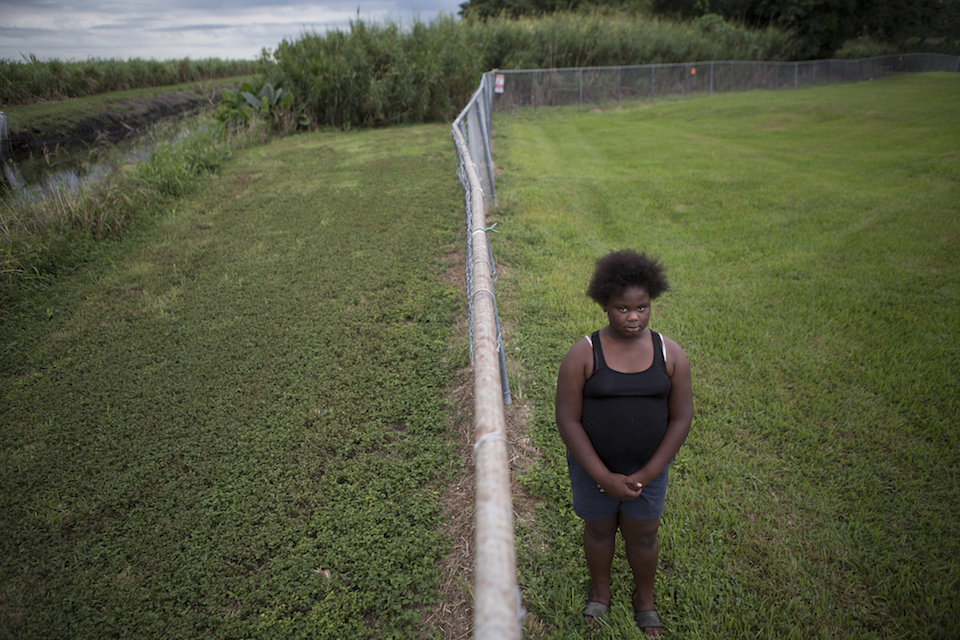 PAHOKEE, Fla. (AP) — For residents of the Glades, a string of poor, predominantly African American rural towns dotting the southern shore of Florida’s Lake Okeechobee, the beginning of the annual sugar cane harvest in October means the arrival of "black snow."

"You'd hate to come down here when it's snowing,” said Kaniyah Patterson, an asthmatic 12-year-old who lives with her mother and grandmother in a housing project surrounded by several large sugar cane fields in the Palm Beach County community of Pahokee.

The "snow" is an airborne byproduct of the disputed practice of burning sugar fields before harvests. Kaniyah says it "stuffs up" her nose and stains her clothes. At times, she says, the poor air quality makes it difficult to keep up with her friends when playing outside.

For generations, Florida’s sugar cane farmers have legally set fire to their fields prior to the harvest, leaving only the cane, a practice that reduces transportation costs because they ship the cane without the surrounding vegetation.

In the Glades community alone, home to more than 40,000 people, cane growers burned more than 1.5 million acres (2 million hectares) of sugar cane between 2008 and 2018 — a land mass about the size of Delaware — according to state data.

In several major sugar-producing countries such as Brazil, the practice is being phased out due to health concerns. The fires can produce sooty plumes of smoke that hover over the surrounding communities and dust the area with burnt flakes of plant matter.

Disagreement on harms to health

Research in Florida on the potential health consequences of sugar cane burning has produced conflicting results: A 2015 study funded by the U.S. Education Department concludes that residents of areas such as the Glades that are frequently exposed to large burns experience a greater amount of “respiratory distress.”

The Environmental Protection Agency has said residents are exposed to hazardous air pollutants on par with some urban areas.

But an analysis last year by the American Lung Association and data compiled by the Florida Department of Environmental Protection both concluded that air quality in Palm Beach County was up to code.

Poor communities of color most affected

A class-action lawsuit filed in June against nearly a dozen sugar companies in the region — which leads the nation in sugar production — claims the burns reduce property values and compromise air quality with toxic carcinogens.

The two other states where sugar is grown are Texas and Louisiana. In Florida, 75% of sugar is grown in the Glades region of Palm Beach County. The rest is harvested in the adjacent counties of Hendry, Glades and Martin.

Patrick Ferguson, who is leading an anti-burn campaign for the Sierra Club, called the matter a lopsided “environmental justice issue” that disproportionately affects poor communities of color.

U.S. Sugar, one of the companies listed in the lawsuit, stands by the practice of burning. It contends that its methods are safe, closely monitored and highly regulated, and that the overall well-being of its workers and the greater community is “vitally important” to the company.

Opponents of burning argue cleaner, safer alternatives exist. The Sierra Club and local activists are urging growers to switch to a practice known as green harvesting, a burn-free process that is already the industry standard in Brazil. They argue that instead of burning, sugar producers could repurpose plant waste into mulch, bioplastics or a clean energy source.

In Florida, the method is sometimes employed by local growers at times when they are not able to burn.

But a full switch to green harvesting could mean a massive and costly overhaul of production infrastructure for sugar producers. U.S. Sugar, for one, has yet to find a large-scale use for the massive amounts of leaf material left over after a harvest, company spokesman Judy Sanchez said.

In the past, the company has said those who oppose sugar field burning are attacking the very industry that supports the local economy.

Activist Kina Phillips, 44, a mother of three from South Bay whose husband works for one of the local sugar companies, said that is not the case.

“We don’t want the sugar mill to close down,” Phillips said. “Why would I take food out of my own mouth?”

But Phillips said she believes green harvesting would be healthier while potentially bringing more jobs to the poor area.

She calls the burning season a “battle,” especially for her 5-year-old grandson Jamal Tillman, whose immune system suffers and asthma worsens. Philips declared that it’s time for locals to “step up and stop turning a blind eye” to a powerful industry that she says is poisoning her community.

No change to law yet

Florida law requires sugar companies to take into account wind directions at the start of a burn to avoid populated areas, but residents say that because their communities are so close to the sugar crops, they get the smoke anyway.

Last month, Florida Department of Agriculture Commissioner Nicole “Nikki” Fried announced that while sugar cane burning would remain legal, she would implement a series of rule changes, including working with producers to encourage green harvesting and potentially shortening burn seasons.

In Pahokee, Kaniyah Patterson’s 64-year-old grandmother Annie Young, who also has asthma, said she is doubtful anything will change.