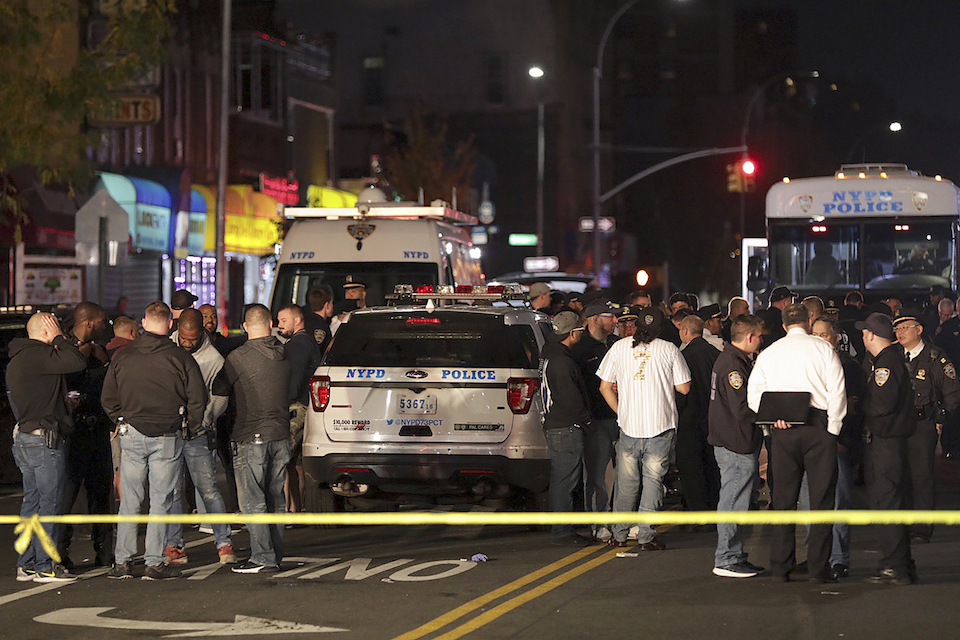 YORK (AP) — A surge in violent police clashes has left a trail of bodies across New York City, stoking tensions between officers and critics who say they have been too quick to use deadly force.

Since mid-October, New York Police Department officers have shot five people, killing four of them — a torrent that left department veterans struggling to recall another time there were so many on-duty shootings in the city in such a short span.

Adding to the chasm: bystander video that showed a white police officer punching a black teen during a brawl on a Brooklyn subway platform. Hundreds of people last weekend marched in protest and the family of one teen said it will sue.

Tensions between police and public

Why the sudden uptick in confrontations between police and the public? It depends on who you ask.

In law enforcement circles, there's a growing feeling that people are feeling emboldened to act out against police officers. In a series of attacks over the summer, several officers were soaked with water , others were hit with a milk carton and Chinese food and another had his body camera ripped off.

The city's largest police union, the Police Benevolent Association, says a lack of support from police leaders has left officers feeling isolated and abandoned, exemplified by the decision in August to fire an officer in the 2014 chokehold death of Eric Garner.

And the unions say reluctance by some judges and prosecutors to put suspects in jail, coupled with criminal justice reforms, such as the elimination of bail for most non-violent felonies on Jan. 1, will make it harder for officers to keep the streets and themselves safe.

"The message is that there are no consequences for your actions," said Joseph Giacalone, a former NYPD sergeant who now teaches at John Jay College of Criminal Justice.

They argue the police have been provoking some of the recent flashes of violence with aggressive tactics, such as arresting people for jumping subway turnstiles and running down people suspected of carrying guns.

Public defender and police critic Rebecca Kavanagh pointed to the Sept. 29 friendly fire death of Officer Brian Mulkeen, which she said would not have happened had officers not chased a man who ran away when they approached him.

Mulkeen, part of an anti-crime unit tasked with removing guns from the streets, was wrestling with the man, 27-year-old Antonio Williams, and could be heard on body-camera footage yelling, "He's reaching for it! He's reaching for it!" before his fellow officers opened fire.

Joo-Hyun Kang, the director of Communities United for Police Reform, said laws keeping disciplinary files secret and the outsized power of the NYPD and unions are enabling police officers to use deadly force with little or no consequence.

"Police violence isn't new, but abusive and violent policing is out of control in New York City," said Kang, the director of the watchdog group, which advocated for the firing of all officers in Garner's death.

Police officials noted that some of the people shot by officers had criminal records or prior police interactions, but Kavanagh said those details can work to demonize a person and make it seem like shooting them was justified.

The recent string of officer-involved violence began with an Oct. 15 shooting outside a Brooklyn public housing complex that police reform advocates and the slain man's family say happened under murky circumstances.

The police department said 30-year-old Nasheem Prioleau was killed after pointing a gun and possibly firing at a pair of anti-crime officers who saw him shooting at another person and had ordered him to drop the weapon.

However, Kavanagh said it was later determined that a 9mm pistol found at the scene was not fired, and the person Prioleau was purportedly shooting at has never been found.

"The night Nasheem Prioleau was killed, there was definitely a gun battle, because people including myself heard the gunfire all over Brooklyn," Kavanagh said. "Turns out it was just from one side — the police."

Four hours later, officers in the Bronx shot a man suspected of firing a gun at subway station. He was hit in the shoulder and taken to a hospital for treatment.

Another, a driver pulled over in the Bronx for not wearing a seat belt, was shot on Oct. 17 after police said he shifted his car into gear and began moving it back and forth, endangering officers. Police said they found drugs in his car, but no gun.

"It's like when police engage someone in a high-speed chase for driving with a suspended license, putting so many other people's lives at risk," Kavanagh said. "It doesn't make any sense."

And then there was the man with the chair, who was killed on Oct. 25 after police said he ran into a nail salon in Brooklyn's Brownsville neighborhood and attacked Officer Lesly Lafontant. The man's family said they had been seeking mental health treatment on his behalf.

"Policing is a difficult job, and that's nothing new," said Dermot Shea, who will take over as police commissioner on Dec. 1. "Let me let me be firm: We have zero tolerance for any attacks on our officers."