All Eyes on Texas Governor as Calls Grow to Halt Execution 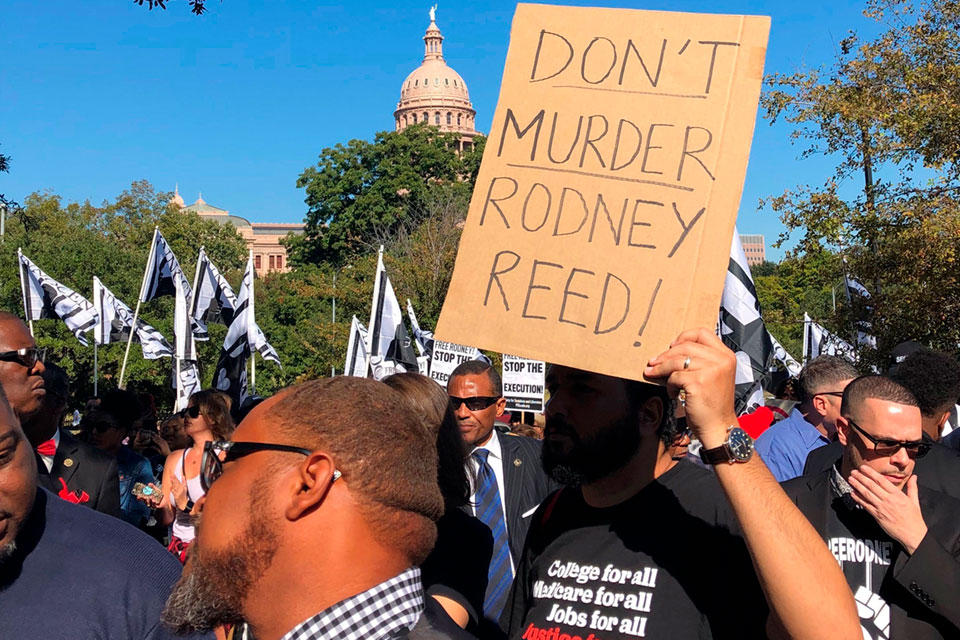 AUSTIN, Texas (AP) — In his five years as Texas' governor, Republican Greg Abbott has overseen the execution of nearly 50 prisoners while only once sparing a condemned man's life.

But Abbott — who has proudly referred to the death penalty as "Texas justice" — has never confronted such intense pressure to halt a lethal injection like he is facing in the case of Rodney Reed, who is set to die this month for a 1996 killing despite new evidence that even a growing number of Republican legislators say raises serious questions about his guilt.

On Saturday, supporters of Reed held their biggest protest yet outside the governor's mansion, escalating a public campaign that now counts Beyoncé, Kim Kardashian and Oprah Winfrey among the celebrities who have urged Abbott to call off the Nov. 20 execution. So, too, has the European Union's ambassador to the U.S.

"Only thing I would tell him is, honestly, just look at the evidence," said Rodrick Reed, Rodney's brother.

It's unclear if the public pressure is making any impression on Abbott, who was a law and order state attorney general before he was elected governor. Abbott hasn't spoken publicly about Reed's case. Even Republican lawmakers who are close to the governor and have lobbied his office in recent days and weeks for a reprieve say they're in the dark about his thinking.

"They said the governor has heard about it and is taking a very deliberative and thoughtful analysis," Republican state Rep. Matt Krause said. "But they didn't give me an indication one way or the other on which way he'd be."

Reed, now 51, was convicted of raping and strangling 19-year-old Stacy Stites while she made her way to work at a supermarket in Bastrop, a rural community about 30 miles southeast of Austin.

Reed has long maintained that Stites was killed by her fiance, former police officer Jimmy Fennell. Reed says Fennell was angry because Stites, who was White, was having an affair with Reed, who is Black. In recent weeks, Reed's attorneys have presented affidavits that support his claims, including one by a former prison inmate who claims Fennell bragged about killing Stites and referred to Reed by a racial slur.

Reed's lawyers say other recent affidavits also corroborate the relationship between Stites and Reed. Fennell's attorney has said his client didn't kill Stites, and prosecutors maintain that they believe Reed is guilty.

Support for the death penalty has been declining in recent years, but in Texas, Abbott hasn't relaxed his position. A practicing Roman Catholic, Abbott breaks with the church on the Vatican's view that capital punishment can never be sanctioned, and efforts to scale back the types of crimes that carry the death penalty in Texas have stalled under his watch.

Only once has Abbott spared the life of a convicted killer shortly before the scheduled execution: Last year, he accepted a rare recommendation of clemency from Texas' parole board and commuted the sentence of Thomas "Bart" Whitaker, who fatally shot his mother and brother. Abbott did so after Whitaker's father, who was also shot, asked for mercy.

It's not the first time Abbott's decision-making has been in the spotlight over a high-profile death penalty case. While serving as Texas attorney general in 2011, Abbott ruled that a state forensic panel could not consider old evidence in the case against Cameron Todd Willingham, who was executed for a fire that killed his children but whose guilt remained in question after his death because the arson science used to convict him had since been debunked.

In a letter to Abbott this week, more than a dozen Republicans said that getting it wrong with Reed could "erode public trust — not only in capital punishment, but in Texas justice itself."

"We have a lot of executions, right? We're Texas," said Republican state Rep. James White, who has served in the Legislature for nearly a decade. "This probably is the first one I've directly reached out to the attorney general's office and the governor's office on. Not on the prospect that I believe that Mr. Reed is innocent. But I do believe there is a lot of information and evidence that does deserve to be vetted."