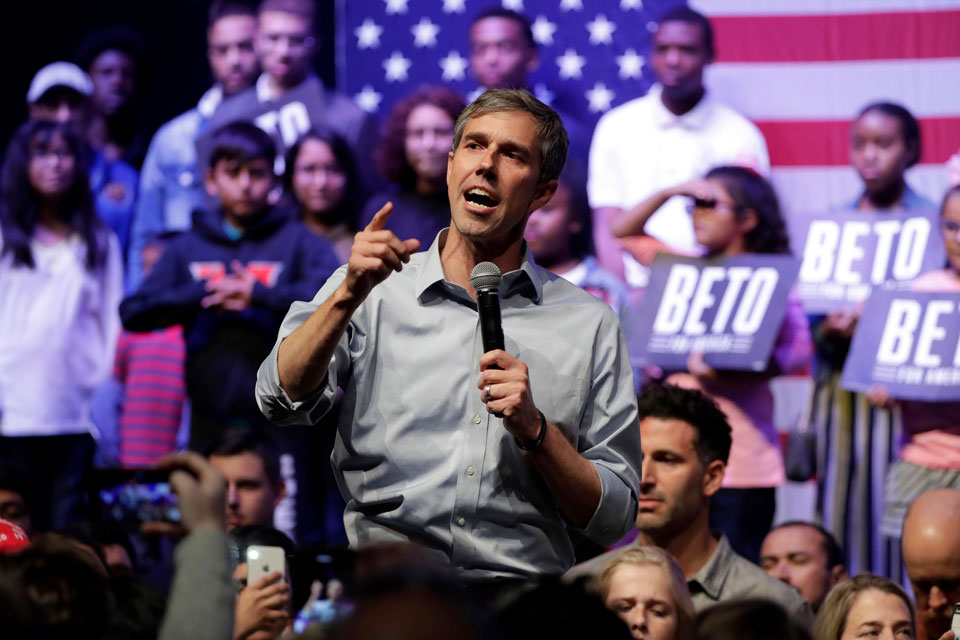 WASHINGTON (AP) — Beto O'Rourke, the former Texas congressman, announced Friday that he was ending his Democratic presidential campaign, which failed to recapture the enthusiasm, interest and fundraising prowess of his 2018 Senate race.

In an online post, O'Rourke said, "My service to the country will not be as a candidate or as the nominee." He planned to address supporters later Friday at an event in Iowa.

O'Rourke was urged to run for president by many Democrats, including supporters of former President Barack Obama, who were energized by his narrow Senate loss last year in Texas, a reliably Republican state. He raised a record $80 million from donors across the country, visited every county in Texas and used social media and livestreaming video to engage directly with voters. He ultimately lost to incumbent Republican Sen. Ted Cruz by 3 percentage points.

But O'Rourke, 47, struggled to replicate that model in the presidential primary, and both his polling and his fundraising dwindled significantly in recent months.

'It is in the best interests of the country'

O'Rourke's decision comes as the Democratic primary enters a critical stretch. With three months until the kickoff Iowa caucuses, polls consistently show a trio of candidates leading the way: former Vice President Joe Biden, Massachusetts Sen. Elizabeth Warren and Vermont Sen. Bernie Sanders, with Pete Buttigieg, the mayor of South Bend, Indiana, showing strength in Iowa, as well. Lower polling candidates face difficult questions about whether they have the money to sustain a campaign through the first primary contests.

Earlier this week, Kamala Harris, another candidate who entered the race to much fanfare, announced she was downscaling her campaign, laying off some staffers and reorienting almost exclusively to focus on Iowa.

O'Rourke entered the race as the feel-good, dynamic candidate who had the ability to appeal to both Republicans and Democrats and work across the aisle in Washington. But he immediately faced criticism that he had a sense of entitlement, particularly after the release of a Vanity Fair interview on the eve of his campaign launch in which he appeared to say he was "born" to be in presidential politics.

After quickly pulling in $9.4 million during his first two weeks in the race, O'Rourke's financial situation deteriorated. By the end of June, he was spending more than his campaign was taking in. By the end of September, he had just $3.2 million cash on hand while spending double that over the previous three months, campaign finance records show.

Perhaps more significantly, the small-dollar contributions that fueled his Senate bid and the early days of his presidential campaign slowed to a $1.9 million trickle.

The former congressman also struggled to articulate a consistent vision and messaging as a presidential candidate.

He spent several weeks trying to build his campaign around climate change, calling global warming the greatest existential threat the country had ever faced. But as the excitement over his candidacy began to fade, O'Rourke was forced to stage a "reintroduction" of his campaign to reinvigorate it. After a gunman opened fire at a Walmart in his hometown of El Paso, killing 22 people, O'Rourke more heavily embraced gun control, saying he would take assault weapons away from existing owners.

As O'Rourke's standing in the presidential primary plummeted, some Democrats urged him to return to Texas for another Senate run. He has repeatedly denied having any interest in that race.

O'Rourke's decision came hours before he was supposed to join other Democratic contenders at a party dinner in Iowa. Campaign volunteers were still collecting voter information and handing out "Beto" stickers" outside the event amid a steady rain as the candidate announced he was dropping out.

O'Rourke did not endorse another Democrat for the nomination, saying the country will be well served by any of the other candidates, "and I'm going to be proud to support whoever that nominee is."

President Donald Trump quickly weighed in on O'Rourke's exit, saying in a tweet: "Oh no, Beto just dropped out of race for President despite him saying he was "born for this." I don't think so!"