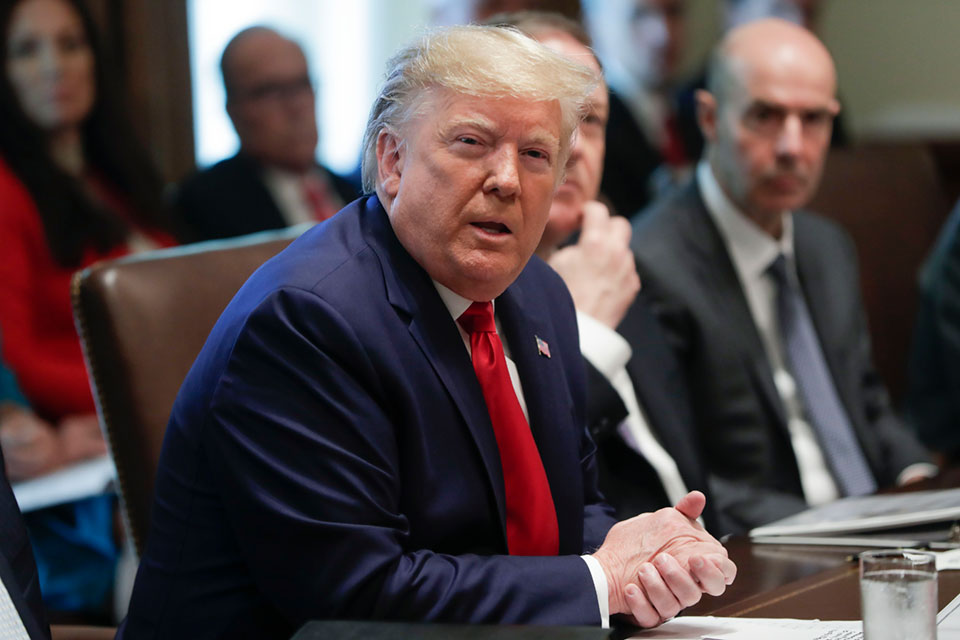 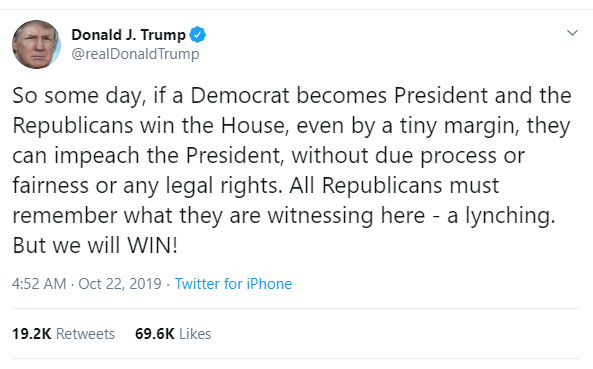 Screenshot of Donald Trump's Tweet which has generated more than 70,000 likes in less than 5 hours.WASHINGTON (AP) — Stirring up painful memories of America's racist past, President Donald Trump on Tuesday compared the Democratic-led impeachment inquiry to a lynching, a practice once widespread across the South in which angry mobs killed thousands of Black people.

The use of such inflammatory imagery to lash out at the House investigation into Trump's dealings with Ukraine triggered an outcry from Democratic legislators, some mild rebukes but also some agreement from the president's Republican allies and condemnation from outside the Washington Beltway.

A woman whose father was killed by Ku Klux Klansmen in Alabama in 1957 called the comment "unbelievable."

Trump has spent recent days pressuring Republicans to give him stronger support in countering the impeachment investigation.

His tweeted suggestion that they "remember what they are witnessing here — a lynching" came a day after Trump said the GOP needs to "get tougher and fight" against the fast-moving inquiry into whether he tried to withhold U.S. military aid until Ukraine's government agreed to investigate Democrat Joe Biden and his son.

The White House said later Tuesday that Trump was not comparing impeachment to "one of the darkest moments in American history." Spokesman Hogan Gidley said Trump sent the tweet to point out what he feels is his continued mistreatment by the news media.

Trump, who has been complaining about unfairness in the impeachment process being led by House Democrats began his tweet: "So some day, if a Democrat becomes President and the Republicans win the House, even by a tiny margin, they can impeach the President, without due process or fairness or any legal rights."

It was the latest instance in which Trump has tried to advance his political interests by unleashing racially inflammatory language.

Over the summer, he told four Democratic congresswomen of color to go back to their "broken and crime-infested" countries, although the four are U.S. citizens. Earlier in his presidency, Trump unleashed a firestorm by saying there were "very fine people" on both sides of a 2017 White supremacist rally and counter-protest in Charlottesville, Virginia, that resulted in the death of an anti-racism demonstrator.

The reference to a lynching struck a deep, painful chord for Black people whose relatives died in racially motivated killings.

Malinda Edwards, whose father was forced to jump off an Alabama river bridge in 1957 by Klansmen who heard that he had smiled at a White woman, said Trump was making light of the horror experienced by victims.

"Either he's very ignorant or very insensitive or very racist and just doesn't care," Edwards, 66, of Dayton, Ohio, said of the president. Her father's name is now among those on a memorial in Montgomery, Alabama, honoring more than 4,000 lynching victims.

Janet Langhart Cohen told The Associated Press that Trump is among too many Whites who have disrespected lynching victims and their descendants. Her distant cousin, Jimmy Gillenwaters, was lynched in Kentucky in the early 1900s.

Trump "knows what he's doing. He knows how to hurt and divide," Cohen, the wife of former Republican Sen. William Cohen of Maine, told The Associated Press.

Lynching is a reprehensible stain on this nation's history, as is this President. We'll never erase the pain and trauma of lynching, and to invoke that torture to whitewash your own corruption is disgraceful. https://t.co/XOlsazwwRL

Bernice King, a daughter of the Rev. Martin Luther King Jr., tweeted that Trump's comparison "is a reflection of the very real trajectory of our nation and the very repugnant evil of racism, which still permeates both legislation and language in the United States."

Former Maryland Lt. Gov. Michael Steele, a Black Republican, went a step further by tweeting a graphic black-and-white photo of a Black man hanging from a tree and said: "This is a lynching. Trump this is not happening to you and it's pathetic that you act like you're such a victim."

Trump's closest Republican backers in Congress agreed with him, though others rejected his comparison.

"This is a lynching in every sense," said Sen. Lindsey Graham, R-S.C., who is close to Trump.

Democrats expressed outrage that Trump would equate impeachment to a lynching and called on him to delete the tweet or apologize.

"That is one word no president ought to apply to himself," said Democratic Rep. James Clyburn of South Carolina, the highest-ranking African American in Congress. "That is a word that we ought to be very, very careful about using."

Sen. Doug Jones, D-Ala., tweeted to Trump: "No sir! No, @realDonaldTrump: this is NOT a lynching, and shame on you for invoking such a horrific act that was used as a weapon to terrorize and murder African Americans."

The Congressional Black Caucus encouraged Trump to visit the National Memorial for Peace and Justice in Montgomery, also known as the "Lynching Museum."

Trump often tries to portray himself as the victim of any controversy he is embroiled in. His tweet came one day after he lashed out at critics of his now-rescinded plan to schedule a major international summit for 2020 at one of his own properties in Florida.

He complained about people who invoke the "phony emoluments clause" — a section in the Constitution that forbids presidents from receiving gifts or payments from foreign governments without the consent of Congress. The impeachment process is also in the Constitution.

An anonymous whistleblower's complaint that Trump was attempting to use his office for personal political gain during a July 25 phone conversation with Ukraine's president led House Speaker Nancy Pelosi to open the impeachment inquiry.

Trump insists he did nothing wrong, characterizing the conversation with Ukrainian President Volodymyr Zelenskiy as "perfect" and arguing that sore-loser Democrats are still trying to overturn his 2016 election and deny him reelection next year.

Separately Tuesday, a U.S. appeals court in Atlanta was considering whether federal judges can order grand jury records unsealed in the mob lynching of two Black couples. The young Black sharecroppers were stopped along a rural road in 1946 by a White mob that dragged them out and shot them multiple times east of Atlanta. More than 100 people reportedly testified before a grand jury, but no one was ever indicted in the deaths of Roger and Dorothy Malcom and George and Mae Murray Dorsey.

This story has been updated to include additional reactions.