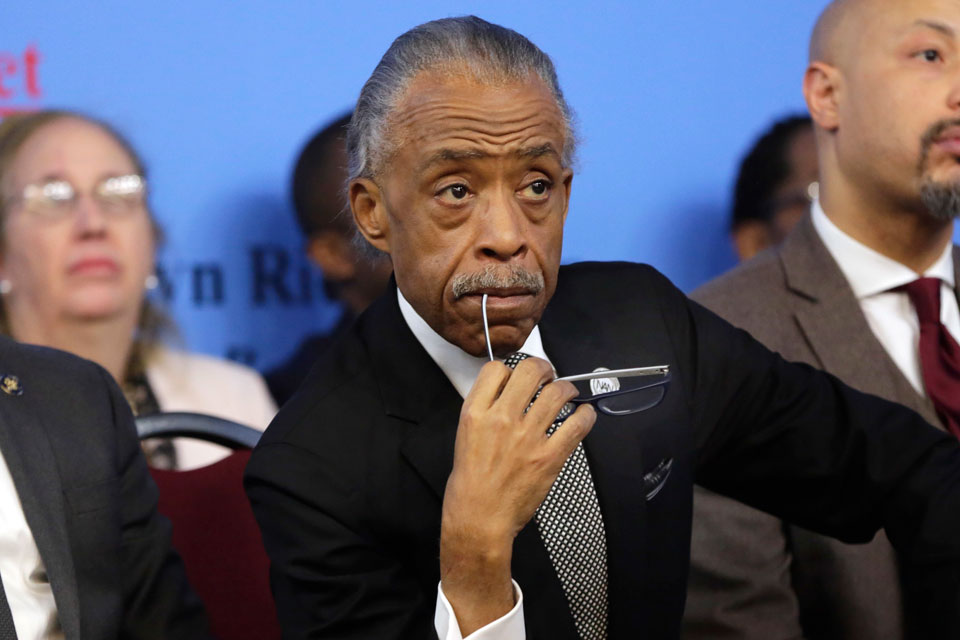 A life taken at the hands of police. A grieving family. A divided nation. A stirring eulogy by the Rev. Al Sharpton.

The 65-year-old civil rights activist has become a constant of the Black Lives Matter era with his presence in the pulpit after police shootings of African Americans, showing up in cities like Baltimore, Sacramento and Ferguson, Missouri to comfort loved ones and call for justice.

The scene had been set to unfold again, with Sharpton preparing to deliver remarks at a service for Atatiana Jefferson, who was playing video games with her 8-year-old nephew when she was killed by a White Fort Worth, Texas, police officer. Saturday's service was canceled amid a family dispute over the funeral arrangements.

In an interview earlier in the week, Sharpton told The Associated Press that he was searching for the words to soothe — and to galvanize.

"I try to frame a message that, as a minister, gives some comfort and meaning to the family," Sharpton said. "Whether it was 30 years ago, or whether it's Saturday, this is somebody's child, this is somebody's sister, brother. At the same time, it is opening a scar in Black America that makes us all feel vulnerable."

The head of the National Action Network, MSNBC host and Baptist preacher has delivered dozens of eulogies over his long career, including for celebrities like Michael Jackson and James Brown, but it's the police shooting funerals that have taken on the greatest poignancy. As the cycle repeats itself on social media and on cable television, through headlines and hashtags, a drumbeat of grief and death, Sharpton delivers more than just a speech to a grieving congregation — he offers his words as a balm for all of Black America.

"His presence brings the attention that is needed for an America that keeps saying we don't have an issue," said attorney Benjamin Crump, who has represented several Black families whose loved ones were killed by police in recent years. "He brings his influence, his platform, his national audience with him when he comes into that church to eulogize those people."

At the center of Sharpton's work is his faith.

"God calls on some people to build big churches," he said.

"I believe my calling is to help those that go through this, and if my being there and words and whatever kind of notoriety I can bring helps them, then that's what I'm supposed to do."

Sharpton's ministering of families doesn't end after a family's loved ones are buried. Two decades after Amadou Diallo was shot by New York City police officers who mistook him for a rape suspect, Sharpton still calls Diallo's mom on Mother's Day. He does the same for many others, including Gwen Carr, whose son Eric Garner's chokehold death gained attention largely because of Sharpton's efforts.

Carr noted Sharpton paid for her son's funeral. She has since lost a daughter and her husband, and Sharpton has shown up every time.

"A lot of people in his position, after everything was over, after the lights of the cameras go out, they go on to the next story, they forget about you," she said. "He's not like that."

While many cases come to Sharpton's attention through attorneys or local clergy and activists, he never comes where he isn't called, and won't do anything he isn't asked.

"Somebody has called him to help because they can't get justice, because people are not listening to them," said Sybrina Fulton, whose son Trayvon Martin was killed by a neighborhood watch volunteer in Sanford, Florida, in 2012.

She recalled the time Sharpton missed his mother's funeral to attend a rally for her son. "He said, 'This is what my mom would want me to do,'" Fulton said.

Still, the work does take a toll.

"Some of the worst nights of my life are the nights after I speak at a funeral of somebody that I don't think should've been dead," Sharpton said. "Emotionally, it's very, very draining. It's almost depressing psychologically."

Among the deaths that still haunt him is that of Ramarley Graham. Graham's grandmother and then-6-year-old brother were witnesses when a New York City police officer killed the 18-year-old in his grandmother's bathroom in the Bronx in 2012.

As he delivered Graham's eulogy, Sharpton's eyes were trained on the younger brother.

"It took all I had to try to find something to say that we still have to struggle on, we still have to fight on, we can't give up," Sharpton recalled. "But I kept looking at that little boy — who, you could tell looking in his eyes, he just couldn't understand how this could happen."

Then there was the time he accompanied Diallo's family back to Guinea to bury him.

"How do you explain to Africans in the middle of the bush why this guy was killed?" Sharpton said.

Before Sharpton spoke at the funeral of Stephon Clark in Sacramento, California, last year, he called Clark's brother, Stevante, on stage. As the emotional young man bounded to the front of the church, Sharpton began the call-and-response protest chant: "I am!"

Crump recalled the scene as masterful.

"I don't know any other preacher who could have delivered that eulogy with dignity, with a brother having a crisis right there in the pulpit with him," said Crump.

His goal for such funerals: Try to process what happened and the need for justice, but also think of the person who was killed, who she was, what she was about, what made her unique. Steer people who may be enraged away from actions that could desecrate the memory of the deceased.

In some ways, Jefferson's death feels more personal for Sharpton, a new grandfather and the father of two daughters not much older than Jefferson.

"I can't even tell my daughters to go home and be safe, when a 28-year-old woman babysitting her nephew loses her life," he said. "That's what I'm thinking about: How you make sense out of that and where do we go from here?"

Errin Haines is national writer on race and ethnicity for The Associated Press. Follow her work on Twitter.