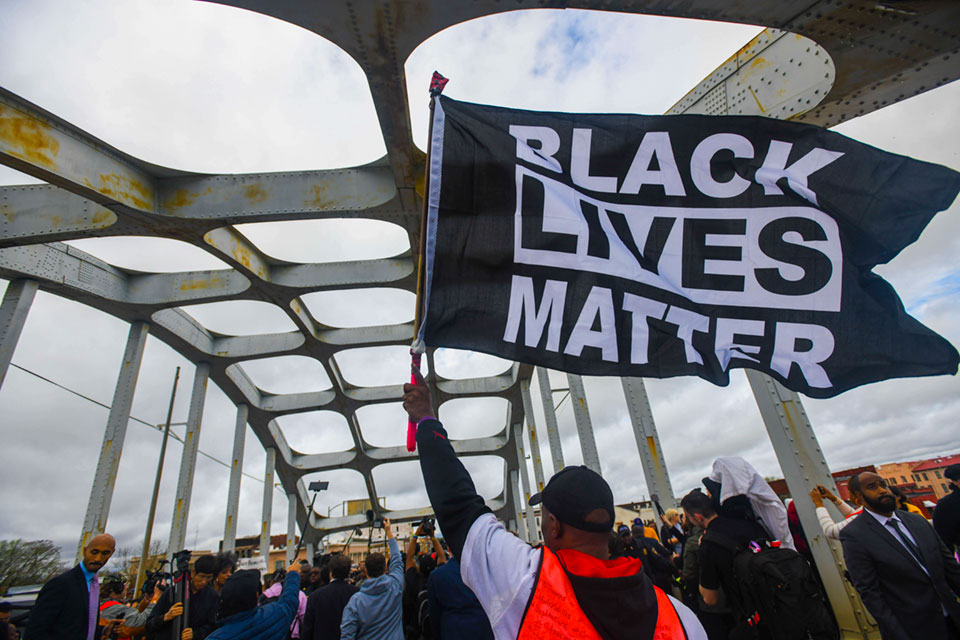 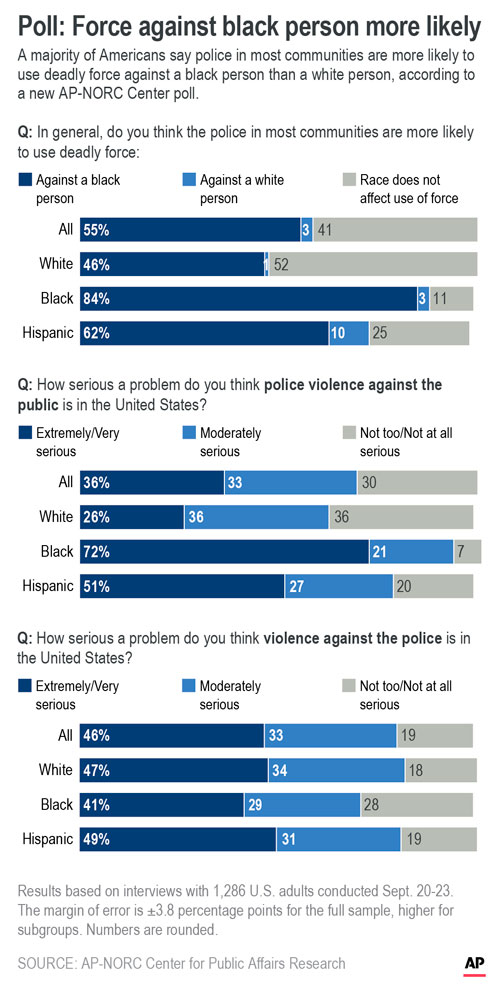 Majorities of Americans across racial lines say White people are treated more fairly than Black people by the police, according to a new poll from The Associated Press-NORC Center for Public Affairs Research.

But the poll finds a disconnect between White Americans who identify disparate treatment of people of color by the police, but who don’t see police violence as a serious problem -- a contrast on display this week as many Black Americans welcomed the guilty verdict against former Dallas officer Amber Guyger as a singular victory, rather than proof of changing attitudes.

About 7 in 10 Black Americans, and about half of Hispanics, call police violence against the public very serious, compared with about a quarter of White Americans. Roughly another third of White Americans call it a moderately serious problem.

The dynamic has played out in the wake of the Black Lives Matter movement, which began in 2014 with the fatal shooting of unarmed 18-year-old Michael Brown by White, former Ferguson, Missouri, police officer Darren Wilson.

The work of activists around the issue of policing in communities of color has helped to raise awareness, said poll respondent Warren Miller, a 62-year-old realtor living in Fairview, Michigan, who said his Black friends helped him realize that White people are treated more fairly by police.

But Miller, who is White, also said he doesn’t believe police violence against the public is a serious problem. Asked why, he laughed nervously before responding: “In northern Michigan, we don’t have as many problems, the city issues. It’s small town America, where everybody knows everybody. That could’ve influenced part of my perception as well.”

“White folks are trying to grapple with the difference between what they want to and need to believe about their country, and what their eyes increasingly are telling them is true,” said anti-racist author and educator Tim Wise, adding that for many Black and Brown Americans, the notion that racism is systemic and not limited to individual instances is easier to accept “because it’s their lived experience.”

“For White folks, there’s a need to hold on to the myth that America is an equal justice kind of place,” said Wise, who is White.

“People of color have never had to, nor have they ever been able to, buy into the fiction of liberty and justice for all.”

But the poll also finds 55% of Americans say they think police in most communities are more likely to use deadly force against a Black person compared with a White person.

“I think there’s a misconception that Black citizens are inherently more dangerous or more likely to react violently to a police encounter,” said Gabe Wood, 49, of Wilmington, North Carolina.

The Democrat, who is White, cited “a laundry list of issues that go back a long time” like stereotypes about different races and the threats they present.

“I do think in some areas of the country and some parts of towns, I think police officers are quicker to resort to deadly force because of a perceived and sometimes unreal threat,” Wood said.

Guyger’s trial was the latest in a string of high-profile cases in recent years in cities including Baltimore, Cleveland and Minneapolis, as well as Baton Rouge, Louisiana, and North Charleston, South Carolina, to highlight the issue of disparate policing in communities of color.

Guyger, a 31-year-old White former officer, was convicted Tuesday of murder in the killing of 26-year-old accountant Botham Jean after apparently entering his home by mistake and concluding that he was an intruder. She was sentenced Wednesday to 10 years in prison.

Some observers cited the rare circumstances of the case as a factor in the rare outcome, as officer-involved shootings of unarmed Black people are sometimes prosecuted, but often result in acquittals.

Others will point to the guilty verdict as evidence of progress, said Georgetown University law professor and former federal prosecutor Paul Butler.

“People’s understandings about the police are going to be based on their own experiences with the police,” Butler said. “The more typical case is when the officer is on-duty and the victim is not as sympathetic, and the officer is seen by many White folks as ‘just trying to do his job.’ We’re still a long way from equal justice under the law.”

The AP-NORC poll of 1,286 adults was conducted Sept. 20-23 using a sample drawn from NORC's probability-based AmeriSpeak Panel, which is designed to be representative of the U.S. population. The margin of sampling error for all respondents is plus or minus 3.8 percentage points. Respondents were first selected randomly using address-based sampling methods and later were interviewed online or by phone.