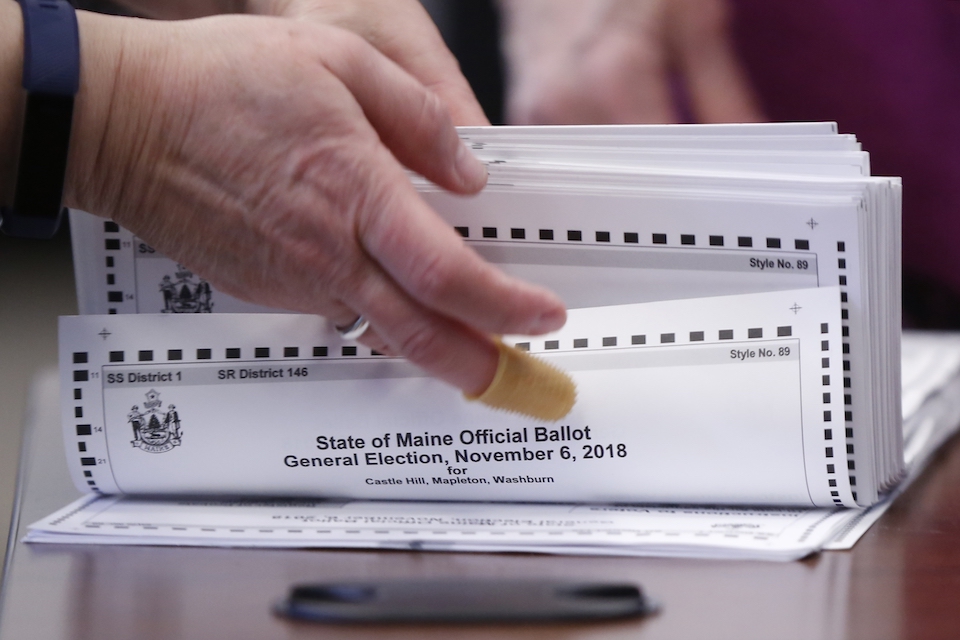 PORTLAND, Maine (AP) — Maine moved ahead Friday with plans to become the first state to allow voters to rank candidates in a general presidential election.

Gov. Janet Mills, a Democrat, said she'll allow a bill to become law in January without her signature. The legislation requires ranked choice voting in presidential elections and primaries.

Ranked voting won't be used in a planned presidential primary in March 2020, Mills' office said. The bill won't go into effect until 90 days after the Legislature is set to adjourn in April.

But future presidential primaries would use ranked choice voting, according to the governor's office.

Maine voters in 2016 approved ranked voting, but the system was limited to federal races and primaries.

Under the system, voters rank three or more candidates on a ballot in order of preference. If no candidate gets more than 50%, the last-place candidate is eliminated.

The second-choice votes of everyone who ranked that candidate first are allocated until someone receives over 50%.

Supporters of the system who have been trying to spread it to more states cheered the expansion Friday. Such advocates hope the law could boost the influence of an independent and third-party presidential candidate in Maine, one of two states that split their electoral votes, and sway the outcome in a tight race.

About two dozen cities — Including Cambridge, Massachusetts, and St. Paul, Minnesota — allow the use of ranked choice voting in certain elections, according to advocacy group FairVote.

The group says at least a half dozen cities are set to use the system in upcoming elections, while several state Democratic parties, such as in Kansas, plan to use ranked voting in presidential primaries next spring.

"Now Mainers have the option to vote freely for an independent or third-party presidential candidate that best speaks to them and still indicate a backup choice between the major-party candidates," FairVote president and CEO Rob Richie said.

David Farmer, a spokesperson for The Committee for Ranked Choice Voting, said it's "too bad" that Mills didn't sign the bill in to law so voters could rank candidates in the crowded March primary.

The voting method has drawn criticism from opponents who argue the system is too confusing and violates the U.S. Constitution.

Detractors say it's unfair that a candidate who failed to get the most first-place votes can end up winning.

Criticism of ranked choice voting has at times fallen along party lines in Maine, where a Republican congressman waged an unsuccessful legal battle last year against the November election of his Democratic opponent under Maine's then-new voting system.

In December, U.S. District Judge Lance Walker said that critics can question the wisdom of ranked-choice voting, but that such criticism "falls short of constitutional impropriety."

But she also expressed financial and logistical concerns about the legislation, which she said lacked funding and raised questions about how it could affect the selection of convention delegates.

"By not signing this bill now, I am giving the Legislature an opportunity to appropriate funds and to take any other appropriate action in the second regular session to fully implement ranked-choice voting in all aspects of presidential elections as the Legislature sees fit," Mills said.

Mills said that even without the bill, parties could still use "ranked-choice voting or some similar process" when selecting delegates.

Opponents who want to prevent that primary have until Sept. 18 to submit enough signatures. Then, voters in June would have a chance to weigh in on the law approving the change