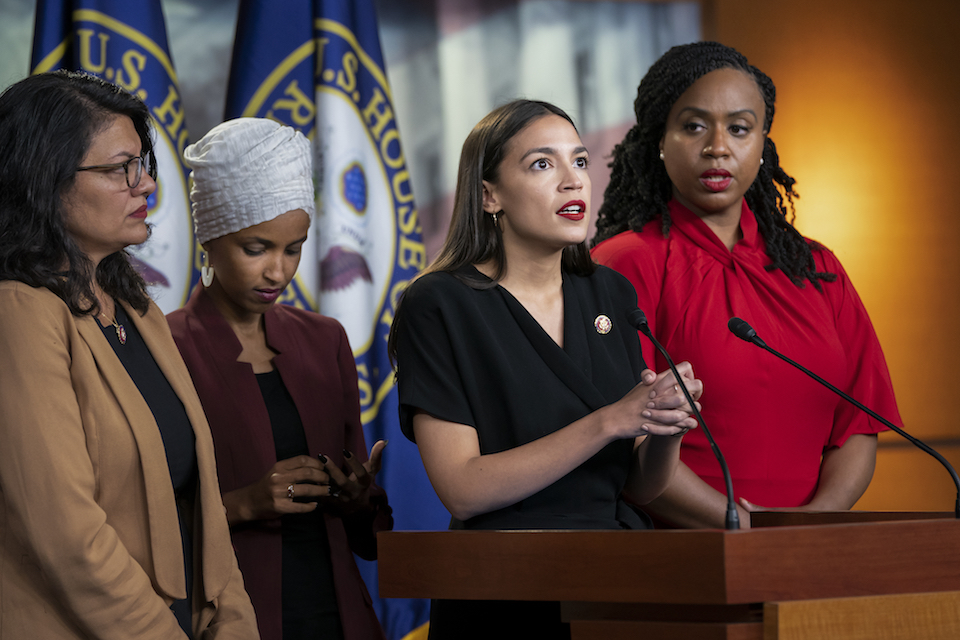 (AP) — Move over, Nancy Pelosi. Rep. Alexandria Ocasio-Cortez and the "squad" of freshmen women of color are emerging as new stars of Republican attacks against Democrats running for Congress.

The tone is being set from the top as President Donald Trump bashes the four squad members with a strategy Republicans are quick to mimic, modeled on his own rise to the White House.

Trump set a new standard in 2016, making some Republicans uneasy, by taunting rivals and branding them with exaggerated nicknames intended to make them unelectable.

The GOP is embracing the tactic for 2020.

Singling out women could backfire

A first test will be a Sept. 10 special election in North Carolina, the state where Trump sparked the "send her back!" rally chant. The Trump-endorsed Republican, Dan Bishop, is portraying Marine veteran Dan McCready and other Democrats as "crazies," ''clowns" and "socialist."

"These crazy liberal clowns ... They're not funny," Bishop says in one ad that features images of McCready, Pelosi and squad members to a soundtrack of circus music. "They're downright scary."

Yet it remains to be seen whether this line of attack will work. For years, Republicans relied on attacks depicting Pelosi, the House speaker, as an out-of-touch San Francisco liberal as they tried to snap GOP voters to attention.

But singling out a new generation of female leaders is risky when Republicans are trying to prevent an exodus of suburban women and independent voters.

The attacks are especially fraught because two of the women — Reps. Rashida Tlaib, D-Mich., and Ilhan Omar, D-Minn. — are the first Muslim women elected to Congress, part of the historic freshmen class with more women and minorities than ever.

The other two members of the self-described squad are Ocasio-Cortez, of New York, and Rep. Ayanna Pressley, D-Mass.

Michael Fauntroy, an associate professor of political science at Howard University, said Republicans down the ballot are taking Trump's cue with thinly veiled attacks on race and religion.

"Beating up on Pelosi isn't such a big deal because she's been around forever," he said. "This 'squad' is perceived as a new threat and it's this perfect collection of religion, race and policy position, all tied up in a neat little bow, if you will."

It's not just the North Carolina election where Republican candidates are running against the squad.

A Minnesota Republican warned voters off the squad and its home-state representative, Omar, who wears a headscarf, as he launched his campaign to unseat Democratic Sen. Tina Smith.

And Republican strategists are trying to link other Democrats to the group's liberal agenda by branding it "socialist," even if the candidates have not signed on to the Green New Deal, Medicare for All and other liberal proposals favored by the four freshmen lawmakers.

"We will make every Democrat own de facto Speaker Alexandria Ocasio-Cortez's socialist agenda," said Bob Salera, a spokesman for the National Republican Congressional Committee. "And if a member isn't for it, what are they doing to stop it?"

Republican strategists believe the squad, like Pelosi, will provide a powerful focal point for attacks. Ocasio-Cortez is a recognizable name among voters — higher than some presidential candidates — and not all favorable, they say.

The Congressional Leadership Fund, the main outside group aligned with House Republicans, is calling out freshmen Democratic lawmakers they say are "as woke" as Ocasio-Cortez and "palling around" with the New Yorker widely known as AOC.

What Republicans don't want is a repeat of the Trump rally last month in Greenville, N.C., when the president endorsed Bishop on stage but also went after the women one by one, sparking chants of "send her back!" when he got to Omar, who is a Somali refugee.

All are U.S. citizens.

"It's no longer a dog whistle, it's a bullhorn," said Waleed Shahid, a spokesman for Justice Democrats, a group backing the squad.

Republicans acknowledge the risk of taking the rhetoric too far and are trying to keep the barbs focused on policy rather than personalities. They target their liberal policies and criticism of Israel, particularly its treatment of Palestinians.

One Republican strategist said the GOP only expects to use the message in about 13 key House districts where Trump easily won in 2016, rather than more competitive suburban districts that have been trending toward Democrats in recent elections. The strategist was granted anonymity to discuss the internal deliberations.

Ann Gibson, 74-year-old retiree from suburban Charlotte, said Trump's focus on the first-year Democratic women is part of a larger tendency of constantly looking for enemies.

"I think he's a sexist and racist and I think he needs somebody to rage at and that's this squad," said Gibson, a registered Democrat who voted early for McCready. "Everything that he stands for is just, I'm tired. I'm tired of him, I'm tired of the stuff that goes on every day. ... Just the whole thing."

But Republican Denise Shirhall, 65, said she didn't like the squad's directness or the Democratic establishment's tolerance of the women, which she attributed to their being members of minority groups — "because they're Muslim, this and that."

"They're running amok," Shirhall said outside an early voting site in the Charlotte suburb of Matthews. "If they were my kids, I'd pop their hand."

Treating attacks as a badge of pride

Both parties now say the North Carolina contest is a toss-up. In a district Trump swept in 2016, the tight race is raising questions about whether the attacks will resonate during the 2020 presidential campaign.

Trump, who's making a return visit to North Carolina on the eve of the election, shows few signs of changing course, tweeting that McCready "likes the 'Squad' more than North Carolina."

Pelosi, who appears with cameos in the GOP ads, frequently expresses pride at the more than 130,000 attack ads run against her in 2018. Despite those ads, Democrats won control of the House and she regained the speaker's gavel after six years of GOP rule.

Ocasio-Cortez appears to be taking a similar approach, finding humor in the broadsides against her.

"I love everything about this GOP attack ad," she tweeted about one ad labeled "shallow thoughts" that shows her discussing climate change.

Republicans, she ribbed, are "paying for ads that spread & explain our policy positions."