Too Old for President? Health and Fitness a Better Question 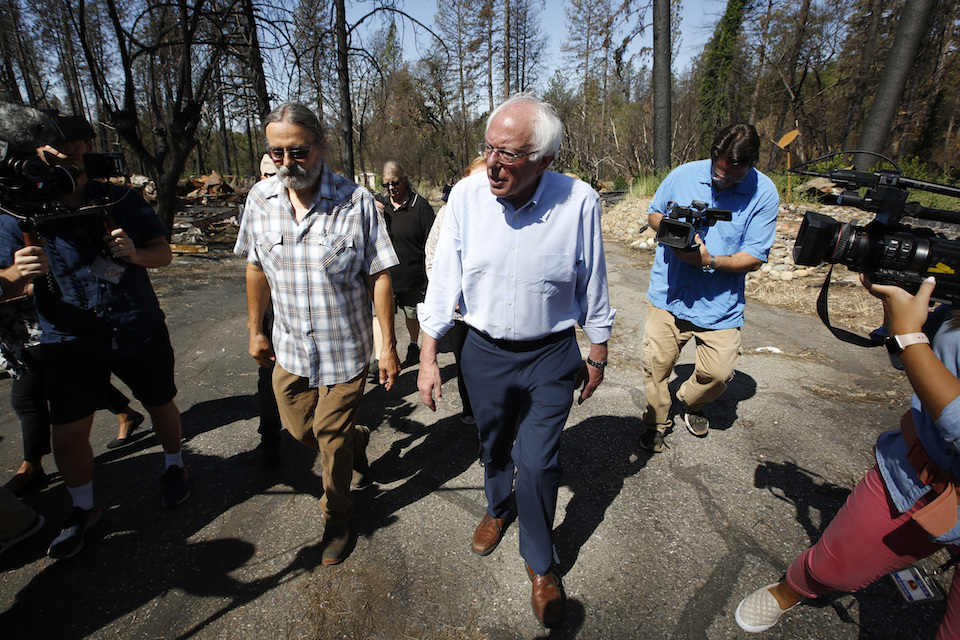 (AP) — Science says age is only a number, not a proxy for physical and mental fitness. But with three Democrats in their 70s vying to challenge the oldest first-term president in American history, age's importance will be tested as never before.

Only a few years separate President Donald Trump, 73, from Vermont Sen. Bernie Sanders, 77, and former Vice President Joe Biden, 76. But as Trump mocks Biden for verbal missteps, suggesting age has slowed his Democratic rival, both Sanders and Biden have conspicuously showcased their physical activity during the campaign.

While the risks of disease and death rise substantially in the 70s and beyond, many specialists caution that the age on your driver's license means far less than how healthy you are and how well you function — what's sometimes called your "biologic age."

"I'm not going to sugarcoat aging," said well-known aging researcher S. Jay Olshansky of the University of Illinois at Chicago. But, he added, "how many times they've traveled around the sun should not be a litmus test for the presidency."

Still, it's not straightforward to figure out just how fit these septuagenarians — or any candidates — really are. No law requires them to disclose their medical records. A doctor's note or some test results may reveal snippets. Those shed little light on one of the biggest questions about aging leaders: How likely is their memory or overall mental acuity to decline?

After all, many neuroscientists question if President Ronald Reagan, 73 when re-elected, showed signs of cognitive trouble during his second term. He was diagnosed with Alzheimer's years after leaving office.

Checkups do offer a clue.

"A healthier heart, for example, is going to translate to a healthier brain," said Dr. Anne Newman, who directs the University of Pittsburgh Center for Aging and Population Health.

Likewise some habits are critical: a good diet, exercise and enough sleep. Trump, a fast-food fan and late-night tweeter who doesn't exercise regularly, has scoffed at that advice. Still, his doctor earlier this year said he's overall in good health despite needing to lose weight and stick with cholesterol-lowering medicine.

But there's no easy predictor.

"You can have a group of people who at age 80 are still going to work every day, doing all the stuff they need to do," Newman said. "We're not very good at understanding who's going to be able to tolerate the stress in emergency situations," like the 3 a.m. crises presidents so often must navigate. 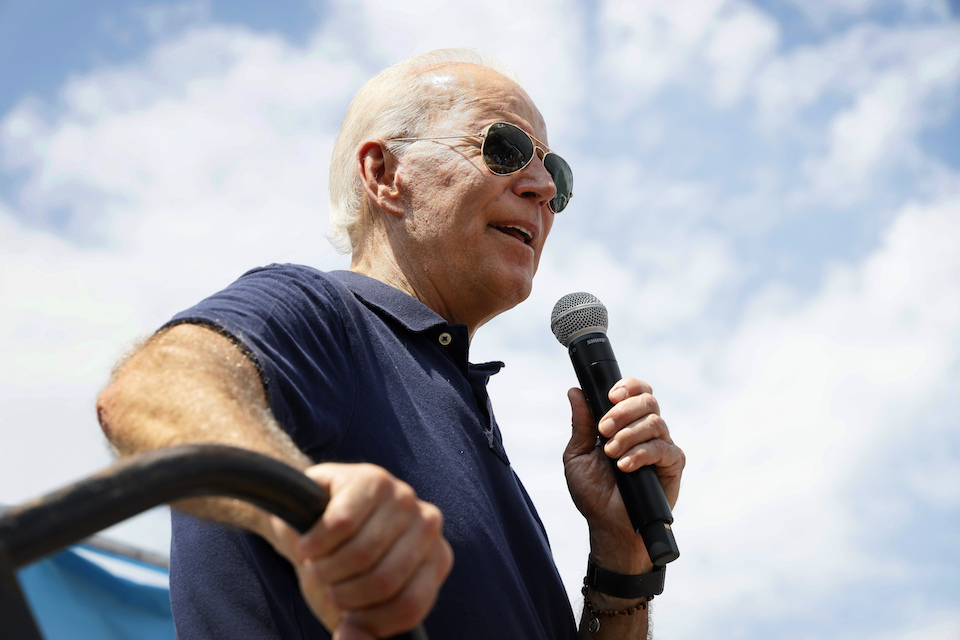 Democratic presidential candidate former Vice President Joe Biden speaks at the Des Moines Register Soapbox during a visit to the Iowa State Fair in Des Moines, Iowa, Aug. 8, 2019. Three Democrats in their 70s are vying to challenge the oldest first-term president in U.S. history. But science says age isn’t a proxy for fitness. The bigger question is how healthy you are and how well you function.

Some experts have called for independent health exams for presidents and candidates of all ages, much like the fit-for-flight physicals that pilots undergo. To Newman, the grueling endurance contest that is a U.S. presidential campaign is a pretty good substitute.

"For most people who go through that kind of a rigorous schedule, chances are they're going to be healthy for at least five if not 10 years," she said.

That hasn't stopped age, and a call for generational change, from affecting past elections.

Sen. John McCain, R-Ariz., faced questions about his fitness when seeking the presidency in 2008 at age 71 against then-Sen. Barack Obama, D-Ill., nearly 25 years his junior. During his 1984 re-election bid, Reagan famously promised not to take advantage of 56-year-old Democratic foe Walter Mondale's "youth and inexperience."

Sanders told The Associated Press that voters "must and will judge candidates in terms of the totality of their being," including their experience and records as well as their ages.

"I am very happy — well, I am lucky, I suppose — to tell you that I am in good health and have a great deal of endurance, and I would not have run for this job as president of the United States unless I thought I was absolutely, 100% physically able to do it," he said in an interview during a recent campaign swing through South Carolina.

Two days later, Sanders was in Iowa tossing some pitches in a campaign-sponsored softball game and taking his turn at bat. Warren spent the week hopscotching from South Carolina to Iowa to Minnesota to California, an itinerary that might weary someone half her age, while Biden went from Massachusetts to Iowa.

Biden had a brush with death in 1988, requiring surgery to repair two brain aneurysms — weak bulges in arteries, one of them leaking. Medical records released in 2008 during Biden's vice presidential campaign showed he'd made a full recovery with no trouble since.

Dr. Kevin O'Connor, who has treated Biden since he served as vice president, said in a statement provided by the campaign that Biden is "in excellent physical condition" and "more than capable of handling the rigors of the campaign."

The stress of the Oval Office doesn't shorten presidents' lives, Olshansky reported in a 2011 study . Curious at the attention paid to Obama's graying hair, Olshansky found that 23 of 34 presidents who had died of natural causes lived beyond the average life expectancy of men the same age when they were inaugurated. 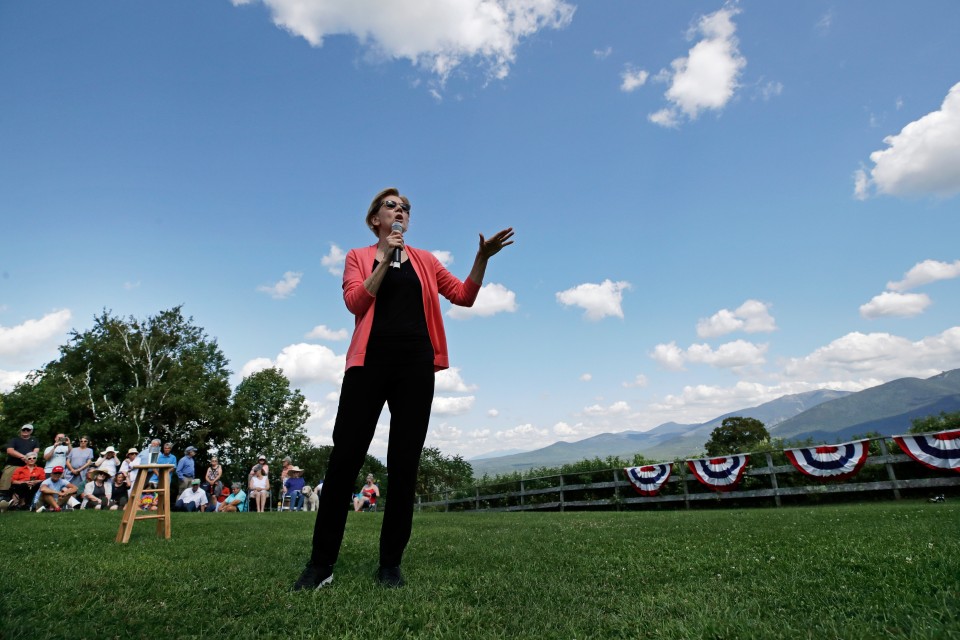 What about the 2020 candidates? Olshansky used life insurance statistics to calculate average life expectancies of U.S. citizens of the same gender and age at inauguration as each candidate.

Not surprisingly, 37-year-old Pete Buttigieg, the youngest of the candidate crop, should have the most years ahead of him.

But by Olshansky's calculations, the 70-somethings also would have great odds of surviving in office. Based on the average for their age, that's a 76.8% chance for Sanders; 79.2% for Biden; 84.8% for Trump and, reflecting that women tend to outlive men, a 91.8% chance for Warren.

And the candidates' survival odds likely are even higher, Olshansky said, because people who are wealthy, well-educated and have good health care tend to live longer than average. (In addition to the campaign's four higher-polling senior citizens, the president's longshot GOP primary challenger Bill Weld is 74.)

Of course, that's assuming no candidate has a worrisome illness that hasn't come to light. Presidents of all ages have proved pretty adept at hiding frailty. Woodrow Wilson had a secret stroke. Franklin D. Roosevelt's doctors concealed his heart disease and shockingly high blood pressure. Only years after his assassination did the public learn how the seemingly vibrant John F. Kennedy struggled with chronic pain and a list of health problems.

When it comes to brain health, even normal aging can bring a slowing of certain functions such as retrieving memories. Trump has targeted Biden's career-long penchant for verbal gaffes, such as when Biden recently compared "poor kids" with "white kids." Trump later questioned whether Biden is "mentally fit to be president," an ironic dig given the president's own slips and lack of verbal finesse.

Stumbling in speeches, especially given how politicians' every word is scrutinized, isn't surprising, Olshansky said: "Mistakes happen whether you're 35 or 75."

It's true that advancing age is a risk for Alzheimer's, which affects about 3% of people ages 65 to 74 and 17% of those 75 to 84. But Olshansky is watching for a president's ability to think and reason clearly and focus on the big picture, something that can improve with age-infused experience.

Trump did request a memory test at his first White House physical, and his doctor said he aced it. But Newman cautioned that "anybody running for president is not going to do badly" on that simple test. It takes specialists hours to perform the more complex testing required to detect subtle problems, tests that must be repeated to spot any decline.

It's not clear how much health information candidates of any age will release this time around.

But doctor reports and medical records are a snapshot, not a crystal ball.

McCain released more than a thousand pages in 2008, seeking to ease concern about previous bouts of melanoma. He died a year ago of a brain tumor those records couldn't predict, although Olshansky notes that McCain would have survived two terms had he been elected. Back in 1992, Paul Tsongas unsuccessfully campaigned for the Democratic nomination as a cancer survivor, with some doctors vouching that he was cured, only to have his lymphoma return shortly after the election.

A June poll by The Associated Press-NORC Center for Public Affairs Research suggests age is a factor for some voters. About one-third of Democratic voters said they would be more excited to vote for a candidate if that person is younger, and about one-quarter would be less excited to vote for one who is older.

One of those voters, retiree Ken Carpenter, bikes 10 miles most days to maintain his health. But the 77-year-old Carpenter said in a recent interview that he's ruled out his contemporaries in the Democratic primary, deeming Biden and Sanders simply too old to handle the demands of the presidency.

"I know that eventually the aging process, something kicks in and you start losing it," Carpenter said on the sidelines of the Iowa State Fair. "That could happen to Joe in six months. Or to Bernie."

Biden himself gave a one-word response in Iowa when asked by a reporter if he would consider making a pledge to serve just one term if it alleviated concerns about his age: "No."