Warren Wows in Iowa as Candidates' Sprint to Caucuses Begins 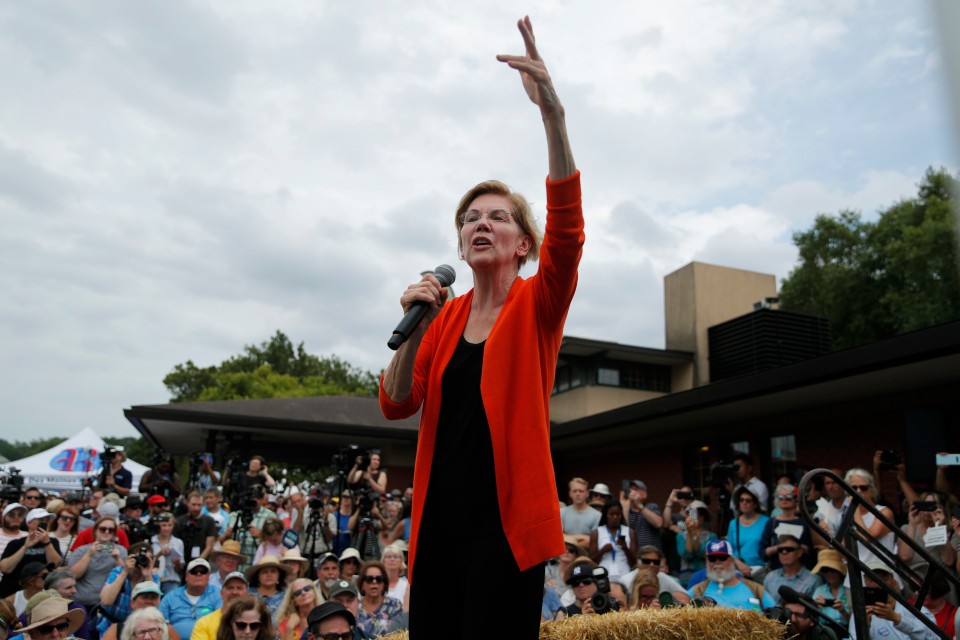 DES MOINES, Iowa (AP) — The chant — "2 cents, 2 cents, 2 cents" — started in the back of a crowd that packed sidewalks at the Iowa State Fair. Elizabeth Warren, basking in the spontaneous adulation of her proposed wealth tax, prompted roars with her call for the ultra-wealthy to "pitch in 2 cents so everybody gets a chance to make it."

A night before, the Massachusetts senator enjoyed similar treatment when Democrats at a party dinner jumped to their feet — some beginning to dance — at the opening bars of Dolly Parton's "9 to 5," the song that would usher Warren on stage.

For someone whose White House ambitions were dismissed by some Democrats earlier this year, Warren's reception in Iowa this weekend was a clear warning sign to other 2020 candidates that hers is a campaign to be reckoned with in the state that kicks off the race for the party's nomination.

Warren was one of nearly two dozen candidates who paraded through Iowa this weekend, speaking at the state fair, the annual Wing Ding dinner and a forum on gun control. The sheer volume of visiting contenders signaled a new phase of the campaign, ending the get-to-know-you period and beginning a six-month sprint to the Iowa caucuses.

In that time, the historically large field will winnow, front-runner Joe Biden will be tested more forcefully and a fierce competition will unfold for candidates to be seen as the more viable alternative. They'll be competing for the support of Democratic voters who say their top priority is to land on a nominee who can defeat President Donald Trump.

As the caucuses near, strategists say Warren's ground-level organization — demonstrated by her large staff and a proven ability to get her supporters to appear at large events like the fair — is fueling her momentum.

"Elizabeth has a super organization and her campaign is hot," said David Axelrod, who helped run former President Barack Obama's winning Iowa campaign. "But we've seen hot candidates before. August is no guarantee of what happens in February."

As Biden maintains a tenuous lead in polls and Warren gains ground, there's time for ascendant candidates Pete Buttigieg and Kamala Harris to get hot. Bernie Sanders, meanwhile, is still in the top-tier with a devoted following.

Biden and Harris have both boosted their investments in Iowa recently. The former vice president now has 75 full-time staffers on the ground and 12 offices throughout the state, a number they're planning to more than double by the caucuses. Harris' team touts 65 staffers and seven offices, and the California senator recently went on the airwaves with an ad focused on her mother and her economic policy.

But Biden's Iowa swing showcased the challenges that lie ahead for him. The visit was marred by a series of gaffes in which he stumbled over his words or seemed to get the dates wrong on major events.

Some longtime Biden supporters worried he's lost some of his spark. Greene County Democratic Party Chair Chris Henning said that, in the past, "I was crazy about him."

"Energy-wise, he looked people in the eye, remembered your name, called your name — and he's not that Joe Biden anymore," she said.

If Biden's worried, he didn't show it in Iowa. With a smile on his face, he strolled through the state fair, stopping for ice cream.

"You're gonna see these numbers go up and down and up and down," Biden said.

"All I can do is try to be as authentic as I can," Biden said.

Harris' five-day Iowa tour marked the longest stretch she's spent in any early voting state. After a slow summer in which she faced questions about her commitment to the state, Harris said her biggest challenge in Iowa is being relatively unknown.

"There are people in this race that have had national profiles for many years," she told reporters. "I'm still introducing myself to people."

Harris impressed her audiences with what retired real estate agent Wendy Ewalt called her "warmth," after they met on the sidewalk outside Juanita's restaurant in Storm Lake.

"She has something intangible," Ewalt said. "She connects."

Buttigieg, the mayor of South Bend, Indiana, and Sanders, a Vermont senator, also remain strong contenders. Sanders has added seasoned staffers to his team and maintains tens of thousands of volunteers and a strong grassroots network of activists who helped him pull off a surprise near-tie in the 2016 caucuses.

Buttigieg, who has distinguished himself in the field as a gay, married man and a 37-year-old girding for generational change in politics, drew large crowds and began courting Iowans more aggressively in July. He raised an impressive $25 million during the second quarter, which has helped him bring 60 new staff members to Iowa in the past two weeks. His campaign manager, Mike Schmuhl, recently spent four days in Iowa with him and held private meetings with staffers and key Democrats, as his team works to build up their operation in the state.

Buttigieg drew one of the biggest responses at the Wing Ding dinner, and he'll have the media spotlight largely to himself when he returns this week for a three-day trip through eastern Iowa counties where Trump won in 2016.

Jeff Link, a veteran Democratic campaign adviser known best for his work for former Sen. Tom Harkin, noted of Buttigieg and Harris that "it seems they are a little more focused on Iowa than maybe they were in the first half of the year."

But, he added, "The only thing that matters is the fourth quarter."

The caucuses are famous for their unpredictability. In the fall of 2007, when trailing Hillary Clinton, Obama drew crowds of tens of thousands to college campuses and gave a scorching speech obliquely attacking his rival as too careful. He later notched a historic victory that propelled him to the White House.

Similarly, after leading Iowa into the late summer of 2003, Howard Dean came under attack for a reputation of being angry and untested on the national scene. Following a campaign makeover that fall, John Kerry surged early in 2004 and won the caucuses on his way to the nomination.

Beto O'Rourke, a former Texas congressman, is counting on that kind of scenario to lift his struggling campaign. He has dozens of staffers on the ground, 11 field offices and cash stocked away if he can break through the crowded field.

Should Harris or Buttigieg flop, there is time for Cory Booker or Amy Klobuchar to catch on. Booker, a New Jersey senator, wowed Democrats with his fiery speech at the Wing Ding dinner and has a strong Iowa operation. Klobuchar, a senator from neighboring Minnesota, has played up her Midwestern roots.

"The big unknown is whether folks drop out and endorse remaining candidates. That could change things dramatically."