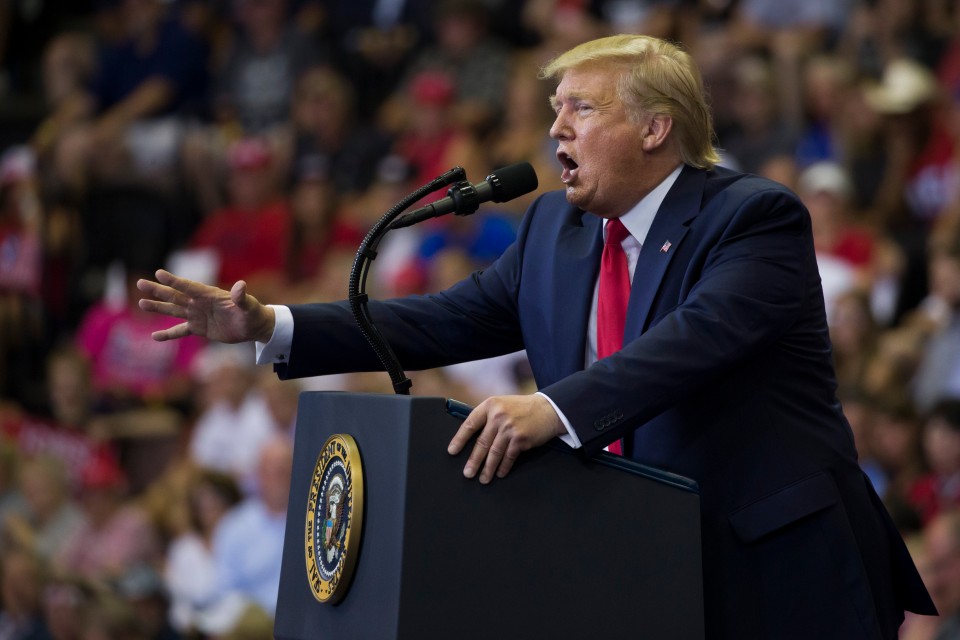 CINCINNATI (AP) — President Donald Trump used a revved-up rally in Cincinnati to tear into the Democrats he has been elevating as his new political foils, attacking four liberal congresswomen of color and their party's urban leaders, while also directing fire at those he could be facing in 2020.

But the president mostly avoided the racial controversy that has dominated recent weeks as he basked in front of the raucous crowd Thursday for nearly 90 minutes, unleashing broadside after broadside on his political foes. Trump, who had faced widespread criticism for not doing more to stop the chants of "Send her back" about Somali-born Rep. Ilhan Omar at a rally last month, seemed to want to avoid further furor, saying ahead of the rally that he would prefer his supporters avoid the chant. He largely stuck to a greatest hits performance.

But while he did not mention Omar or her three colleagues by name in the opening moments of his Ohio gathering, the target of his attacks was unmistakable.

"The Democrat party is now being led by four left-wing extremists who reject everything that we hold dear," Trump said of Omar and her fellow House Democrats Alexandria Ocasio-Cortez of New York, Rashida Tlaib of Michigan and Ayanna Pressley of Massachusetts.

But the fleeting mention did not lead to further chants. Nor did an extended attack on Democratic leaders of urban areas, which Trump has laced into in recent days as part of his incendiary broadsides against Rep. Elijah Cummings and the majority-Black city of Baltimore.

The rally was the first for Trump since the "Send her back" chant at a North Carolina rally was denounced by Democrats and unnerved Republicans fearful of a presidential campaign fought on racial lines.

In the early moments of Thursday's rally, Trump declared, "I don't want to be controversial." He mostly stuck to it.

Trump's Review of the Democratic Debates

With the eyes of the political world shifting from two days of Democratic debates to see if Trump would stoke racial anger, the president largely delivered his standard stump speech. But Trump, the most avid cable news viewer in the history of the office, could not resist delivering his review of the Detroit debates.

He mocked some of the leading Democratic contenders, reviving his nickname of "Sleepy" for Joe Biden, teasing Elizabeth Warren for claiming some Native American heritage and lashing the Democrats for their health care and immigration proposals.

"The Democrats have never been so far outside the mainstream," Trump claimed.

Hours earlier, Trump announced that China had not kept up its end of trade negotiations, prompting him to increase tariffs 10 percent on $300 billion worth of new goods. Trump at the rally expressed confidence that a deal would get settled but said, "Until such time there is a deal we'll be taxing the hell out of China."

The rally was also Trump's first since special counsel Robert Mueller testified before Congress, the apparent final chapter of the Russia probe that has shadowed the White House for more than two years. But Trump only mentioned it once, mocking Mueller's at-times halting appearance by sarcastically saying the investigator seemed "sharp as a tack."

Though boisterous at the beginning, the crowd began to thin as Trump crossed the hour mark and stayed disciplined in touting the strong economy and his administration's accomplishments. The president's remarks were also interrupted twice by protesters.

Speaking to reporters before leaving for Cincinnati, Trump said he didn't know whether his supporters would revive the "Send her back" chant anyway or what his response would be if they did — adding that, regardless, he "loves" his political supporters.

"I don't know that you can stop people," Trump told reporters. "If they do the chant, we'll have to see what happens."

The chant in North Carolina followed racist tweets Trump sent against Omar and three other first-term lawmakers of color, instructing them to get out of the U.S. "right now" and saying if the lawmakers "hate our country," they can "go back" to their "broken and crime-infested" countries.

Two weeks ago, Trump wavered in his response to the divisive cries, letting the chant roll at the rally, expressing disapproval about it the next day and later retreating from those concerns.

Since then, Trump has pushed ahead with his attacks of Cummings and Baltimore. Heightening the drama, Trump's Ohio rally took place against a backdrop of simmering racial tension in the host city of Cincinnati.

A variety of opinions about the chant dotted the crowd before the rally.

Robyn McGrail, 64, and her husband were celebrating their 44th wedding anniversary by attending their third Trump rally. She said that if the crowd did begin the chant, "I'll probably be cheering. If they don't like America, they should leave. We love our country."

"We listen to him and we won't do it," Wells said. "I don't think it will happen. If it does, we won't participate because he's against that. That's not what his message is."

Hours before the president's rally, Omar posted a photo of herself and House Speaker Nancy Pelosi in Africa, writing, "They said 'send her back' but Speaker Pelosi didn't just make arrangements to send me back, she went back with me."

Trump captured Ohio by nearly 9 percentage points in 2016, and he fared somewhat better among midterm voters in Ohio than among voters in Rust Belt neighbors Michigan and Wisconsin. About half of Ohio voters, 49%, expressed approval of Trump's job as president, according to AP VoteCast, a survey of the electorate in 2018. Forty-four percent of voters in Michigan, and 43% of voters in Wisconsin, approved of Trump.

Several protests took place around the Trump rally, including one at the nearby National Underground Railroad Freedom Center. It focuses on the slavery era and current struggles against injustice around the world.