Sanders, Warren Clash With Moderates Over 'Medicare for All' 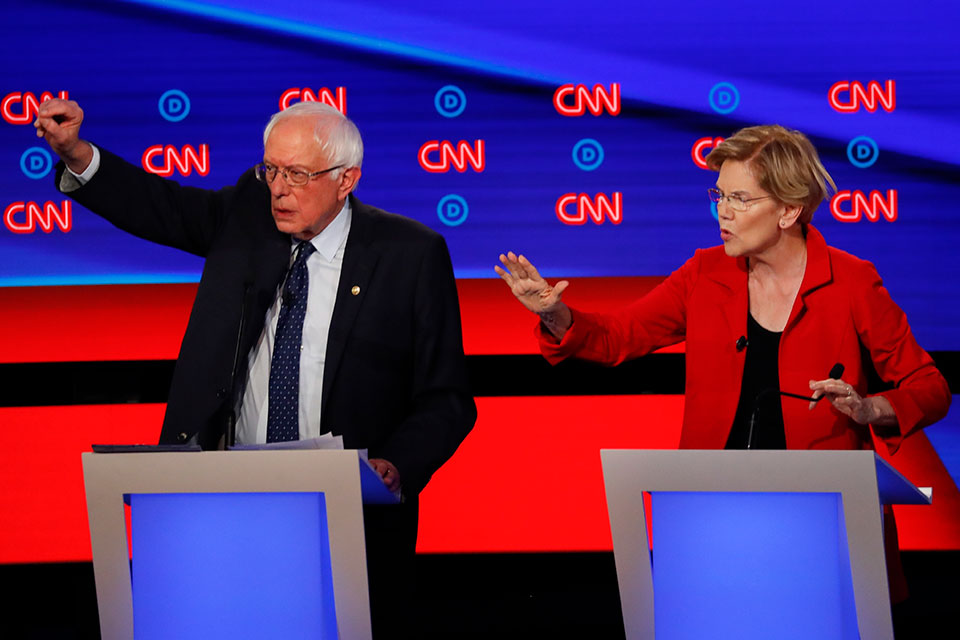 DETROIT (AP) — The signature domestic proposal by the leading progressive candidates for the Democratic presidential nomination came under withering attack from moderates in a debate that laid bare the struggle between a call for revolutionary policies and a desperate desire to defeat President Donald Trump.

Standing side by side at center stage on Tuesday, Bernie Sanders and Elizabeth Warren slapped back against their more cautious rivals who ridiculed "Medicare for All" and warned that "wish-list economics" would jeopardize Democrats' chances for taking the White House in 2020.

"I don't understand why anybody goes to all the trouble of running for president of the United States just to talk about what we really can't do and shouldn't fight for," said Warren, a Massachusetts senator, decrying Democratic "spinelessness."

Sanders, a Vermont senator, agreed: "I get a little bit tired of Democrats afraid of big ideas."

A full six months before the first votes are cast, the tug-of-war over the future of the party pits pragmatism against ideological purity as voters navigate a crowded Democratic field divided by age, race, sex and ideology. The fight with the political left was the dominant subplot on the first night of the second round of Democratic debates, which was notable as much for its tension as its substance. 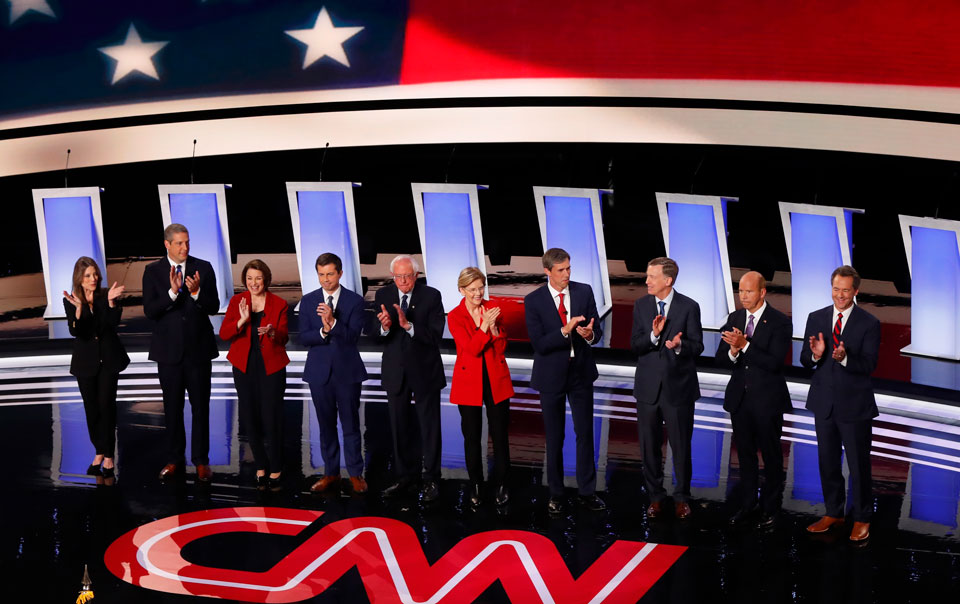 The Topic of Racism Unifies Candidates

While much of the debate was dominated by attacks on the preferred liberal health care policy, the issue of race emerged in the second hour. The candidates, all of whom are white, were unified in turning their anger toward Trump for using race as a central theme in his reelection campaign. Sanders called Trump a racist, while others said the president's rhetoric revived memories of the worst in the country's history, including slavery. 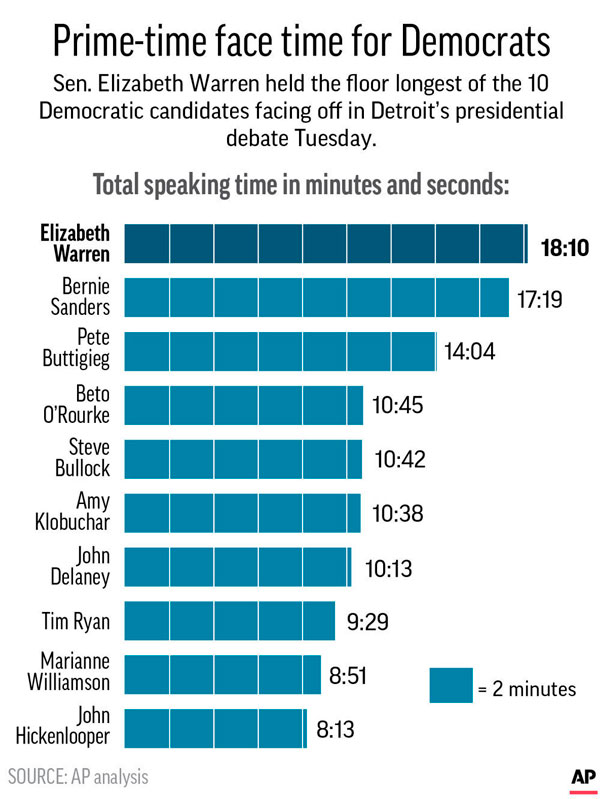 "The legacy of slavery and segregation and Jim Crow and suppression is alive and well in every aspect of the economy and the country today," said former Texas Rep. Beto O'Rourke, adding that he supported the creation of a panel to examine reparations for the descendants of slaves.

The marathon presidential primary season won't formally end for another year, but there was an increasing sense of urgency for many candidates who are fighting for survival. More than a dozen could be blocked from the next round of debates — and effectively pushed out of the race — if they fail to reach new polling and fundraising thresholds implemented by the Democratic National Committee.

Minnesota Sen. Amy Klobuchar, who is working to keep her campaign alive, aligned herself with the pragmatic wing: "We are more worried about winning an argument than winning an election."

Montana Gov. Steve Bullock, in his first debate appearance, took a swipe at Sanders: Working people "can't wait for a revolution," he charged. "Their problems are here and now."

While he avoided any direct confrontations with his more liberal rivals, Pete Buttigieg tried several times to present himself as the more sober alternative in the race. He rejected extreme positions, quoted scripture and abstained from calling out his opponents.

The 37-year-old mayor of South Bend, Indiana, also subtly emphasized the generational difference between himself and Sanders, the candidate 40 years his senior standing to his side.

Perhaps no issue illustrates the evolving divide within the Democratic Party more than health care.

Sanders' plan to provide free universal health care, known as Medicare for All, has become a litmus test for liberal candidates, who have embraced the plan to transform the current system despite the political and practical risks. Medicare for All would abandon the private insurance market in favor of a taxpayer-funded system that would cover all Americans.

In targeting Medicare for All, the more moderate candidates consistently sought to undermine Sanders and Warren. The moderates variously derided Medicare for All as too costly, ineffective and a near-certain way to give Republicans the evidence they needed that Democrats supported socialism.

"They're running on telling half the country that their health care is illegal," said former Maryland Rep. John Delaney.

"We have a choice: We can go down the road that Sen. Sanders and Sen. Warren want to take us, which is with bad policies like Medicare for All, free everything and impossible promises," he continued. "It will turn off independent voters and get Trump reelected."

Yet Sanders and Warren did not back down. While they are competing for the same set of liberal voters, there seemed to be no daylight between them.

"Health care is a human right, not a privilege. I believe that. I will fight for that," Sanders said.

Buttigieg called on his party to stop the infighting.

"It is time to stop worrying about what the Republicans will say," Buttigieg declared.

Biden to Face Off with Candidates on Wednesday

A new set of candidates, none with more to lose than Biden, will face off on Wednesday.

There, Biden will fight to prove that his underwhelming performance during last month's opening debate was little more than an aberration.

It won't be easy.

The 76-year-old Democrat is expected to face new questions regarding his past policies and statements about women and minorities — both key constituencies he needs to claim the Democratic Party's nomination and ultimately defeat Trump.

If I hadn’t won the 2016 Election, we would be in a Great Recession/Depression right now. The people I saw on stage last night, & you can add in Sleepy Joe, Harris, & the rest, will lead us into an economic sinkhole the likes of which we have never seen before. With me, only up!

Meanwhile, Trump said earlier in the day that he would watch Tuesday's prime-time affair from the White House. But his Twitter feed was uncharacteristically silent until Wednesday morning, when Trump declared that the Democratic candidates would "lead us into an economic sinkhole the likes of which we have never seen before."