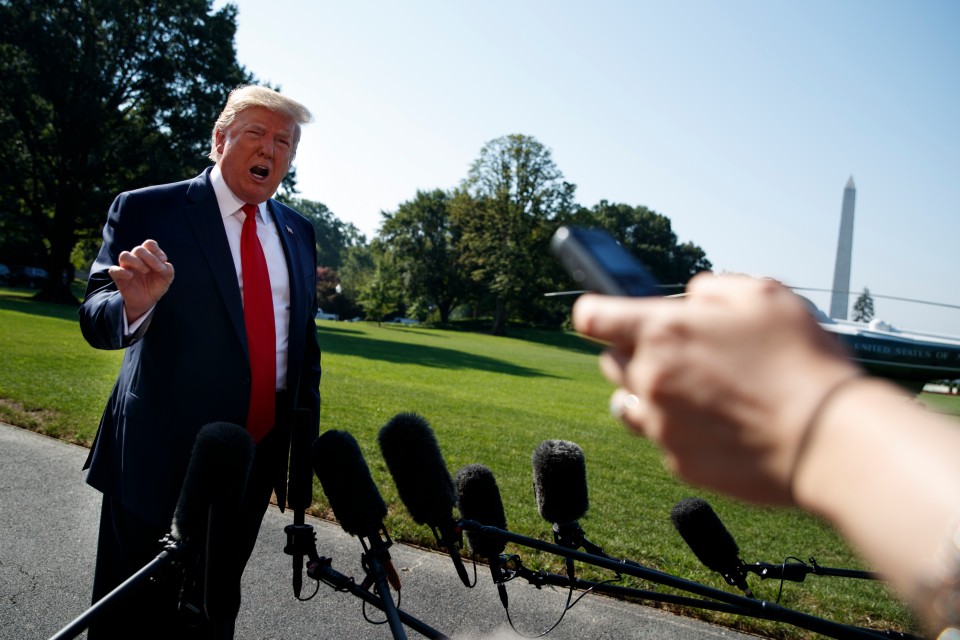 Speaking to reporters as he left the White House on Tuesday, Trump claimed the building had been flooded with thousands of letters, emails and phone calls thanking him for "getting involved" and exposing corruption.

"They really appreciate what I'm doing, and they've let me know it," said the Republican president. The White House did not immediately provide any evidence backing up Trump's claims.

Baltimore’s numbers are the worst in the United States on Crime and the Economy. Billions of dollars have been pumped in over the years, but to no avail. The money was stolen or wasted. Ask Elijah Cummings where it went. He should investigate himself with his Oversight Committee!

Trump's comments came in response to fierce backlash against his earlier remarks lashing out at Cummings, the chairman of the House Oversight Committee, and calling his district a "disgusting, rat and rodent infested mess." Trump also is under fire for his ongoing attacks on four Democratic congresswomen of color, who he tweeted should "go back" to their countries — even though three of the four were born in the United States and all are U.S. citizens.

'The Least Racist Person' in the World

But Trump on Tuesday nonetheless declared himself "the least racist person" in the world, despite his recent comments and racist tweets. And he said "African American people love the job" he's doing, despite the fact that numerous polls have shown African Americans are overwhelmingly negative in their assessments of his performance.

Approval among Black Americans has hovered around 10% over the course of Trump's presidency, according to Gallup polling, with 8% approving in June. And a new Quinnipiac University poll out Tuesday found that 80% of registered African American voters think Trump is racist, versus 11% who think he's not.

Polling also suggests his recent attacks could hurt Trump with suburban voters — and especially women — whom he may need to win next year. Trump in recent days, however, has expressed to advisers on his reelection team that he believes his broadsides against the minority Democrats will help excite his core supporters.

Not a Political Strategy

Trump insisted Tuesday that there was "zero strategy" in his attacks and that he was only "pointing out facts," even as he argued they were benefiting him.

"I think I'm helping myself because I'm pointing out the tremendous corruption that's taking place in Baltimore and other Democratic-run cities," Trump said, as he continued to hammer his criticism.

"Those people are living in hell in Baltimore," he said, adding he was open to some kind of unspecified federal involvement.

But Rep. Karen Bass, D-Calif., and chair of the Congressional Black Caucus, accused Trump of exaggerating the economic gains that African Americans have made since he took office and noted the continued racial gap.

"Currently, African American unemployment remains double that of White Americans and the national average despite gains in the job market," she said.

Black unemployment did reach a record low during the Trump administration: 5.9 percent in May 2018. It currently stands at 6 percent. But many economists view the continued economic growth since the middle of 2009, when Democratic President Barack Obama was in office, as the primary explanation for hiring.