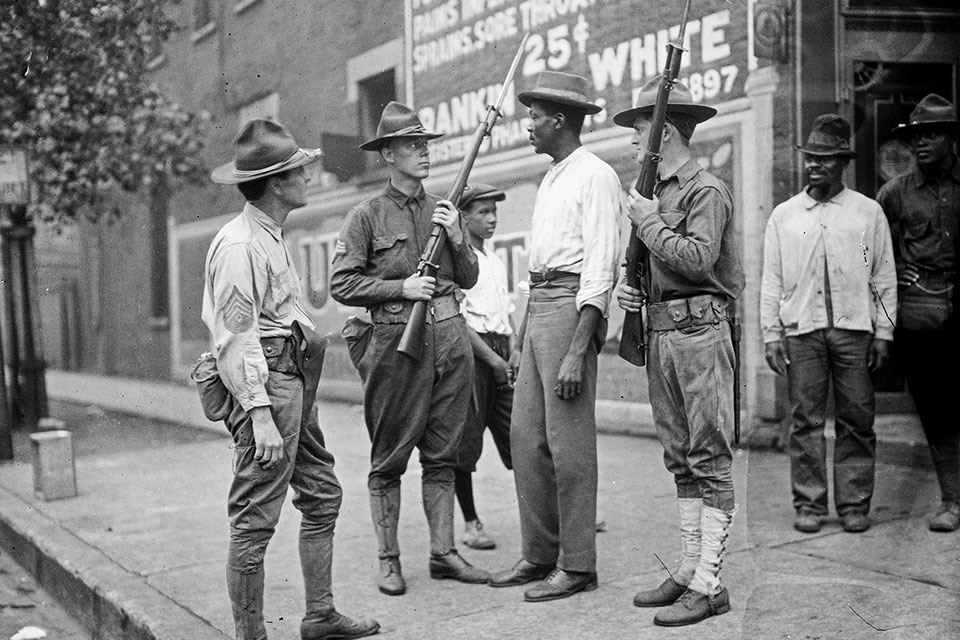 CHICAGO (AP) — On a hot July day in 1919, a Black 17-year-old swimming in Lake Michigan drifted in a dangerous direction — toward the White section of a Chicago beach.

White beachgoers, angry at Eugene Williams' intrusion, hurled rocks at him. One struck him in the head, and he drowned. And so began a week of riots that would kill 38 people — 23 of them Black, 15 of them White — and leave more than 500 people injured, according to the Chicago Historical Society. 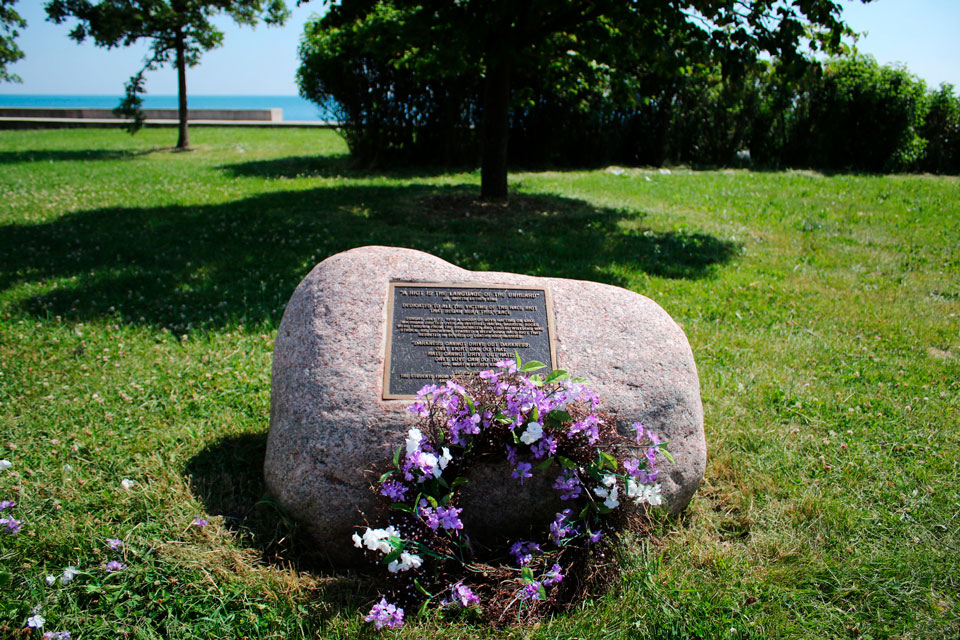 In this July 10, 2019, photo, a wreathe lies in front of a site commemorating the 1919 race riots in Chicago. The plaque is near the area where black teenager Eugene Williams was struck in the head with a rock and drowned in Lake Michigan, sparking race riots. (AP Photo/Noreen Nasir)It happened 100 years ago, in the "Red Summer" of race riots that spread across the United States. But the terror of those days still reverberates in a city that continues to grapple with segregation, housing discrimination, and deep tension between residents and police.

The nation's third-largest city is still contending with the 2014 killing of 17-year-old Laquan McDonald by a White police officer, and with the protests that erupted a year later when officials released dashcam video of that shooting.

"There's a clear trajectory for me in that Eugene Williams, in a way, is (1955 Mississippi lynching victim and Chicagoan) Emmett Till, who is, in a way, Laquan McDonald," said Eve L. Ewing, a sociology professor at the University of Chicago and author of a new collection of poems called "1919."

EDITOR'S NOTE: Hundreds of African Americans died at the hands of White mob violence during "Red Summer" but little is widely known about this spate of violence a century later. As part of its coverage of the 100th anniversary of Red Summer, AP will take a multiplatform look at the attacks and the communities where they occurred. https://www.apnews.com/RedSummer

After Williams' body was pulled from the water on July 27, a group of Black witnesses pointed to a White man they accused of throwing rocks, but police refused to arrest him. A crowd gathered and a Black man was arrested instead. Fighting broke out along the beach and spread from there.

White mobs raided Black neighborhoods on the South Side, burning homes and attacking people. Black residents, determined to hold their ground, fought back with guns and fists.

While Juanita Mitchell has trouble remembering some things from her childhood, the memories of July 1919 remain clear.

"We thought we were coming to a party," the 107-year-old woman said recently as she reflected on the day she made the trek to Chicago from Louisiana with her mother and sister.

"I could hear my uncle saying, 'Here they come.' And that meant the White folks were coming down the street."

At her uncle's urging, she and the other children hid behind a piano in his South Side home as a White mob drew closer. "He stood in the window, pulled out his gun. He was ready for the riot," Mitchell said.

Some historians say the violence may have been inevitable. Tensions had been building along with the Great Migration, the shift of Southern blacks to Northern cities as they fled life under Jim Crow — a system of oppressive laws that perpetuated racism, inequality and brutality. Many White workers saw the influx of Black people as a threat to their livelihoods.

"Even if Eugene Williams had not been hit on the head by a rock, almost certainly, racial violence would've taken place in Chicago on a massive scale," said Brad Hunt, vice president for research and academic programs at Chicago's Newberry Library.

There is reason to believe that the riots helped remake Chicago's racial landscape: "That kind of mob violence drove policies," Ewing said. "In order to understand the segregation that we live with and the racial inequalities that we live with in the 21st century, it is necessary to begin 100 years earlier."

Over time, racially restrictive covenants gave way to messaging from homeowners' associations discouraging members from selling to Black families — all to keep certain Chicago neighborhoods White and to concentrate the African American population in the city's "Black belt," a string of neighborhoods on the South Side.

"1919 does influence the racial geography of the city today," Hunt said.

"The boundaries of the Black belt will eventually expand — particularly after World War II during a second wave of migration from the South, at which point the racially restrictive policies become less acceptable," he said. "The Supreme Court will strike down, for instance, restrictive covenants in 1948. But what happens is the Black belt merely expands. And we never see racial integration in a sustained way on the South Side of Chicago. All we have is a larger segregated space until the migration really stops, at which point we have fairly well-defined boundaries. Residents certainly know them."

"Back in the old days, you might've gotten punished in the way of brutality" if you were on "the wrong side of town," said Holyfield, who is Black. "Now, they're going to punish you with tickets. ... That mind frame from a long time ago, where that person's not supposed to be over here, it's still here. It's systematic now."

Chicago has seen some progress.

Just this year, the city for the first time elected a Black woman, Lori Lightfoot, as mayor. And the state's attorney, schools chief and transit authority president are Black.

But a year ago, the website 24/7 Wall St. found that the Chicago area was the second most segregated in America, behind the Detroit area.

To change that, some say, the city must both come to terms with its racial history and press forward: "If we want to dream of a different future, it's incumbent upon us to have the moral courage, the intellectual ambition and the political imagination to think about what it would look like to make a different world," Ewing said.

No national events are scheduled to mark the centenary of the Red Summer, but some local groups plan to recognize it. The Newberry Library is marking the anniversary with programming throughout the year in Chicago, partnering with local organizations to educate people about the unrest.

At one such event this past spring, White and Black Chicago residents gathered for a panel discussion on redlining — the practice of refusing a loan or other service to those living in poor, often African American neighborhoods.

Peter Czosnyka, a 67-year-old Polish American and lifelong Chicago resident, said his family left the city's northwest side after the neighborhood's demographics began to shift. As soon as he graduated from high school, his family moved to the suburbs. He knows he was fortunate, and Black people were not so lucky.

"Even though the place I grew up in was a redlined neighborhood, we were able to get out, because there were Polish banks. We weren't prevented from leaving," he said.