Mueller's Testimony is a Risk for Trump...and the Democrats 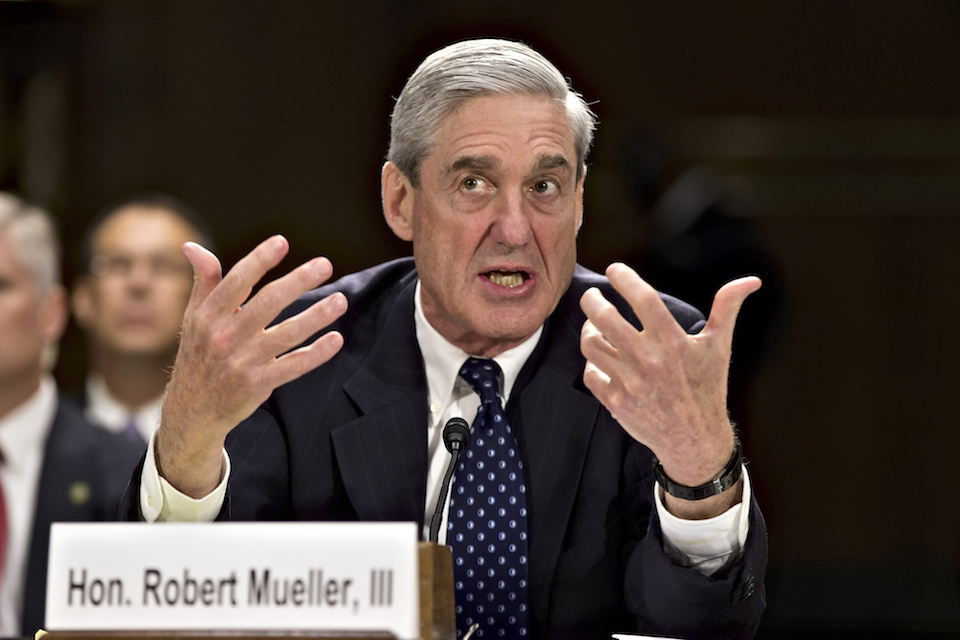 WASHINGTON (AP) — Robert Mueller's testimony before Congress will depend not so much on what he says, but that he's even saying it at all.

For Democrats, the special counsel's appearance Wednesday creates a moment many have been waiting for: Mueller finally speaking out, piercing the public consciousness about President Donald Trump's response to the Russia investigation and whether anything should be done about it.

The political stakes are high for Trump, but also for Democrats, who have spent the past two years pushing toward this day. As public attention has drifted and views have hardened, Democrats are counting on Americans hearing what most have not likely read — the stunning findings of Mueller's 448-page report.

"Let us listen, let us see where the facts will take us," said House Speaker Nancy Pelosi, D-Calif. "And then, we'll see what happens after that."

Yet there's a real possibility that Mueller may not bring clarity.

Just the facts approach may not cut it

It took months to negotiate his appearance before Congress and he has been reluctant to speak beyond what he and his team wrote. Few bombshells are expected.

As the House Judiciary Committee and the House Intelligence Committee gavel in, the buttoned-down prosecutor, once envisioned as a trusted last word, may deliver just-the-facts responses that leave more questions than answers.

Rather than galvanizing public opinion and the questions of impeachment, Mueller's reluctant appearance may become just another chapter in the Trump era that won't be closed until the 2020 election.

Trump tried to project a lack of interest, claiming he will not tune in to Wednesday's hourslong hearings and saying Democrats are "just playing games."

"I won't be watching Mueller," he told reporters.

The nation, though, will likely pay attention.

Report did not clear Trump of obstruction

Mueller's appearance comes more than two years since the start of the Russia investigation, an extraordinary moment in Trump's presidency when, after Trump had fired FBI Director James Comey, his Justice Department appointed Mueller to take over the inquiry into election interference and the potential role that Trump and his winning 2016 campaign may have played.

Mueller spoke publicly only once, saying his team's report, released in April, should speak for itself.

The report found that while there was no evidence the campaign colluded with Russia to swing the election, Trump could not be cleared of trying to obstruct the investigation . But Mueller believed he couldn't be indicted in part because of a Justice Department opinion against prosecuting a sitting president.

The special counsel's team appeared to punt the question to Congress to decide next steps. More than 80 House Democrats now say there should be impeachment proceedings, and it's likely that Mueller's testimony increases that number.

But time has a way of changing the political dynamic.

While Mueller's testimony was once envisioned as a crystalizing event, a Watergate-style moment to uncover truths, public attention has drifted in the months since the report was released.

Trump, a master at changing the subject, has easily shifted the public's attention to his racist attacks on four women of color in Congress.

"Timing matters," said Julian E. Zelizer, a professor of history and public affairs at Princeton University. He and others who favor opening impeachment proceedings say Mueller should have testified months ago.

A CNN poll found that just 3% said they had read the whole report.

Democrats are counting on Mueller's presence to capture public attention in ways the report alone has been unable to do, with some comparing it to the movie version of the book.

"I do think that the contents of the report are so significant, and so damning, that when Mr. Mueller brings them to life, and actually tells the American people ... it will have an impact," said Rep. David Cicilline, D-R.I., a member of the House Judiciary Committee.

"This will be really the first opportunity for the American people to hear directly from Mr. Mueller about what he found about Russian interference in the American presidential election and efforts by the president to impede, undermine or stop the investigation," he said.

It's not lost on Democrats that they are brushing up against a narrative already set, by Trump's claims of no collusion or obstruction, and Attorney General William Barr's own framing of the report before its public release with his stamp of no wrongdoing.

"There are still millions of people who think, absurdly, that there is no evidence of presidential obstruction or collusion in the report," said Rep. Jamie Raskin, D-Md., a member of the House Judiciary Committee and also a professor of constitutional law.

He said Trump and Barr have left a "fog of propaganda" hanging over the country. "We just want to clear the fog," he said.

Congress has oversight of the executive branch, and lawmakers on the committees plan to delve into key areas of the report where Trump interfered with the investigation.

Democrats often note that obstruction was included in the articles of impeachment against President Richard Nixon.

One focus will be on the conversations Trump had with the former White House counsel, Don McGahn, first as the president tried to fire Mueller over the Russia probe, and later to direct the lawyer to deny that he had ordered for Mueller be dismissed.

There will be questions about potential witness tampering, and the suggestions of a presidential pardon for Trump's former campaign manager, Paul Manafort, and conversations with Trump's former personal attorney, Michael Cohen. Both men are now in custody, serving sentences on other charges.

At the same time, Republicans will likely try to turn the tables, casting doubt on the Russia investigation and its origins during the Obama administration.

But Mueller, 74, who hews to standards of an earlier era, is not expected to stray beyond the document his team produced.

Aides to lawmakers say they have been reviewing his past congressional appearances and are expecting one-word answers and few surprises.

That could lead to an unfulfilling conclusion for Democrats, and others, who are hoping Mueller's testimony will bring some resolution.

The top Republican on the Judiciary Committee, Rep. Doug Collins of Georgia, said the hearing will be "like an old TV show that you watched years ago. ... After a few minutes you could quote what the characters could say, and nothing is new anymore."

"Frankly, the American people have moved on," Collins said.