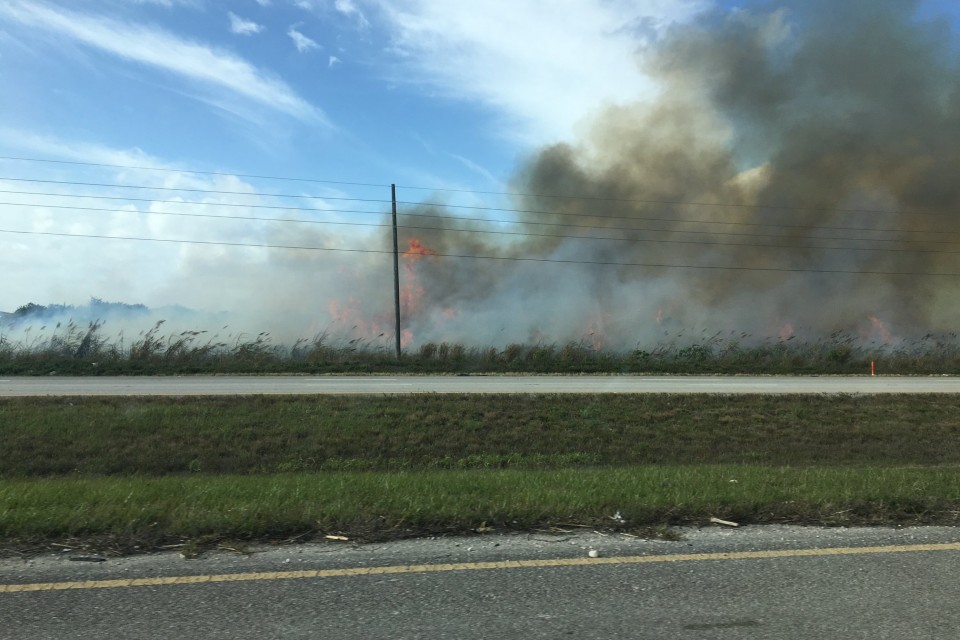 These annual burnings, which take place from October to March, May or June, make it easier for farmers to harvest the sugarcane.

However, the side effects leave the residents of Belle Glade, South Bay and Pahokee with respiratory problems and a poor quality of life.

While these burnings have been going on for several years with groups rising up to combat them, a recent lawsuit against the Florida sugar industry has brought it to national light, bringing attention to an issue that has forced residents to take a stand.

The lawsuit, filed by the Berman Law Group in June, seeks to permanently end the pre-harvesting burning, obtain economic and property damages, and health monitoring, particularly for children, the poor and elderly.

“The firm has been working on this issue for a long time prior to me joining,” said Joseph Abruzzo, director of government relations for the Berman Law Group. “What put them on track was several clients alerting them to what was occurring with them and that spawned the investigation into hiring the experts (and) finding what was in the air of the Glades community.”
Joining the fight in this lawsuit is Frank Biden, the younger brother of Presidential candidate Joe Biden, and former NFL player Fred Taylor, who grew up in the Glades community. In a video produced by the Berman Law Group, both agree the burnings need to stop.

The sugar industry burns about nine million tons of sugarcane foliage on 400,000 acres each year. EarthJustice, a legal group for environmental organizations, says the burning puts out more than 2,800 tons of hazardous pollutants into the air annually. According to the Sierra Club, an environmental non-profit organization, the sugarcane is burned in order to rid the plant of its outer layer so that the sugar stalk will remain.

Patrick Ferguson, the organizing representative for the Sierra Club’s Stop Sugar Field Burning Campaign, said health issues due to the burnings are a major concern.

“Exposure to pre-harvest sugar field burning pollution has been linked via medical research to many negative health impacts including respiratory diseases, cancer, cardiac disease, and poor infant health outcomes,” he said. “Many of the campaign volunteers either themselves suffer from respiratory issues or have family members who do. Some of our volunteers have young children who have to use breathing devices during the 6-8 months long harvesting season when sugarcane is burned.”

The lawsuit alleges that due to the burning, harmful pollutants are released into the air. It creates “black snow” during burn season, or ashes that fall down onto the Glades communities. Because of this, children in the Glades communities use breathing machines at night and walk to school with trash bags over their head to protect them from the black snow.

“There’s a lake, they have issues,” Mr. Abruzzo said. “I wasn’t too long ago out at one of the churches and multiple ladies had on white dresses. They know when the ash falls on your dresses ... . You can’t swipe it away because it will create a black line. You blow it. The black snow is right in front of their faces, on their car, over their homes and worst of all, it’s in the lungs of the children and elderly.”

The Poor People’s Campaign held an event in Belle Glade where residents, pastors and activists had the chance to share their experiences about the burnings.

Steve Messam, a pastor born and raised in Belle Glade, shared how his father came to the United States from Jamaica as a contracted migrant worker hired to cut the sugarcane. The pastor got involved with the Sierra Club’s campaign because he noticed many of the people he knew were suffering from breathing difficulties.

“They were suffering from a lot of respiratory issues, whether it was asthma or allergies,” he said during Poor People’s Campaign gathering. “A lot of people were also dying from cancer at a crazy rate.”

Mr. Ferguson says the black snow and air quality affects not only health issues, but the community’s quality of life.

“You’re talking about the harvesting season lasting from October to May, some of the best months to be outside and enjoy the Florida weather and during days when large amounts of toxic burning takes place, people in the region are often forced to stay indoors,” he said.

Alina Alonso, director of the Florida Department of Health in Palm Beach County, said the health department uses a website called airnow.gov to monitor air quality within the region. She said air quality counts remnants that come from ash and into the air. The website measures air quality ranging from good to hazardous.

“Only those who are sensitive to the smoke or burnings will be affected by moderate,” Ms. Alonso said. “But if it gets above 100, then that’s unhealthy for everyone.”

Mr. Ferguson said many doctors in the area suggest options for residents that aren’t always reasonable.

“One common thread that we continue to hear is that doctors tell residents from the communities heavily impacted by pre-harvest sugar field burning that the best long term solution for their health issues is to move to an area with better air quality, which many residents don’t have the resources or the will to do so, nor should they have to do so,” he said.

Back in 2015, the Sierra Club filed a legal action asking the U.S. Environmental Protection Agency to regulate the burnings.

“The way sugarcane burning is regulated makes it an environmental justice issue as well. Regulations in place are based off wind speed and direction that prevent burn permits from being issued when the winds would carry the smoke and ash toward the more affluent in eastern Palm Beach County,” Mr. Ferguson said. “However minimal protections are in place from the toxic smoke and ash when they blow toward the lower income rural communities within the Everglades Agricultural Area. This leads the predominantly Afri-can-American and Hispanic population of the Glades communities of western Palm Beach County that are surrounded by over 75 percent of the total sugarcane acreage in Florida to disproportionately bear the nega-tive impacts of pre-harvest sugar field burning.”

The alternative that’s offered to the sugarcane industry is green harvesting.

“The Florida sugarcane industry already green harvests in small amounts each year. Other countries around the world have been phasing out of burning altogether because of the negative health and environmental impacts of pre-harvest burning but also because of the many benefits associated with green harvesting as well,” Mr. Ferguson said.

Because of the pre-harvest burning, the Glades communities have suffered economically as well. Mr. Abruzzo said whereas Palm Beach county and the state of Florida have seen an increase in real estate values, property values for the Glades community remain stagnant.

“Everybody knows if you move out there, you’ll have to deal with four months of black snow over your home,” Mr. Abruzzo said.

Economic Condition of the Community

Mr. Ferguson believes that a shift towards green harvesting can help improve the economic condition of the community.

“[It] can create more economic opportunities which are important especially for the lower income Glades communities,” he said. “What the sugar industry considers as trash can be used to generate more electricity, create mulch, biochar, biofuels, and can even be used to create tree-free paper products.”

Florida sugar companies have caught wind of the Berman Group’s lawsuit and say that they believe in their practices.

“The health, safety and jobs of our communities all are vitally important to U.S. Sugar,” spokeswoman Judy Sanchez told Treasure Coast Newspapers in a statement. “We are American farmers and stand behind the safety and integrity of our farming practices, which are highly regulated and legally permitted on a daily basis by the government. Our farming practices are safe, environmentally sound, highly regulated and closely monitored.”

Ms. Sanchez also said company officials “live in these Glades communities and raise our families here—our children and grandchildren—in the neighborhoods, schools and churches throughout these small, close-knit farming towns.”

Mr. Abruzzo said he’s looking forward to the company providing the names of those officials who live in the area.

“One of the most disappointing things since the lawsuit was filed is the propaganda that the sugar companies are helping lead that we are well aware of and without question will be discussing in depositions, primarily, that the lawsuits are trying to put sugar out of business. That could be anything but the truth,” he said. “The sugar companies profit in the billions of dollars per year. I’m sure they wouldn’t even notice on their balance sheets doing it a proper way and not harming an entire community. This would create more jobs if they do it by hand. At the end of the day, they just can’t burn.”

Mr. Ferguson and volunteers that work with him have spent the past four years pressing this issue. He said it’s something that must be known all around the country.

“There’s no reason the sugarcane industry should continue to put short term profits ahead of the long-term health and welfare of the surrounding residents, especially when there are so many benefits that can be gained from transitioning to green harvesting,” he said. “It’s time for the industry to become better neighbors to the surrounding communities by stopping the burn and switching to green harvesting.”

“I believe it’s a very good thing that attention is being paid to this very important issue. The Glades has been suffering for a very long time.” Mr. Abruzzo said. “Ultimately, I do believe that the law will be with the people. Once this is corrected, I believe the Glades will stop being one of the poorest places in the country. It will be vibrant and flourishing.”

Mr. Abruzzo said the first step after the legal filing is to immediately get the sugar industry to stop burning while the case is going on. This case is federal, but they also plan to file state and individual claims.