Tropical Storm Barry Closes in With What Could Be Epic Rain 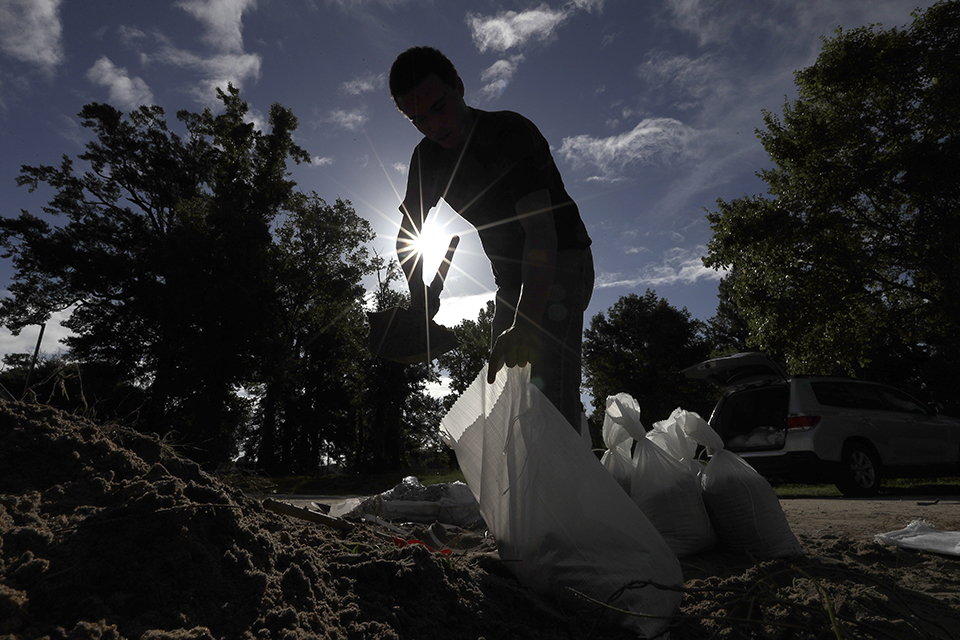 NEW ORLEANS (AP) — Homeowners sandbagged their doors and tourists trying to get out of town jammed the airport Friday as Tropical Storm Barry began rolling in with the potential for an epic drenching that could prove whether New Orleans and the rest of Louisiana learned the lessons of Hurricane Katrina over a decade ago.

With the strengthening storm expected to blow ashore early Saturday near Morgan City as the first hurricane of the season, authorities rushed to close floodgates and raise the barriers around the New Orleans metropolitan area of 1.3 million people for fear of disastrous flooding.

About 3,000 National Guard troops along with other rescue crews were posted around the state with boats, high-water vehicles and helicopters. Drinking water was lined up, and utility crews with bucket trucks moved into position in the region.

"This is happening. ... Your preparedness window is shrinking," National Hurricane Center Director Ken Graham warned. He added: "It's powerful. It's strengthening. And water is going to be a big issue."

While 10,000 people or more in exposed, low-lying areas along the Gulf coast were told to leave, no evacuations were ordered in New Orleans, where city officials instead urged residents to "shelter in place" starting at 8 p.m.

"My concerns are just hoping it's not going to be another Katrina," said Donald Wells, a restaurant cook in New Orleans.

Forecasters said slow-moving Barry could unload 10 to 20 inches (25 to 50 centimeters) of rain through Sunday across a swath of Louisiana that includes New Orleans and Baton Rouge, as well as southwestern Mississippi, with pockets in Louisiana getting 25 inches (63 centimeters).

The storm's leading edges lashed the state with bands of rain for most of the day, and some coastal roads were already under water Friday morning.

Barry was expected to arrive as a weak hurricane, just barely over the 74 mph (119 kph) windspeed threshold. But authorities warned people not to be fooled by that.

"Nobody should take this storm lightly just because it's supposed to be a Category 1 when it makes landfall," Gov. John Bel Edwards said. "The real danger in this storm was never about the wind anyway. It's always been about the rain."

Authorities took unprecedented precautions: The governor said it was the first time all floodgates were sealed in the New Orleans-area Hurricane Risk Reduction System. Still, he said he didn't expect the river to spill over the levees.
Workers also shored up and raised the levee system in places with beams, sheet metal and other barriers.

Barry's downpours could prove to be a severe test of the improvements made to New Orleans' flood defenses since the city was devastated by Katrina in 2005. The Mississippi River is already running abnormally high because of heavy spring rains and snowmelt upstream, and the ground around New Orleans is soggy because of an 8-inch torrent earlier this week.

The Mississippi is expected to crest Saturday at about 19 feet (5.8 meters) in New Orleans, where the levees protecting the city range from about 20 to 25 feet (6 to 7.5 meters) in height. That could leave only a small margin of safety in some places, particularly if the storm were to change direction or intensity.

"The river should be taken seriously. It's a really powerful river," said Nadia Jenkins of New Orleans. She hadn't yet decided whether to leave but wasn't taking any chances: "We're prepared. We've got stuff stocked up. Car is gassed."
Scientists say global warming is responsible for more intense and more frequent storms and floods, but without extensive study they cannot directly link a single weather event to the changing climate.

Late Friday afternoon, Barry was about 70 miles (115 kilometers) southeast of Morgan City, with winds of 65 mph (100 kph). Tracking forecasts showed the storm continuing on toward Chicago, swelling the Mississippi River basin with water that must eventually flow south again.

In Baton Rouge, Kaci Douglas and her 15-year-old son, Juan Causey, were among dozens filling sandbags at a fire station. She planned to sandbag the door of her townhouse. "I told my son it's better to be safe than sorry," she said.

In New Orleans, Adam Slocum and his wife got ice, water and extra food, filled their generator with gas and parked their cars on higher ground at a nearby grocery store. Still, he said he wasn't too concerned about his house.

"My house is raised, and being this close to the river we typically don't have too many problems," he said.

Elsewhere in New Orleans, a group of neighbors took it upon themselves to clean out the storm drains on their street. Working as a team to lift the heavy metal covers off, they discovered that most of the drains were full of dirt, leaves and garbage.

All over town, people parked their cars on the city's medians — referred to around here as "neutral grounds" — in hopes their vehicles would be safe on the slightly elevated strips.

Tourists converged on the airport in hopes of catching an early flight and getting out of town ahead of the storm. At least one convention — that of the Delta Sigma Theta sorority — was cut short by a day. A Rolling Stones concert was postponed from Sunday to Monday.

Katrina caused catastrophic flooding in New Orleans 14 years ago and was blamed for more than 1,800 deaths in Louisiana and other states, by some estimates.

In its aftermath, the Army Corps of Engineers began a multibillion-dollar hurricane-protection system that isn't complete. The work included repairs and improvements to some 350 miles (560 kilometers) of levees and more than 70 pumping stations.