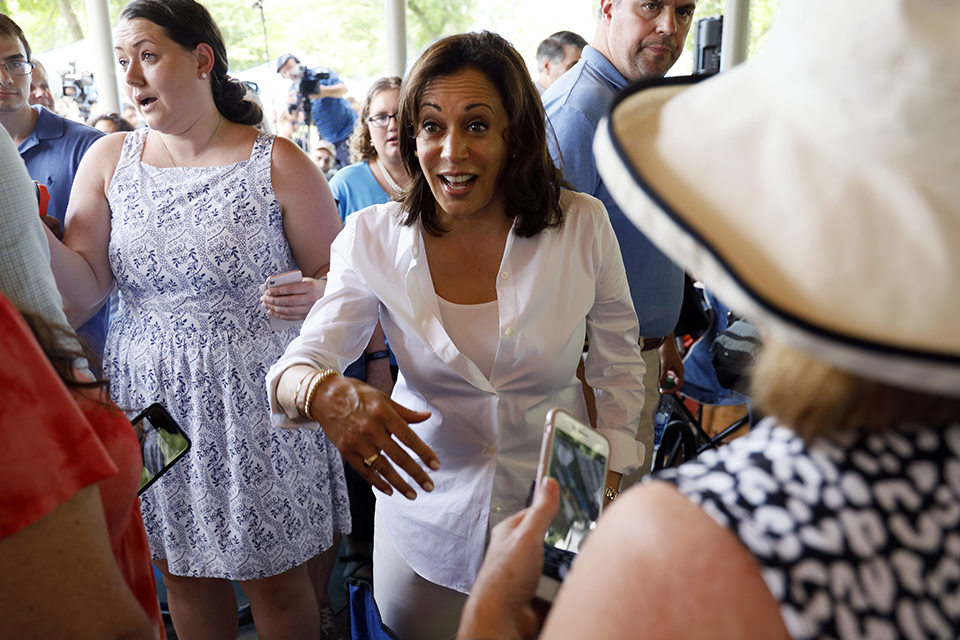 In her first conversation with Rep. Bobby Rush, a veteran member of the Congressional Black Caucus, Harris was explicit about what she wanted: his endorsement in the Democratic presidential primary. Rush demurred, not yet ready to pick a side in the most crowded Democratic race in modern political history.

Still, Rush was impressed with Harris and watched her closely in last week's debate. When she called again after the face-off, the Illinois congressman said he was ready to back her campaign.

Harris' courting of Rush is a snapshot of the broader, behind-the-scenes effort underway to win over the 55 members of the CBC — a primary-within-the-primary for support of the nation's most influential Black lawmakers. It reflects both the increasing power of black leaders within the Democratic Party and the importance of the communities they represent to those jostling to become the party's White House nominee.

It also puts the CBC in the awkward position of having to choose between some of its own members — New Jersey Sen. Cory Booker and Harris, a California senator — and other longtime allies of the influential caucus, including former Vice President Joe Biden.

"It is beautifully uncomfortable to be in this spot," said Rep. Emanuel Cleaver, D-Mo., who's received calls for support since the debates from two top-tier candidates.

It's a departure, Cleaver said, from the years when "the CBC members had one choice and it was the person who had strong civil rights credentials."

Those who have endorsed candidates have split chiefly between two: Harris and Biden, who has deep ties to the African American community. As of Wednesday, Harris had seven endorsements from CBC members and Biden had five. Booker had the backing of two CBC members from his home state of New Jersey.

Harris, Biden and others have been wooing CBC members through formal phone calls and in-person meetings, as well as casual conversation in the halls of Congress, according to interviews with lawmakers and their allies. Biden met with the CBC members on June 20 to discuss criminal justice policies. Harris and Booker have both attended some of the weekly CBC meetings in the Capitol.

The CBC has faced tough choices before. In the 2008 Democratic primary, some members were caught between Hillary Clinton, who had strong personal ties to the caucus, and Barack Obama, a caucus member who held the prospect of becoming the first black president. Several members, including Lewis, initially viewed Clinton as most electable and endorsed her campaign before ultimately backing Obama.

Questions of electability and loyalty are again driving the CBC members' decisions.

Harris has seen an uptick in CBC support since the debate, when she challenged Biden over his comments about working with segregationists and his opposition to busing, noting her own experience as a child who was bused as part of desegregation efforts.

"In that moment, I knew exactly what she was talking about — she was talking about access to opportunity that would otherwise change the trajectory of her life," Rep. Jahana Hayes, a freshman CBC member from Connecticut, wrote in her endorsement Wednesday. "That resonated with me. That was me."

Rush said the moment stood out to him as an example of how Harris might take on President Donald Trump in a general election debate.

He concluded: "She is electable."

Biden's support from CBC members is rooted in part on his decades working alongside many of them on Capitol Hill, as well as his eight years as Obama's vice president. Biden has been making regular calls to lawmakers in the caucus, according to advisers.

"The CBC is a powerful voice that deserves respect," said Rep. Cedric Richmond of Louisiana, Biden's campaign chairman and a CBC member himself. "And it's not something a campaign chairman or a surrogate would do. You have to do it yourself."

Rep. Don McEachin, D-Va., didn't need a call from Biden to endorse him in May, though he got one anyway. McEachin said his support for Biden only increased after the debate due to what he considered "unfair" attacks on the former vice president over issues of race.

The split in the CBC thus far between Harris and Biden roughly reflects the divide among voters.

Biden remains atop the field of Democratic candidates in several post-debate polls, but Harris enjoyed an increase in support from voters. Among black Democratic voters in particular, support for Biden and Harris is roughly equal in a Quinnipiac poll following the debates, 31% and 27%, respectively.

But Democrats, including African American Democrats, are still most likely to call Biden the contender best suited to defeat Trump. The Quinnipiac poll found 42% of Democratic voters, and 53% of black Democratic voters, saying Biden had the best chance to beat Trump of the two dozen or so candidates.

CBC members believe their endorsements mean more than the stamp of approval from members of the Washington establishment. Former Maryland Rep. Donna Edwards said her one-time colleagues at the CBC are pushing candidates to directly address the conditions of black America and the issues that matter most to African Americans, including racial inequality, ballot access, police shootings of unarmed blacks and mass incarceration.

"What they will be able to do is go out and validate, they co-sign," Edwards said.