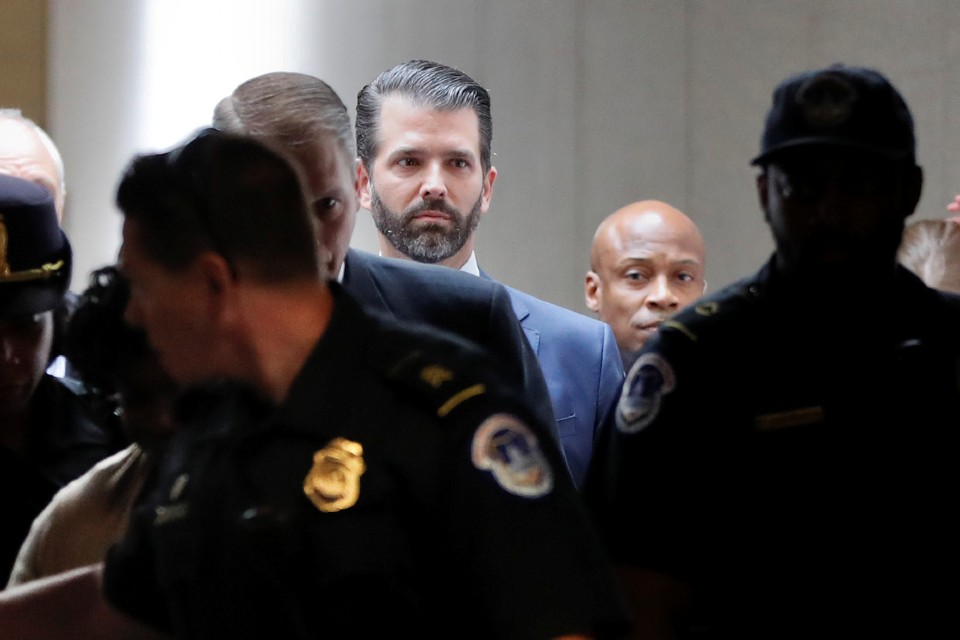 WASHINGTON (AP) — Russian efforts to interfere in the 2016 U.S. presidential election bore some of the textbook tricks of the trade of Kremlin spycraft, including the volume and breadth of contacts with Trump associates, former FBI officials told lawmakers Wednesday in the latest congressional hearing dedicated to special counsel Robert Mueller's Russia report.

The two officials, Robert Anderson and Stephanie Douglas, highlighted aspects of the Mueller report they said showed Russian efforts to vet and test Trump campaign associates, to establish back channels of communications and to spread their contacts around in hopes of maximizing their chances of getting what they wanted.

It is an absolute classic tradecraft of Russia and Russian intelligence services. They'll never have one point of failure

"It is an absolute classic tradecraft of Russia and Russian intelligence services. They'll never have one point of failure," said Anderson, a former FBI executive assistant director who used to supervise counterintelligence investigations. "If they're looking to try to obtain or pass information or potentially even influence information, they'll make sure that they have numerous aspects or points to where they can try to get that done."

The House Intelligence Committee invited the ex-officials to testify about the counterintelligence implications of Mueller's investigation into potential coordination between Russia and President Donald Trump's campaign. Mueller did not find a criminal conspiracy between the campaign and Russia but did detail a series of interactions and outreach that have alarmed Democrats and accelerated calls from some in the party for impeachment proceedings and renewed investigations.

More Than 100 Contacts Between Russia and Trump's Associates

Rep. Adam Schiff, the Democratic committee chairman, noted in his opening remarks that Mueller detailed more than 100 contacts between Russia and associates of the president.

"The primary objective of a counterintelligence investigation is not to target an individual for prosecution but to protect the nation by developing information about the actions and intentions of foreign powers and to thwart them before they can act against us," Schiff said at the hearing.

Among the interactions was a June 2016 meeting at Trump Tower during which the president's oldest son, Donald Trump Jr., expected to receive dirt on his father's Democratic opponent, Hillary Clinton. Trump's first national security adviser, Michael Flynn, discussed Obama administration sanctions against Russia with the then-Russian ambassador in the weeks leading up to the president's inauguration.

It immediately put the existing administration in a horribly conflicting position

"It immediately put the existing administration in a horribly conflicting position, and they didn't know about the backchannel in advance of the inauguration," said Douglas, also a former FBI executive assistant director. "It also probably assured the Russians that they were going to get a more favorable treatment" by the incoming Trump administration.

She highlighted how Trump's campaign chairman, Paul Manafort, shared polling data during the presidential campaign with Konstantin Kilimnik, a business associate accused of having ties to Russian intelligence.

He also told Kilimnik he was willing to provide "private briefings" about the Trump campaign to Oleg Deripaska, a Russian billionaire with ties to Russian President Vladimir Putin.

"I thought that that was very interesting, that they are tasking him and building upon that," Douglas said. "And if he would have stayed with the campaign, I am sure they would have continued to task him."

Also Wednesday, Trump Jr. arrived on Capitol Hill for a second closed-door interview with the Senate Intelligence Committee. Senators want to discuss answers he gave to the panel's staff in a 2017 interview and to another Senate panel in a separate interview that year.

The president's former lawyer Michael Cohen told a House committee in February that he had briefed Trump Jr. approximately 10 times about a plan to build a Trump Tower in Moscow before the presidential election. Trump Jr. had told the Senate Judiciary Committee he was only "peripherally aware" of the real estate proposal.

Trump Jr. told reporters on his way in on Wednesday that he had "nothing to correct."

In the House hearing, both ex-FBI officials retired from the bureau before it opened its investigation into the Trump campaign in summer 2016. By inviting them instead of agents involved in the investigation, Democrats are giving center stage to longtime career officials devoid of the political baggage that accompanies some of the Republican president's more outspoken critics, including former FBI Deputy Director Andrew McCabe and former agent Peter Strzok. Both were fired last year.

Even so, the partisan divisions that had riven the committee in recent years manifested themselves again on Wednesday morning. Schiff said most Americans consider the Trump campaign's embrace of Russian aid "to constitute plain evidence of collusion." The panel's top Republican, Rep. Devin Nunes, repeatedly described allegations of collusion to be a "hoax" and suggested Democrats should apologize.

"One would think the Democrats would simply apologize and get back to lawmaking and oversight, but it's clear they couldn't stop this grotesque spectacle even if they wanted to," Nunes said.

The hearing comes two days after the House Judiciary Committee heard from John Dean, the former White House counsel in the Nixon administration, who described parallels between Richard Nixon's behavior during the Watergate investigation and Trump's own conduct in the Mueller probe.