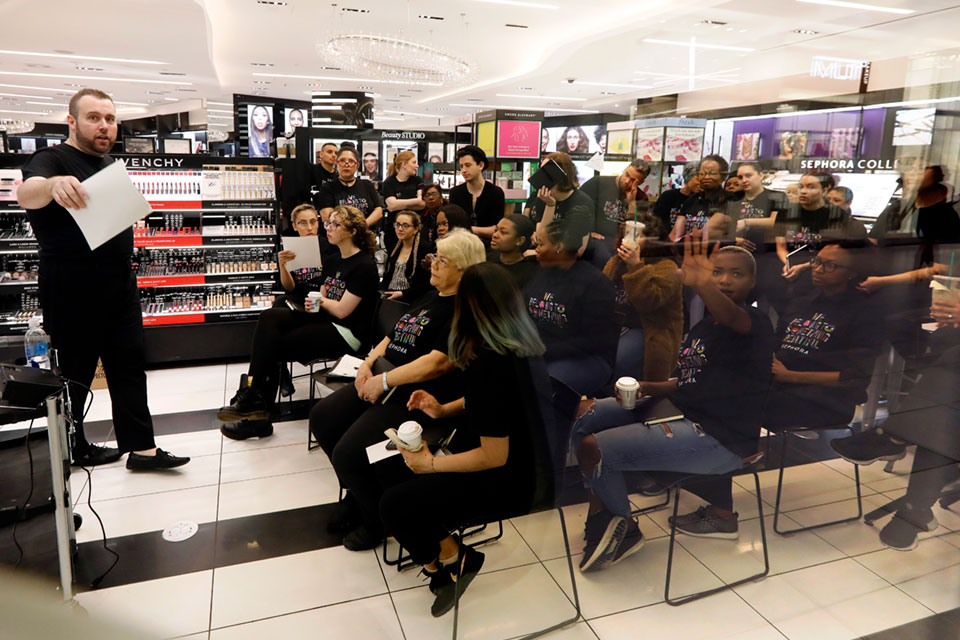 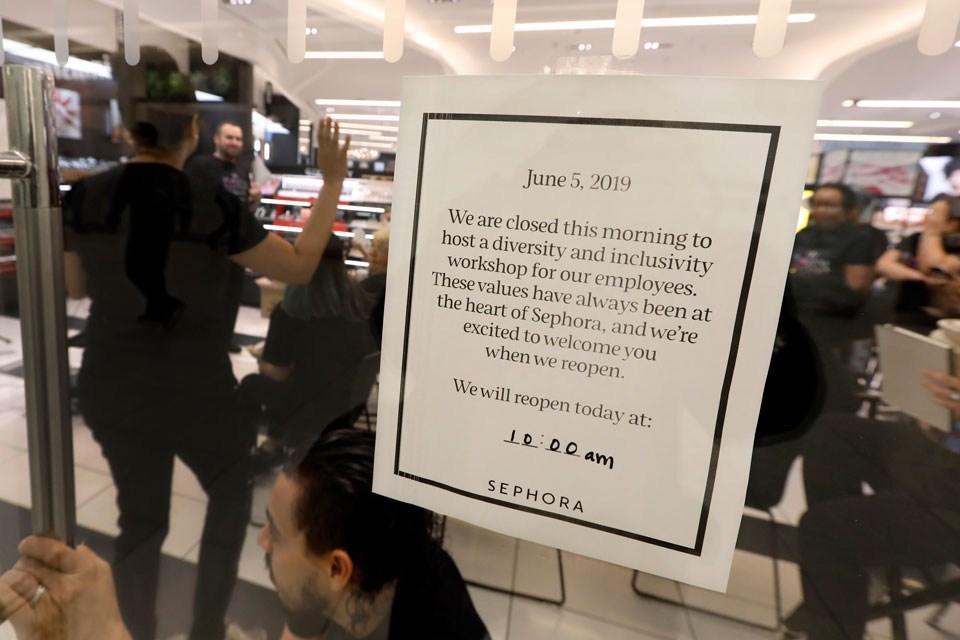 The beauty retailer said the training had been in development months before SZA's experience, which undermined the company's efforts to cast itself as a champion of diversity. Sephora, which apologized to SZA last month, said the incident "does reinforce why belonging is now more important than ever."

In addition to the store closures, the company said it would close its distribution centers and corporate office for the workshops to discuss what it means to belong in the context of "gender identity, race and ethnicity, age abilities and more." The stores will open to customers following the training.

Sephora provided few details about its workshops, which were closed to the public. The company said there would be more training in the future for employees but did not answer questions about what would be taught, who would conduct the workshops and or how they were designed.

Employees at a Manhattan location gathered at the front the store Wednesday wearing black T-shirts with Sephora's new tagline "We Belong to Something Beautiful," helping themselves to Starbucks coffee as they listened to a speaker. Employees would not speak publicly about the session.

Whether diversity training works is up for debate. Some businesses are rethinking their approach to anti-bias training in the wake of academic studies suggesting such programs have done little to improve workplace diversity, and in some cases, can backfire.

Sephora's initiative follows the closing of the more than 14,000 Starbucks stores in the U.S. last year for anti-bias training sessions after an uproar over the arrest of two black men for sitting at a Philadelphia Starbucks without ordering anything. That incident triggered protests, threats of boycotts, and eventually prompted the Philadelphia Police Department to announce a new policy on how to confront people accused of trespassing on private property.

While Starbucks also kept its training private, it released training materials showing that that employees were asked to break into small groups to talk about their experience with race. The program was developed with the NAACP Legal Defense and Education Fund.

Public reaction was more muted when SZA tweeted on April 30 that a Sephora employee had called security to make sure she wasn't stealing. SZA, who once appeared in an ad for the Fenty makeup line that Sephora carries, identified the employee only as "Sandy Sephora." Sephora responded with an apologetic tweet, saying it takes such complaints seriously.

Lmao Sandy Sephora location 614 Calabasas called security to make sure I wasn’t stealing . We had a long talk. U have a blessed day Sandy

Sephora billed the workshops as part of a new diversity-focused marketing campaign.

The company, which is owned by luxury group Moët Hennessy Louis Vuitton LVMH, has long made diversity part of its brand. Two years ago, the company helped launch Rihanna's Fenty line, known for its range of foundations that range from pale to deep brown shades.

In 2016, a pair of sociologists, Alexandra Kalev of Tel Aviv University and Frank Dobbin of Harvard University, published a paper in the Harvard Business Review based on a study suggesting that the effects of diversity training rarely last and in some cases foster resentment, in part because many companies use "negative messaging" in their training.

The study, which analyzed 30 years of data from more than 800 U.S. companies, found that the number of black and Asian managers declined among firms that relied on mandatory diversity training. The study found better results among companies where training was voluntary.

The Harvard Review paper said nearly all Fortune 500 companies use diversity training of some sort. Various firms have revamped their approach in recent years, including making it part of the onboarding process for all new employees, in part so that it will not be perceived as a punitive measure for bad behavior.

Audra Jenkins, chief diversity and inclusion officer at the employment agency Randstad US, said her company redesigned its own training program, which it now calls "conscious inclusion." She said every new employee is automatically registered for the training, which uses e-learning gamification to help people recognize bias and help them navigate them.

Jenkins said Sephora was right to send a swift message to its employees and customers in an era when social media amplifies missteps, but she cautioned that it can only be considered a first step.

"You have to come out publicly or you will get the backlash instantly," Jenkins said. "But one day is not enough to deal with years of issues. It cannot just be a message that goes away quickly because the employees will figure that out quickly."