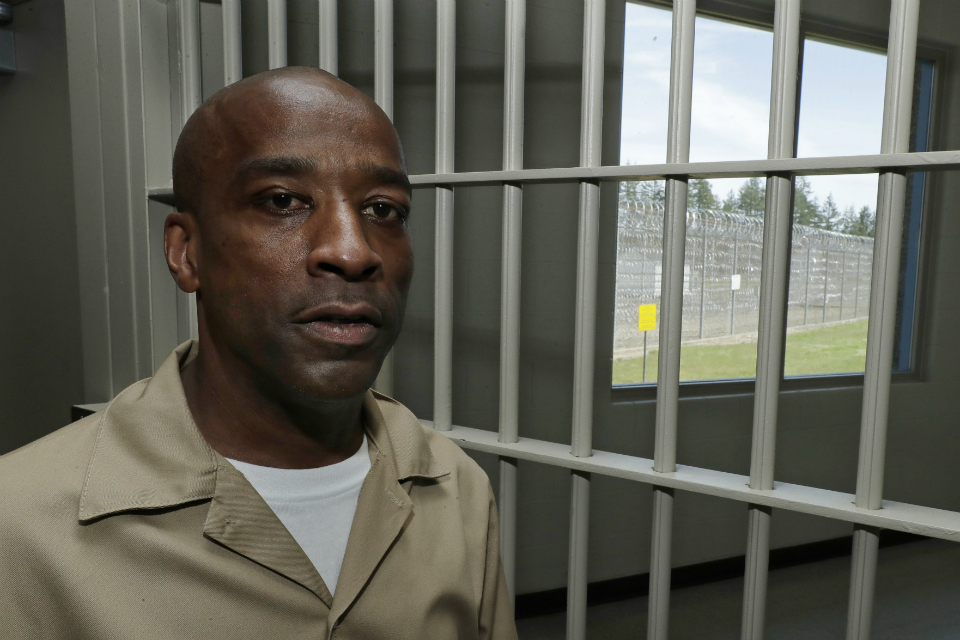 OLYMPIA, Wash. (AP) — A small group of inmates, disproportionately Black, are set to stay in Washington state prisons for life — left out of the latest in a multi-year wave of reforms easing tough-on-crime "three strikes" laws around the U.S.

At least 24 states including Washington passed such laws during the 1990s, embracing tough-on-crime rhetoric. But nearly half have since scaled them back amid concern that habitual but less-violent offenders were being stuck behind bars for life with hardcore felons.

Washington's 1993 three-strikes law was among the first and stands out as among the nation's strictest. Lawmakers targeted it for reform this year with legislation removing second-degree robbery — generally defined as a robbery without a deadly weapon or significant injury — from the list of crimes qualifying for cumulative life sentences.

The original reform made inmates sentenced under the old law eligible for resentencing. But an amendment pushed by a prosecutors' group cut out retroactivity. Washington governor and Democratic presidential contender Jay Inslee signed the changes into law April 29.

That means about 62 inmates convicted of second-degree robbery will be still serve life sentences, according to state records, even after judges stop "striking out" new offenders convicted of the same crimes. About half are Black, despite African Americans making up only 4% of Washington's population.

Under the original bill, the inmates with a robbery "strike" would have had the opportunity to have their life sentences re-examined by judges — but now they won't.

Supporters of the amendment have said even less-serious robberies can leave emotional scars, and that prosecutors might have set aside more serious charges because they knew second-degree robbery convictions would mean life in prison for those offenders.

But inmates among the 62 described frustration that offenders with similar records may face drastically shorter sentences going forward.

It's just wrong on its face, to make people rot in prison for the rest of their life on a sentence that doesn't even exist anymore.

"It's just wrong on its face, to make people rot in prison for the rest of their life on a sentence that doesn't even exist anymore," said John Letellier, 67, whose 1999 fast food restaurant robbery earned him his third strike.

The push to take out the reform's retroactivity clause emerged from the Washington Association of Prosecuting Attorneys, a group that represents prosecutors.

Russell Brown, the group's director, said he reviewed most of the cases listing second-degree robbery as the third strike, and believed that prosecutors in many probably refrained from seeking more serious charges because of the guarantee the charge — known in legal circles as "Rob 2" — would count as a third strike.

But he acknowledged that he never confirmed his suspicions with any of the prosecutors who handled the cases.

"You worked the deal with the understanding that the Rob 2 would count as a strike and they would go away for life," Brown said.

Three-strike laws — typically focused on handing out life or near-life sentences — surged in popularity in the late 1980s and early 1990s in response to peaking violent crime, driven in part by gang crime and the crack cocaine epidemic.

But a movement to reform the laws grew as backers cited the high cost of life imprisonment and the potential injustice of lumping lower-level offenders with violent predators, said Alison Lawrence, head of the criminal justice program at the National Conference of State Legislatures.

In Washington, second-degree robbery has one of the lowest seriousness levels of any crime on the three-strikes list, hypothetically encompassing anything from demanding money from a clerk to snatching a purse.

At least 11 states including Washington have eased their three strikes laws since 2009, often removing property crimes from "strike" lists or restoring discretion to judges over previously mandatory life sentences.

But lawmakers have also often been reluctant to make the three-strikes reforms retroactive: Out of the 11 only California has included such a clause, Lawrence said.

In phone and email interviews, inmates among the 62 in Washington described how the reform raised their hopes — and the amendment dashed them.

Among them is Devon Laird, age 54 and serving life on a robbery third strike.

Convicted of snatching a wallet from an elderly man outside a drugstore in 2007, Laird's court records include convictions for violent crimes in his early 20s, but also testimony portraying him as attempting to escape a past that included being stabbed at 14 and shot twice before age 21.

"When they said it wasn't retroactive, it really set in on me that, man, I got life," said Laird.

Cheryl Lidel, 60, is also serving life for a 2010 robbery after being convicted of other robberies and theft. She described her crimes as driven by substance abuse that began shortly after she was sexually assaulted as a young girl.

In charging documents for her third-strike robbery, prosecutors said Lidel was going through heroin withdrawal when she robbed a Subway blocks from a police station, sticking her hand in her pocket to imitate a gun. She then asked a taxi to take her to an area known for drug dealing.

With the exception of third-strike crimes, Washington hands out sentences using a formula that takes into account the number and severity of a person's previous crimes.

According to state guidelines, the maximum for second-degree robbery, given to the highest-level offenders, is less than seven years.

By comparison, a life sentence under the state's three strikes law is exactly that: Life, without the chance of release.

Some of the 62 might not have received shorter sentences because of other serious crimes on their record, including at least eight with early robbery convictions but a final strike for murder. But nearly half the inmates on the list received a third strike only for some form of robbery.

The bill's sponsor, Democratic Sen. Jeannie Darneille, said before the state's legislative session ended that she did not want to change her bill with the amendment killing retroactivity but that it would have been at risk of failing without support from law enforcement or prosecutors because lawmakers would have feared being labeled soft on crime.

Despite its low seriousness classification, second-degree robbery can still be traumatic, said Rep. Brad Klippert, a Republican who is also a police officer and opposed the reform altogether.

But advocates and the inmates themselves said making the law non-retroactive creates an inescapable disparity: Two prisoners with identical records could end up with vastly different sentences.

It's not fair "if new people don't get strikes," said Lawrence Fillion, an inmate serving life after a third-strike robbery.

"Yet I have the same thing and I am going to die in prison."