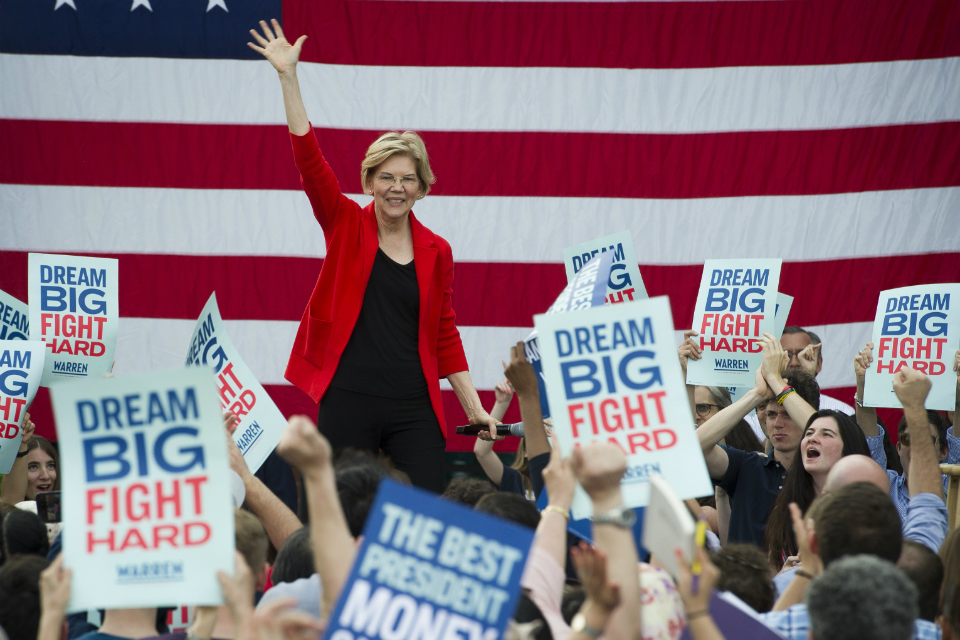 HOUSTON (AP) — Elizabeth Warren was the last of eight presidential candidates to take the stage at Texas Southern University last month when she was pressed for a solution to Black women dying during childbirth at far higher rates than White women.

The Massachusetts senator responded with what has become a campaign catchphrase: "So, I got a plan." She proposed holding hospitals financially responsible for the disparity, imposing penalties on institutions that don't act to prevent such deaths.

"Doctors and nurses don't hear African American women's medical issues the same way that they hear the same things from White women," she said. "We've got to change that, and we've got to do it fast because people's lives are at stake."

By the time Warren left the stage at the "She the People" forum, thousands of Black women in the audience were on their feet roaring cheers and applauding. The reaction eclipsed the response earlier in the day to Sens. Kamala Harris of California and Cory Booker of New Jersey — the Black candidates in the Democratic contest. It reflected the unlikely traction that Warren, a 69-year-old White woman who lives in tony Cambridge, Massachusetts, is gaining with Black women who are debating whom to back in a historically diverse primary.

To have an ally — she's a woman, but she's not a Black woman — who can speak intelligently and has thought about people who don't look like you, that resonates.

"To have an ally — she's a woman, but she's not a Black woman — who can speak intelligently and has thought about people who don't look like you, that resonates," said Roxy D. Hall Williamson, a 49-year-old who was in the audience. "She stole the show to me."

Since her appearance in Houston, Warren published an op-ed further detailing her maternal mortality plan in Essence, the country's only magazine for Black women with a circulation of more than 1 million. She wrote another piece on the significance of historically Black colleges for Blavity, a popular website aimed at Black millennials.

At this early stage, many Black women are undecided about whom they will support. Following Harris' January campaign launch, there was considerable excitement around her as the sole Black woman in the race.

Former Vice President Joe Biden is also winning the attention of some Black female voters because of his service to Barack Obama, the nation's first Black president.

In Warren, some Black women say they see kinship in a candidate who talks with substance and specificity about problems and solutions.

We are used to doing our homework and having to show up.

"We are used to doing our homework and having to show up," said Heather McGhee, the former president of the progressive think tank Demos. She said several of Warren's marquee issues — housing, child care and student debt — are ones that disproportionately affect Black women.

After a rocky start, Warren's campaign has stabilized in recent weeks, driven by an aggressive policy agenda that sometimes forces her rivals to take stands on such issues as breaking up massive tech firms and impeaching President Donald Trump. But she still lags Biden and Vermont Sen. Bernie Sanders in the polls.

But strong connections with Black women could help buttress her campaign. Black women are a crucial voting bloc in South Carolina, home to the South's first primary, and in the contests that will follow in delegate-rich states throughout the South. That's why Harris, Booker, Biden and Sanders are also feverishly competing for their support.

Warren has stumbled on racial issues, most notably when she was derided as racially insensitive for using a DNA test to address her past claims to Native American heritage.

But she has sought to put issues of race and class at the center of her campaign. Before announcing her candidacy, she gave the commencement address at Morgan State University, a historically Black college in Baltimore, focusing on economic disparities. On the campaign trail, she has already appeared at three HBCUs: at a town hall in March at Jackson State University in Mississippi; at Allen University in South Carolina to tout her plans around student debt and a $50 billion investment in Black colleges; and at Texas Southern University for "She the People."

Alexandria McMullen, a 30-year-old Black woman, voted for Sanders in 2016 but said she's now supporting Warren because of her outreach to African Americans. She was among 80 people who attended a recent event with Warren in Philadelphia and said few other White candidates have been able to talk as convincingly about race.

This story has been corrected to show the investment figure is $50 billion, not million.