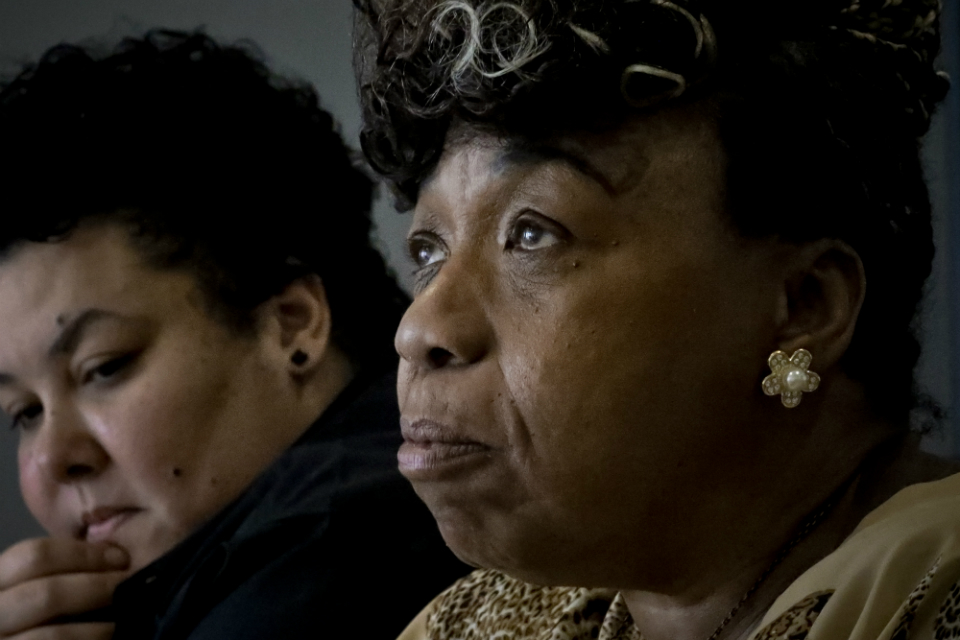 NEW YORK (AP) — The deadly confrontation five summers ago flickers in Gwen Carr's mind, competing for attention with warm, happy memories of her late son Eric Garner's life. For all the smiles and laugher they shared, there are flashes of Garner being grabbed by a New York City police officer and crying out: "I can't breathe."

Carr said she has been reliving what she pointedly calls "my son's murder" every day since his July 2014 death : Her first born succumbing to cardiac arrest after a white officer wearing plainclothes, Daniel Pantaleo, restrained her 34-year-old son with what she contends is an illegal chokehold and what Pantaleo's lawyer argues is an approved technique.

A long-delayed internal disciplinary trial that could lead to Pantaleo's firing is slated to begin on Monday. A ruling late last week requires the police watchdog agency bringing the case prove not only that Pantaleo violated department rules, but that his actions fit the criteria for criminal charges. Pantaleo does not actually face criminal charges.

Pantaleo and all those other officers who actually murdered my son that day, they are still collecting their salaries.

"It has been five long years," Carr told The Associated Press last week. "Pantaleo and all those other officers who actually murdered my son that day, they are still collecting their salaries. They still go home every day and it's business as usual with them. But with me, we relive this every day."

Video of the struggle on a Staten Island street corner quickly went viral, amplifying Garner's plaintive pleas of "I can't breathe" into a rallying cry in the face of police brutality against unarmed black men and women.

Pantaleo was placed on desk duty. Investigations were launched. The medical examiner ruled Garner's death a homicide caused by a police chokehold.

And then nothing happened.

Pantaleo has remained on the city payroll, stripped of his gun and badge but pulling in a hefty salary — peaking at more than $120,000 in 2017, according to city payroll records.

The NYPD argued the federal investigation was holding up Pantaleo's disciplinary case. Last summer, however, the department decided to move forward anyway. It will begin 1,761 days after Garner's death.

Pantaleo's administrative trial is open to the public, but space in the court-like room at police headquarters in lower Manhattan is limited. The police department won't allow video, photos or even a sketch artist. The trial is expected to take about two weeks.

The Civilian Complaint Review Board said it expects to call fewer than 20 witnesses. Stuart London, Pantaleo's attorney, said he'll bring up to 10 people to the stand. They include a retired NYPD training sergeant who London said taught Pantaleo an approved technique known as a "seat-belt hold" that is being confused for a chokehold.

Pantaleo's union, the Police Benevolent Association, has blamed the 350-pound Garner's poor health and resisting arrest for his death. Garner shouted at officers as they approached him, saying: "Every time you see me, you want to mess with me. I'm tired of it. It stops today. I'm minding my business. Please just leave me alone."

Garner, a father of six, had been arrested for selling untaxed cigarettes numerous times and was suspected of doing the same when officers approached him, police said. The man who recorded the video of the confrontation said that wasn't true and that Garner had just broken up a fight between two other men.

Garner, who had asthma, suffered a heart attack in an ambulance and was pronounced dead at a hospital.

The city paid Garner's family $5.9 million in 2015 to settle a wrongful death claim. Carr said that money went to Garner's wife, not her.

Use of force complaints against the NYPD have fallen sharply in the years since Garner's death, according to data compiled by the review board. In 2014, there were 2,412. In 2018, there were 1,764, marking a 27% drop. But alleged chokeholds have still been a problem. Last year, the review board reported receiving 133 chokehold complaints. So far in 2019, there have been 39.

NYPD Use of Force Complaints

The NYPD hasn't fired an officer for a fatal chokehold since Francis Livoti, who was dismissed from the department and convicted by a federal jury for violating the civil rights of a Bronx man prosecutors say died after Livoti used a choke hold on him in 1994.

A few weeks after Garner's death, 18-year-old Michael Brown was fatally shot by a police officer in Ferguson, Missouri. A few months after that, officers in Cleveland fatally shot 12-year-old Tamir Rice. Other confrontations followed between police officers and people of color, sparking tensions, calls for reform and nationwide protests.

Carr, turning to activism as a means of healing from her grief, lobbied for an executive order directing New York's attorney general's office to review cases in which unarmed civilians are killed by police. Gov. Andrew Cuomo, a Democrat, signed it a year after her son's death. She also wrote about her life and Garner's death in a book, "This Stops Today," published last October.

"All of this needs to stop," Carr said. "This is very important to me for Eric, but not only for Eric — for the other families, and for the families that we know will be."